His father is extremely anxious about his only son’s life, because if his education doesn’t continue as a priority, he will automatically be drafted into the army and sent to the Korean War (1950-1953) where he fears his much loved son will die. He has nightmares about it.

Marcus excels in the world of academia, admired for his straightforward approach and known for his strong opinions, which as we discover, he is willing to defend vigorously.

I just loved this movie, it is a very classy conversational film superbly realised by the director James Schamus, based on the 2008 novel by Phillip Roth a novelist mainly known for his irreverent and human portraits of American Jewish life.

Please don’t read any more, if you don’t want any spoilers. Marcus’s father Max Messner (Danny Burstein) is a ‘kosher’ butcher whom he helps out when he is at home. His mother is a lover of their faith and going to temple and despite their sometimes-suffocating presence, Marcus has learned how to get through each day while waiting for his life to begin.

He doesn’t discuss the Jewish faith he has been brought up in with his parents, because he knows they wouldn’t understand his own personal stance. He has decided he is an atheist, lacking belief in the existence of God.

Two unrelated incidents puzzle us near the beginning of the film; an elderly lady staring at wallpaper with red and white roses in a tole jug all over it, and a scene between soldiers in Korea, where in the dark and gloom of a ruin they kill each other and die.

Back in 1951 we discover that the young Marcus is both avoiding the draft and escaping his suffocating overprotective father at the same time, arriving at college to become part of the graduating class of 1955. He has won a scholarship and is taking his studies seriously.

He is put into a three-bed dorm room with two other Jewish young men. One a lover of Shakespeare a young man still hiding in the closet, while the other could only really be described as a jarhead of sorts.

For such a serious young man as Marcus is, they are really more than he can bear. Eventually he asks the college office may he move, finding himself up alone in room high up in the roof, which makes him happy. He’s not a team player, does not want to be involved in sport, taking his studies seriously.

Ironically Marcus finds himself compulsorily compelled to regularly attend Chapel like all the other students; it’s compulsory if they want to graduate.

Worshipping the Christian religion in such a way is extremely offensive to Marcus and he sees the whole exercise as a complete waste of his time. When he’s given an alternative, where you pay someone to attend on your behalf, despite knowing it is wrong, he finally gives in and takes it.

He doesn’t adhere to the courage of his convictions and this becomes the point where he is tested on every level and fails, not knowing the decision will ultimately have deadly consequences. American actor Logan Lerman is indeed impressive as Marcus. In many scenes he’s entirely mesmerizing, as he reveals his vulnerability and strength. Passionate and passive, Marcus embraces a pursuit of pathos; that inner universe where we remain subject to the mystery of our positive and negative irrational feelings while celebrating man’s heroic qualities in harmonious proportion.

He’s completely convincing as the young academic with an incredible gift for communicating his own feelings with great clarity, capturing and holding our gaze as he clearly and decisively communicates his dissatisfaction.

At Winesburg Marcus soon begins a relationship with one of his classmates Olivia Hutton (Sarah Gadon). An attractive blonde with a creamy complexion, she turns out to be well experienced in giving young men of her acquaintance, hand held relief from their sexual frustrations, which doesn’t endear her to him at all, just entirely fascinates him and he becomes infatuated

His analytical mind leads him to believe her actions are ‘because her parents are divorced’. In fact, he is quite sure her behaviour is not that of a well brought up girl, and certainly not the kind of young woman his parents would want him to make any sort of permanent connection with, particularly as she bears the scar on her wrist from an attempted suicide. Marcus is slightly in awe of her sexual forwardness, which continues in the privacy of his hospital room during his recovery from an operation for appendicitis.

He has ended up being operated on following an extensive and lengthy clash with the college’s imposing Dean, Hawes Caudwell (Tracy Letts) after which he throws up in his office, not realising how ill he was.

The Dean is fascinated too by a young man he cannot manipulate as he is used to doing with other students, who are usually overawed by his presence and power. His lengthy, confrontational and tenacious téte a téte argument with Marcus is both funny and fearful at the same time. 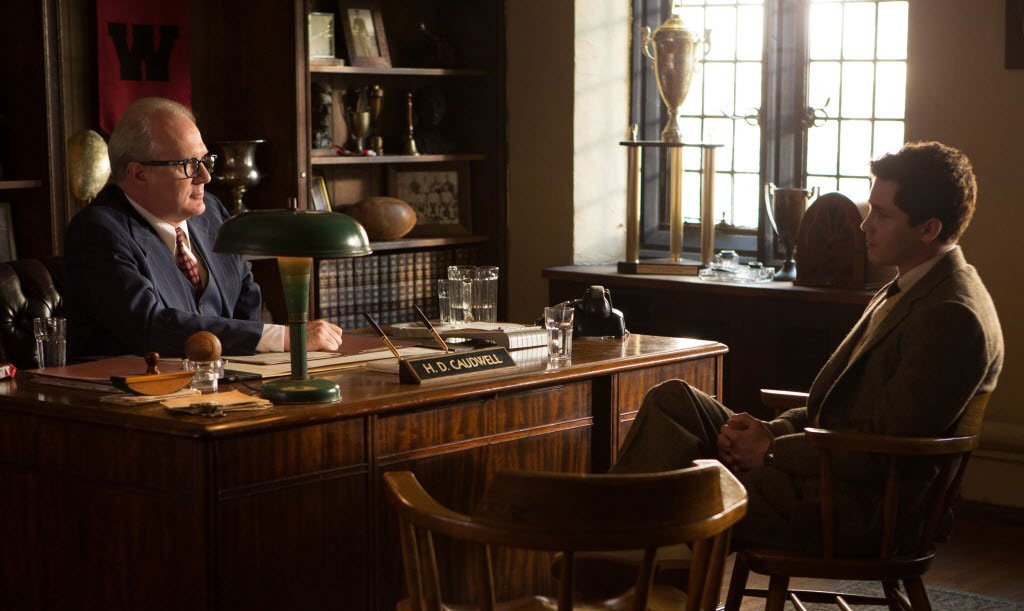 In fact Marcus debates the Dean on the issues of his rights and the personal freedoms they disagree about, all to his master’s consternation.

He stands up to him boldly, strongly going where no other student has gone before and their meeting is a virtuosic highlight that lasts for nearly twenty minutes of unrelenting dialogue. It is brilliant to behold, all brought to an end when Marcus collapses.

In hospital Marcus continues being completely beguiled by Olivia and her cool calming presence. She visits him regularly as he gradually recovers, bringing red and white roses, putting them into a tole jug for display on a side table.

She ministers each time to his special needs, handing him a flannel to wipe himself before disappearing with it into the bathroom.

There are a number of well-drawn portraits in this, including his parents who seem careworn and considerate until the scene between Marcus and his Mother Esther Messner (Linda Emond), which does not fail to disturb.

Having met Olivia in his hotel room and noticed the scar on her wrist, she insists her son cease contact with the young woman immediately. She extracts a promise from him that he will find a partner in life who is equal to him in every way and not takes on someone who has already so much baggage at a young age.

Sadly enough we see the point she is making as we come to understand where Marcus has inherited both his fortitude and commitment from. Esther is enormously formidable, cool and calculated when it comes to her son and guiding him in life. The film looks wonderfully in period, with careful attention given over to detailing scenes from cars to soft sweet cardi’s and fabulous fifties costumes, square hairstyles to hats and the consideration surrounding the bric a brac decorating the Dean’s office.

Sadly Indignation has only one way to go.

Marcus who does not give in once he’s made up his mind is finally expelled for failing to go to Chapel, the Dean out to bring him down in any way he can. A complication for him is that Olivia is pregnant, but Marcus declares he couldn’t be the father as they have not had intercourse. Although the Dean knows its not quite as simple as that.

Sent to Korea Marcus is the soldier who falls victim to his father’s fears and the movie is narrated by him from heaven. If only he had learned the art of compromise, Marcus may have ended up graduating with the rest of the class of ’55 when the Korean war already over.  Olivia is left staring at the wallpaper on her room debating with herself perhaps, that Intelligence is not always enough.