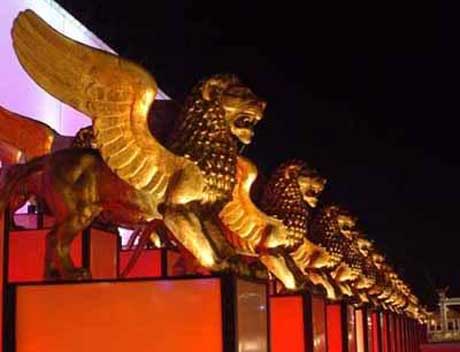 The Cinema event is an integral aspect of the Venice Biennale. For over a century this has been one of the most prestigious cultural institutions in the world. The history of the Venice Biennale dates from 1895, when the first international art exhibition was organized. In the 1930s new festivals were born: music, cinema, and theatre (the Venice Film Festival 1932 was the first film festival organized). In 1980 the first International Architecture Exhibition took place at the Venice Biennale, and in 1999 Dance made its debut at the Venice Biennale. Venice’s symbol is the winged lion of its patron St. Mark, whose remains reputedly rest in this watery wonderland. The winged lion became the logo of the Venetian Republic centuries ago and wherever Venice ruled the Lion traveled. Today it is the whole world who travels to Venice, surely one of the most romantic cities on earth. They come to explore and experience its many mysteries and in this case, to get caught up in the world of movies, which are to be released in the months leading up to the Christmas holiday season. The Guardian in the U.K. revealed that actor Colin Firth noted that there is still a ‘tendency to underestimate audiences’ and that generally ‘people want to hear language at its best on screen’. The success of the brilliantly scripted powerful 2010 word movie, The King’s Speech informs his point. Firth according to reports made his comments at the premiere of the all-new movie version of controversial English spy novelist author John le Carre’s brilliant work Tinker Tailor Soldier Spy at Venice. This movie would, by the very nature of its original conception, demand complete concentration from the great cast of character actors that have been assembled to bring it to the big screen.

The original spy series in the seventies on television starred legendary actor Alec Guinness (1914-2000), best known to the current generation as old Obi One Kenobi in Star Wars. His extraordinary performance in the series made in 1974 has been the reason the movie world has steered relatively clear of endeavouring to find that special someone to fill his very big shoes as the middle-aged intelligence expert in forced retirement, George Smiley. He with the cult following, British actor Gary Oldman (Harry Potter Series and Batman Trilogy), is probably one of the few actors around who could not only accept such a challenge but also get up and run with it. He is seemingly capable of portraying many characters, has the maturity, the presence and the recognition of his contribution to cinema, voted an ‘Icon of Film’ in 2011. 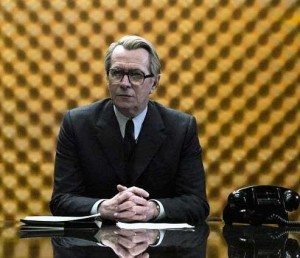 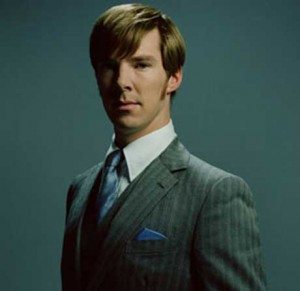 Smiley is working for MI6 during the cold war. He must discover the identity of a mole at the highest level of the Secret Service, known internally as the Circus. Oldman’s many memorable roles have included portraying villainous and completely psychopathic chilling characters and this is one he should revel in playing.

The taciturn shrewd Smiley was the antithesis of Ian Fleming’s James Bond. He was a spy who lived in the bleak cold hard reality of the world of espionage as played out against a backdrop of dark places and institutional corridors of power, as opposed to James Bond’s glamor girl ridden, luxury driven world.

Author John Le Carré Smiley’s creator praised Oldman’s performance and the new movie. It is mainly set in 70’s London where buildings still bear the burn marks from the blitz and the temperature drops to almost Baltic levels. Budapest and Istanbul are other exotic locations for this all-new thinking person’s take on le Carré’s riveting thriller. 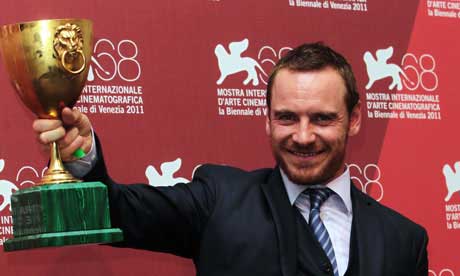 German born Irish actor Michael Fassbender (Inglourious Basterds, Jane Eyre & X-Men First Class) is an actor whose enormous flexibility, wonderfully expressive face and enormous talent suits many roles. He is much in demand. His is an extraordinary range from playing in a romantic period piece to a futuristic pop culture hero or a contemporary age finely drawn character.

Fassbender was up for awards at Venice for both Shame and the visually beautiful period piece Dangerous Methods. The latter is a story that features two of the 20th centuries influential thinking men with the most driven intelligent minds; Sigmund Freud (Viggo Mortensen) and Carl Jung (Michael Fassbender). The movie covers a period where Jung was communicating well with Freud, who was acting as his mentor, until their very intense relationship broke down irretrievably. 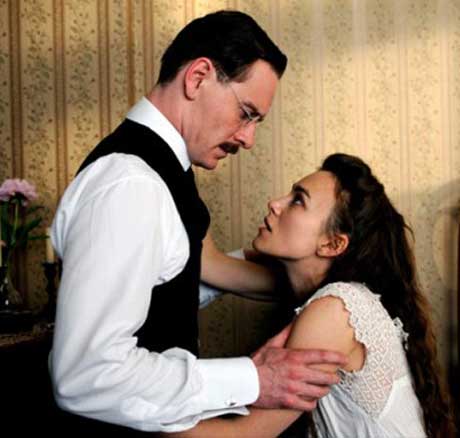 This was when their views on psychology and psychoanalysis began to diverge and take quite different directions. The movie puts forward the notion it was a woman who came between them, Sabina Spielrein (Keira Knightley).

Jung is always thought to have had a relationship (between 1904 -1912) with Sabina, who was at first one of his patients and then later a colleague, when she graduated as one of the world’s first female psychoanalysts. Killed by a Nazi ‘death squad’ in 1942 Sabina’s journals letters and her correspondence with both Jung and Freud were later published. They reveal that her views on psychoanalysis, while considered a footnote to history did seemingly inspire both men’s creative ideas.

Filmed on location in Vienna, Zurich, Konstanz, Cologne and Berlin the film is set in the elegant period encompassing the halcyon days just prior to World War I. It is visually sumptuous, adapted from a play by Chrisopher Hampton, best known for his Academy Award winning adaptation of the novel Les Liaisons dangereuses and Atonement.

Shame was co-written by Abi Morgan (2011 BBC2 The Hour, The Iron Lady) and co-written and directed by Steve McQueen.  It is the second movie for Michael Fassbender shown at Venice. For his role as the 30-something man living in New York City whose sexual exploits have disturbed many, he won the prestigious Coppa Volpi award for Best Actor.  Shame, as the synopsis tells us, is a drama that tells the story of what happens as a troubled young man’s world spirals out of his control when his wayward young sister comes to live with him. It takes sexual addiction to a whole new level in a movie that reputedly had the audiences squirming in their seats. This was because as McQueen says, it has ‘not been shy’ at showing the darkest, most perverted, explicit and self-deprecating side of sexual human behaviour. A challenge for both actors and audience. 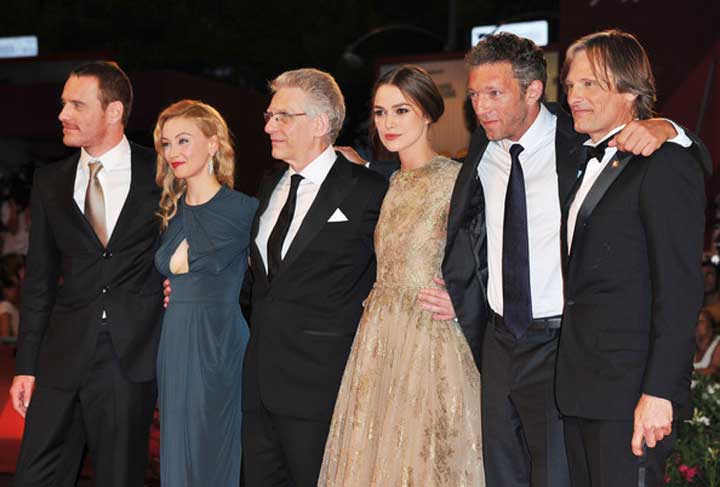 At Venice 2011 the Awards went to: Golden Lion for Best Film to Faust by Aleksander Sokurov. Silver Lion for Best Director to Shangjun Cai for the film Ren Shan Ren Hai. Special Jury Prize to Terraferma by Emanuele Crialese. Coppa Volpi award to the best actor to Michael Fassbender (in the film Shame) and as best actress to Deanie Yip (in the film Tao Jie). Marcello Mastroianni Award to Shôta Sometani and Fumi Nikaidô (in the film Himizu)