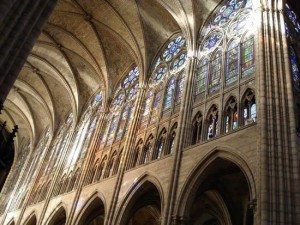 The Abbot Suger at St. Denis near Paris developed the Early Gothic style of architecture from 1137. It was a system of great structural ingenuity and Suger is attributed with inventing the pointed arch and pioneering the use of glass in a high range of clerestory windows to the south and north that enabled the roof to be filled with light. Delighted with the effect he drew up an inscription to the glory of Light, which he engraved inside the abbey church; …the heart of the sanctuary glows in splendour that which is united in splendour, radiates in splendour. And the magnificent work inundated with a new light shines. It is I, Suger, who have in my time enlarged this edifice, under my direction it was done. To Suger visible things were ‘material lights’ reflecting the infinite light of God. His new enlarged Abbey Church at St. Denis was logically laid out to accommodate as many believers as possible. He also said ‘while light is necessary for the worthy glorification of God, the largest possible number of the faithful must also be able, without jostling, to approach and contemplate the Holy Relics on feast days. Suger further developed the aesthetic of the ascent from the material (light from the windows and precious stones) toward the spiritual (the light of God). Benedictine monks educated thirteenth century Italian scholastic philosopher and theologian Thomas Aquinas who tried to combine, and reconcile the ancient Greek philosopher Aristotle’s scientific rationalism with Christian doctrines of faith and revelation said that ‘beauty is the light of truth’ and at its best French Gothic Cistercian architecture has been described as an ‘intelligent, correct and magnificent interplay of volumes yet assembled under light’. In the Christian ethos the inner life was supreme, and this translated into a massive outpouring of creative expression and energy all cast in stone. With the onset of the period in Italy now known as the Renaissance noble patrons, as well as distinguished clerics, shared a vision for grandiose concepts. God was the great Architect of the Universe, a concept first recorded in illuminated manuscripts, which apart from its theological implications provided visual evidence of the high status enjoyed by those involved in the building of his house. 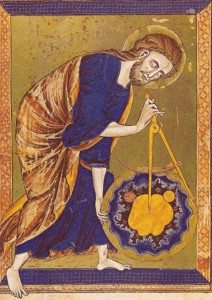