Designing 007: Fifty Years of Bond Style is an exhibition running throughout the Australian summer at the Melbourne Museum opening 1st November 2013.

James Bond 007, British spy, bon vivant, man of action, style and so much more, brings about bloodshed and multiple deaths in both sunshine and the snow, while operating under cover in more ways than one. From Jamaica in the West Indies for Dr No and on the rooftops of the Market Place in Istanbul for Skyfall, Bond films are pure escapist entertainment produced by the most successful movie franchise in the world.

“Bond, James Bond”, has been a suave silver screen hero for over five decades. He has made an indelible mark on the worlds of art, design, music, fashion, technology, travel, automotive design and lifestyle. 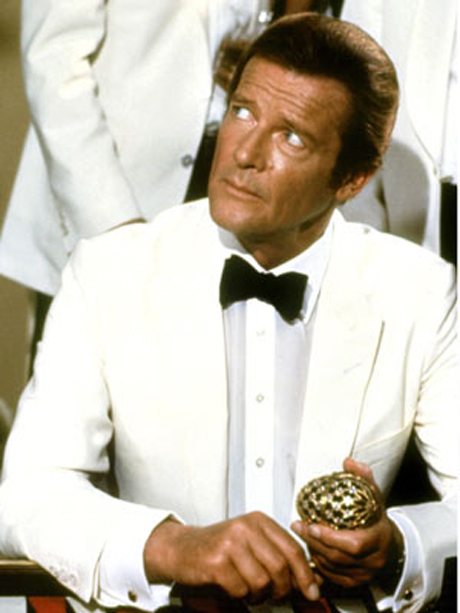 The show at the Melbourne Museum‘s main aim is to celebrate the world of innovation and action and compliment the world of style and sex appeal, by providing an inside view of the world’s favourite secret agent Bond, James Bond.

It is the result of a collaboration between the Barbican Centre, London and EON Productions which produces the film series has been guest-curated by fashion historian Bronwyn Cosgrave and Oscar®-winning costume designer Lindy Hemming.

The whole ‘set’ if you like, has been designed by Ab Rogers, who was given unprecedented access to EON’s production archive. It should be great fun for adults and kids alike.

Visitors will be taken on a multi-sensory journey, through a dozen themed rooms and environments. The objects on display we are promised will be ‘unforgettable’.

Roger Moore’s white tuxedo from Octopussy
Spacesuit from Moonraker
Scaramanga’s golden gun from The Man with the Golden Gun
Jaws’ fearsome teeth, which first appeared in The Spy Who Loved Me Gadgets from Q Branch, including the attaché case given to Bond in From Russia with Love

And, let’s not forget the pièce de résistance – Bond’s 1964 Silver Aston Martin DB5 from Goldeneye, which famously returned to the screen again in Skyfall. The old adage ‘sex sells’ works, especially when actress Ursula Andress as the first ‘Bond girl’ Honey Ryder rose out of the sea and walked up the beach wearing her stunning two-piece white bikini, with a holster bearing a knife.

Honey not only did her bit to help England ‘save the world’, but also inspired the fashion industry, while helping Bond played by Connery, to become a ‘sex symbol’ (although his looks and physique helped).

Handsome with brooding good looks, fabulously fit physique, a man of action who gives a convincing portrayal of internal pain, as well as a steady and very steely determination to overcome all the obstacles put in his path, he proves Bond is more than just an object of desire.

It was on his battered Royal portable typewriter that author Ian Fleming first wrote: ‘the scent and smoke and seat of a casino are nauseating at three in the morning, James Bond suddenly knew that he was tired’ the first words of the first Bond novel Casino Royale, published in 1953 the year of Queen Elizabeth II’s coronation.

For James Bond aka Daniel Craig it was a ‘Happy and Glorious” iconic moment for Bond when Queen Elizabeth II said “Good Morning Mr Bond” as she welcomed her most famous Secret Service agent 007 to her study at Buckingham Palace as part of the Opening Ceremony for the Olympic Games 2012. Ian Fleming described his aim for the Bond novels as ‘getting intelligent, uninhibited adolescents of all ages, in trains, planes and beds, to turn over the page’. In so many ways he wanted to inspire them to create a far ‘better world’ for everyone, just like his hero James Bond.

Fleming and Bond have together become a household name because the author did not compromise any aspect of his design or style in a world that had become so used to making do throughout World War II. He surely could not have foreseen what a successful spy hero 007 would become, and what a powerful impact he would have on not only design and style, but also both social and cultural evolution.

His uncompromising attitude is one the franchise principals share, ensuring that their hero remains always at the top of his game. Its hard to keep standards high, but they have succeeded and long may they do so.

Bond style and the movies have been taken to new heights with the first screenplay not adapted from a book written by Fleming, Skyfall, which was written by  Neal Purvis, Robert Wade and John Logan.

Adele’s powerful song Skyfall also helped as did the cast and crew… the amount of jobs the franchise creates is astonishing. Will be great to see what happens next !

And, if Daniel Craig is not at the Melbourne Museum? Well, don’t know about you –  I can’t wait to see the ‘car’!