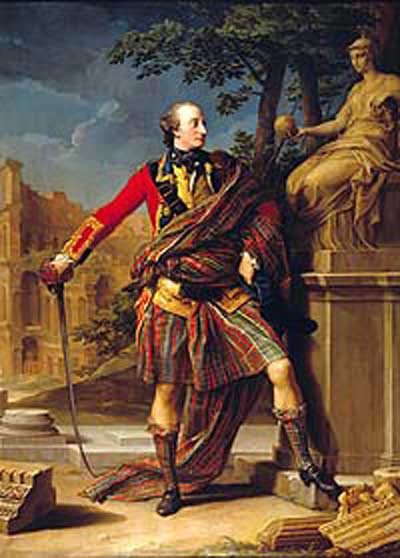 That astute observer of history Scotsman James Boswell (1740 – 1795), friend and biographer to one of the most distinguished ‘men of letters’ in English history Samuel Johnson, like many of his friends and colleagues, managed to enjoy traveling on the Continent between 1763 and 6. Boswell recorded in his journal that on Thursday, April 18, 1765 he visited the studio of portrait painter Pompeo Batoni at Rome. There he was able to view an extraordinary portrait in progress of a recent acquaintance another Scot, General Hon. William Gordon (1730/37–1816), who gained the rank of Colonel on 26 July 1756 in the service of the 11th Regiment of Dragoons. Gordon later in life became a Member of Parliament (1774) and Groom of the Bedchamber to King George III (1775). Batoni painted the Colonel wearing his military Tartan swathed dramatically with his sword drawn. At the time the portrait was being painted he was in defiance of the law but after all, he was in Italy, perfectly posed as a dashing fellow, with the Colosseum behind him, a statue of the goddess Roma at his side, and fragments of an ancient ruin at his feet looking for the entire world as if he has just conquered the city of Rome as payback. In a way he had, along with all his other companions and Grand Tourists of the time who were on a conscious quest for pleasure,  culture and with an objective for setting foot on classical ground. James Boswell came from an aristocratic Scottish family. When he was 18 he ran away to London in the spring of 1760 and had a fateful meeting with Dr. Johnson. It took place on the 16 May 1763 at Tom Davies Bookshop in Russell Street. They became instant friends with eventually Johnson calling him ‘Bozzy’. By all accounts Bozzy was a handsome fellow, with an engaging character and great deal of charm evident in his portrait by George Willison painted during the early summer of 1765. The biography records the first conversation between Johnson and Boswell Boswell: “Mr Johnson, I do indeed come from Scotland, but I cannot help it” Johnson: “That, Sir, I find, is what a very great many of your countrymen cannot help” In 1773 Boswell and Johnson shared a tour of the Hebrides. Boswell published an account of their journey in 1785, including a description of Johnson merrily swinging a broadsword and wearing traditional Scottish garb. For much of James Boswell’s life his father despaired of him. He didn’t follow his father’s profession and practice law, preferring his writing above all. However he did became 9th Laird of Auchinleck, but in the end his years of enjoying the good life finally caught up with him. 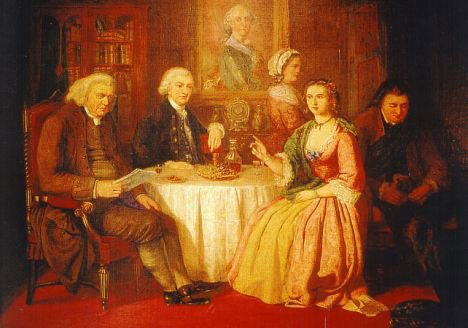 On our You Tube Channel you will find our mini-documentaries, which provide an insight into the evolution of art, design, music, fashion and style.