Being in the right place at the right time can reap rewards. Jamie Allpress of Allpress Antiques at Malvern in Melbourne has been in the antique trade since the late 1970s, where he started as a child in his local antiques shop. In an interview with Jamie recently, he told me that he remembers meeting his boss’s main English buyer back in May 1979.

To a young man in the trade, the boss seemed to him to be very old then. However Jamie, now enjoying his middle years, still used him as a spotter in London until he passed away just a few years ago. Now in 2013 Jamie has his son as his main spotter in the UK, which is part of an ongoing tradition in the world of antiques because as businesses, at least in the past, they were often passed down from father to son.

The new spotter, learning at his father’s knee, has a vast knowledge of the antiques trade in Europe and so he tips Jamie off if anything important is about to happen. When he tells him the time is right Jamie reacts quickly and jumps on a plane so that he can be there, before even many of the local dealers know about it.

Subsequently Jamie reports he has recently made some incredible purchases because over the past decade, many of the older dealers in UK have either retired or passed on to that happy hunting ground for treasure trove keepers in the sky. In his years in the trade Jamie Allpress has garnered a great reputation for his honesty, integrity and complete commitment to presenting the very best of French and English antiques for his clients to choose from. 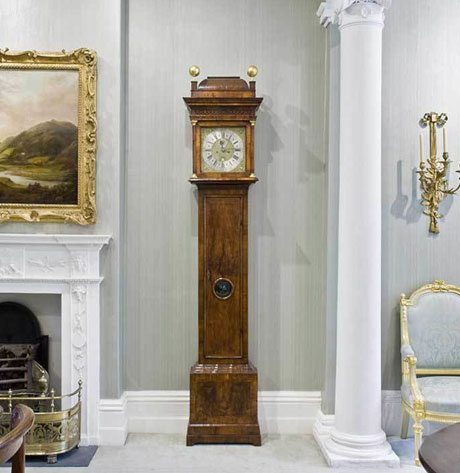 Jamie often gives talks to interested groups and in 2010 was invited to give a makeover to Melbourne’s ‘Johnston Collection’, a house museum of antiques at East Melbourne, which is a legacy of furniture, art and objets d’art left by antique dealer William Robert Johnston (1911-1986) for expanding knowledge in the city of Melbourne.

He said ‘there were several exceptional pieces in the collection and the eighteenth century English walnut long case clock was my favourite.

From a narrow hallway I moved it to the drawing room, where it had ample wall space and was immediately visible when entering the room’

In February this year Jamie was excited when he landed in Australia his best container in 25 years.

Among the wonderful array of furniture and art, were no less than eighteen 17th – 19th century English oak dressers, some of which came complete with their original tops, while some others had lost them years ago.

Jamie suggests it is always desirable to keep the tops and bottoms of an English country dresser together if possible.

However he also acknowledges that many people today just don’t want what they perceive as an ‘old fashioned country look’. Instead they want to buy the base so that they can use it in a sophisticated contemporary city setting where they make a compelling statement about the past and present happily co-existing. 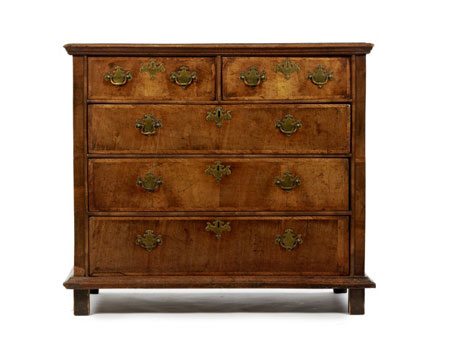 He has sold the tops of the dressers to other people,  who then mount them on a wall in another room quite separately, could be a kitchen, study, family area whatever they decide.

They can provide a very unique book or display shelf, with great effect.

Jamie remembers years ago yearning to be able to afford to stock just one country dresser, because basically he couldn’t afford to buy any in the strong English market. But now he has purchased eighteen?

This is because many of Jamie’s international associates are retiring. All these came from just four English dealers, who were winding up their businesses and retiring.

The Australian market is the exact opposite to the UK, even though a little slow, the higher end of the market here is still strong. If you have the best stock available in the world at lower prices as it has been in recent years, then the demand is, and remains strong.

On a more recent trip in May. Jamie said he purchased ‘the very best collection of antique (period) walnut furniture’ that he’s ever had. There’s a nineteenth century Staffordshire cow creamer, a quirky appealing object, one that appeals to many ceramic collectors. as well as a superb collection of very stylish Regency period water colours of a great variety of birds.

The latter had all been cut out and glued to very thick papers back in 1828. Jamie considered that they were so special he carried them home in his luggage, along with a perfect example of an 18th century map of Australia by Jacques Nicholas Bellin dated 1753.

The map has since been framed and Jamie says it ‘looks just great’.

The birds are also being cleaned and they will be framed in time for the arrival of Jamie’s new and fabulous walnut furniture laden container in mid-July.

It will arrive in time for inclusion on his stand at the AAADA Sydney Antique Fair that will take place from August 21 – 15, 2013 at the newly furbished Royal Randwick Racecourse.

A gala preview of the show will be held on Wednesday evening 21st August 6 – 9 pm. The fair will be open from 11 am to 7 pm on Thursday 22 August to Saturday 24 August and from 11 am to 5 pm on Sunday 25 August, so be sure to call by Jamie Allpress’s stall and say hello.

You will be sure of a warm ‘walnut glow’ welcome.

‘Under the skin: illustrating the human body’ at RCP London Feb 1- March 15, explores the art and science of anatomical illustration, medieval world until today