Jamie Allpress of Allpress Antiques at Malvern in Melbourne, enjoys collecting charming ceramic jugs, which were originally created to hold liquid. I share his passion, especially for well-shaped jugs that can be used to hold fresh flowers stylishly.

What all Jamie’s jugs have in common is that they have played both a practical and aesthetic role in our social and cultural evolution for centuries.

Ceramics, like so many other disciplines in the arts cannot be viewed in isolation, but in their relationship to other arts and the society and culture of each age.

All the jugs Allpress Antiques has on show have either been thrown or moulded and decorated in a variety of numerous ways; they are prettily and perfectly painted both under and over the glaze, transfer printed or have moulded and applied sculptural relief of varying depths (dependant on dates produced).

This early nineteenth century English stoneware jug is an example of the classic cameo technique, where it looks like the white sculptural layer stands proud and in relief of the body and has been carved back to reveal the vibrancy or subtlety of a vibrant background colour.

In this case it’s a bright apple green, a colour made popular during the neoclassical period under the influence of the Scottish born London based architect Robert Adam (1728-1792)

It is unusual, with its tall elongated shape and pouring spout that stands high and proud. It has a handle that looks like the extension of the trunk of a tree that spreads out on the body of the jug to protect the people below. 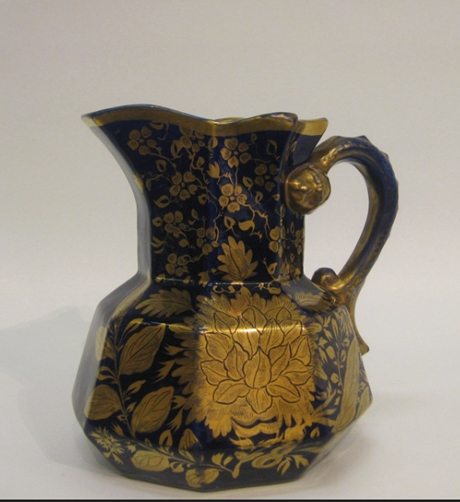 Jamie’s jugs come in all shapes, sizes with varying types of ceramic bodies. They include stoneware and porcelain from soft paste to hard paste. This describes the type of body Europe invented to copy the Chinese method of making what was considered for centuries a magical ware.

The factories Jamie’s jugs come from all reached different standards of achievement in both aesthetics and production. Prices can vary greatly, depending on their rarity, unique shape, type of body and style of decoration.

Some are very stylish, so very city. Yet others are so unique they are in a category all of their own, having attained the realm of art. All Jamie’s jugs are antiques, and so condition is important and also provenance, where the jug has been since it was made. If the object has been in the collection of a celebrity that can add significant value to the price.

Many English, French or European factories reached a high pinnacle of achievement before closing and some wares are hard to find while yet others have become very rare.

There are many different ways of identifying the factory where a jug was made. The body of the ware, the foot rim, how it has been shaped and finished and what the marks on the foot, if any, mean is generally a good place to start.

The colour of the body, the glaze and the way the decoration has been applied is also pertinent. 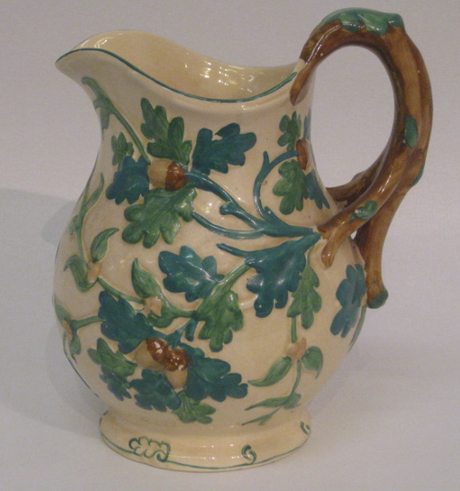 Some factories released certain designs on specific dates that are recorded, so many can be identified in this way as well.

Jamie always has a great supply of Masons Ironstone wares from different periods of its manufacturing cycle on display.

This charming Masons oak patterned jug dates from the early 20th century. It’s delightful foliate decoration and handle inspired by a branch on the oak tree, would look wonderful in many different settings.

Charles James Mason born in 1791 was one of several manufacturers who developed “Ironstone China” which he patented in 1813. 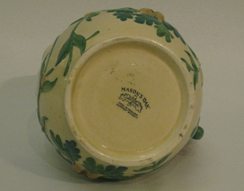 This hard durable earthenware was made from clay from Cornwall, ironstone slag, flint and the blue oxide of cobalt.

This produced a hard, opaque, bluish white pottery with a smooth, glossy finish.

Initially it was used for industrial strength tiles and later for ornamental wares. When Masons patent expired in 1827 other potteries also introduced their own versions of Ironstone China. Ironstone was all about providing a viable alternative to porcelain, one that looked like the product everyone wanted to own. It was less costly and stood up to a lot of wear, which is the perfect material for products to be used domestically.

This charming small Masons ironstone jug with its green twig handle has decoration inspired by much of the Chinese and Japanese porcelain flooding into Europe via the burgeoning eastern trade in the nineteenth century.

Fine porcelain wares from China had been coveted in Europe by the aristocracy for hundreds of years. Their translucency and fragility meant that they were generally only put on display as a sign of wealth and status. 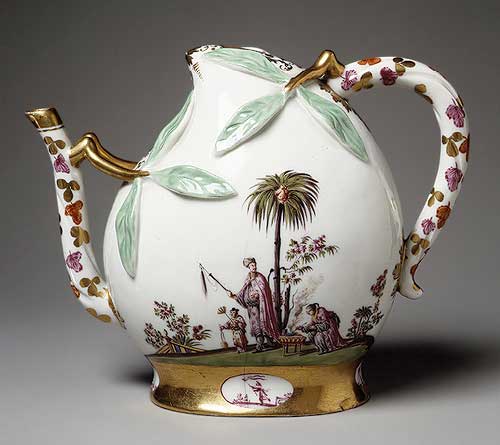 Viable alternatives that looked like porcelain emerged in Europe in the early eighteenth century at Meissen in Germany.  This happened at the time when the middle classes were expanding enormously.

Augustus the Strong, Elector of Saxony, a powerful  prince  with  a  passion  for  porcelain, together with Ehrenfried Walther von Tschirnhause a distinguished physicist and natural  philosopher and Johan  Frieddrich  Bottger a young  alchemist of  dubious  reputation, came  together in a unique  relationship to produce hard, red stoneware  – their idea of  porcelain.

At the Leipzig Easter  Fair of 1710, Meissen exhibited for the first time and while the factory owners thought their wares wonderful, the public was lukewarm, lampooning them at first because they were so unsophisticated. By 1713 that state of affairs had been rectified. Meissen was pouring out sophisticated stonewares of great beauty people began clamouring to own.

While some of Jamie’s jugs are sophisticated, some are very naïve and yet others are rusticated, so very country like this rare nineteenth century English oak tree and vine ceramic jug.

It has a zinc lid and pressed shaped acorn and leaf handle and is quite unique.

It looks like something that came out of the ‘Black forest’ or was perhaps inspired by Robin Hood’s Sherwood forest, with its warm mustard colouring, applied vine decoration and solid shape.

The European wares Meissen produced, followed by many other factories that we refer to today as porcelain, looked much like the Chinese wares they were trying to copy. They came quite some time after earthenwares and the more sophisticated stonewares, and by 1720 the Meissen factory was increasing production of its new porcelain. The basic materials for ceramics are mineral-rich clay, containing kaolinite (Al 2[Si 2O5][OH] 4), silica and feldspar all elements that occur naturally in soil and sedimentary rock and can be used for modelling. The crystal structure of these minerals allows them to adapt easily and readily to change. The shaping, molding and modelling of the clay means it is possible to create every thinkable shape that will not decay during the firing process.

Feldspars are aluminosilicates containing sodium (Na), potassium (K) or calcium (Ca), fluxing agents that reduce the melting temperatures of the silicates. These harden the object, and after blending all the raw materials according to special recipes, the vessel is formed. It is the firing of the ceramics in a kiln that makes them water-proof and durable to a certain extent. 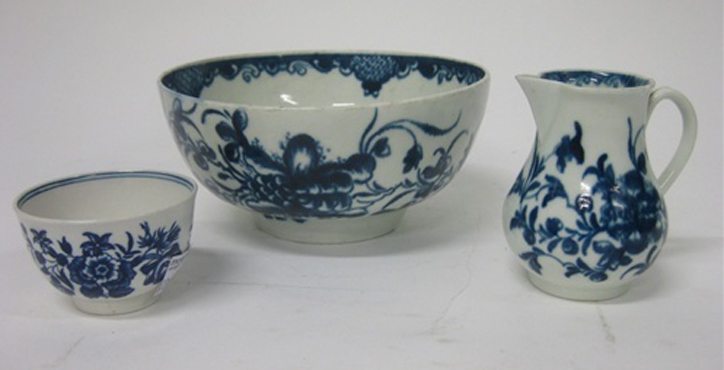 This image of three pieces of soft paste tea wares are of Dr Wall Worcester porcelain, one of them being a sparrow beaked jug of small form. Dr Wall first founded the Worcester factory in 1751 and until 1774 when he retired it came under his auspices. Early wares like these were of a soft paste variety of porcelain that were painted in underglaze blue.

Their competitors in Staffordshire had begun to produce inexpensive wares in large quantities.

Refusing to compete on those grounds the Worcester factory focused on making quality wares, producing the superb decorative objects and dinnerware wealthy patrons were looking for.

Within a short time just owning Worcester porcelain was considered a sign of your status and wealth; appealing to the aristocracy, simply because it could not be afforded by the masses.

It is made of soft paste porcelain and has cobalt blue painted underglaze decoration, with a cabbage-leaf relief moulded form and a spout in the shape of a bearded mask. 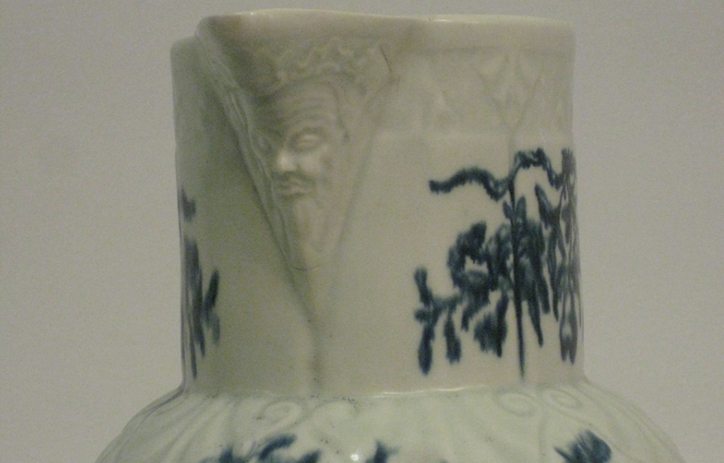 Jugs like this came into fashionable use during the 1750’s and remained desirable right through until c1800. They were known as ‘Dutch jugs’ after a format from blue and white delft manufacturing from the 17th century.

They were also made at Lowestoft, Caughley and several of the Liverpool factories. The design was copied by the Chinese for export to Europe as part of the burgeoning China trade. 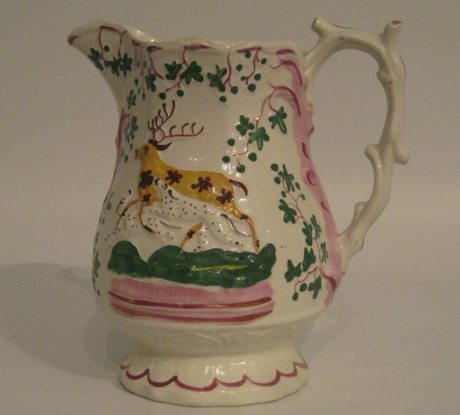 It’s hard to identify, where some jugs have been made. Like today, businesses come and go and so did lots of early factories. Records have also been lost over the centuries for many different reasons.

Jamie’s jugs do make outstanding presents for any occasion, especially at Christmas time when they can also hold the brandy sauce, the cranberry sauce, the plum sauce or, thick pouring cream for the pudding.

One of my favourites at the moment is the decorative nineteenth century European jug with deer and foliage. If you shut your eyes you can pretend they are reindeer.

The very best way to consider Jamie’s jugs is to visit Allpress Antiques or his stand at the AA&ADA Fair when it is on in the glorious Exhibition building in the Carlton Gardens.

There you will find the welcome is always warm, and the display of wares, completely inviting.