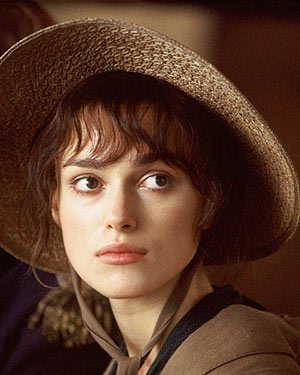 Keira Knightly in the movie of Jane Austen's Pride & Prejudice 2005

‘For what do we live, but to make sport for our neighbours, and laugh at them in our turn?‘ said eighteenth century author Jane Austen in her most talked about novel “First Impressions”, which was published as “Pride and Prejudice” in 1813.

Jane Austen’s ability to draw you into the scene so that you relate to her characters, whatever the age, was certainly one of her most creative achievements. She constantly proved in all of her novels that human frailty transcends both time, society and culture.

Jane would surely have been very tempted to enjoy a sense of pride in the record price achieved in 2010 for a copy of Pride and Prejudice.

The amount of 139,250 GBP received certainly would have allowed Mr & Mrs Darcy (10,000 a year) to live for a decade or more… and, it was not a bad result for an old book, which so many people today would hasten to tell you is going out of style. 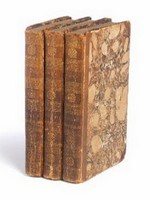 Also in March 2010, an incredibly rare presentation copy of Jane Austen’s Emma commanded £325,000 when it was sold by Jonkers Rare Books of Hart Street, Henley on Thames to a British collector.

It had the added bonus of reputedly being signed by the author to her best friend Anne Sharp.

To top it all of, The Watsons, one of the few remaining manuscripts by Jane Austen written in her own hand sold in July 2011 at Sotheby’s at London for £993,250 ($1.6m), three times the estimated price!

So did the price reflect the value of the book itself or, was it about the contents or, was it more about the fact that the actors Colin Firth and Keira Knightly in two Pride and Prejudice movies a decade apart (1995 and 2005) did more to fuel Austen-mania than the books themselves in the two centuries since they were all published?

Well the cover of the copy on sale was certainly not glamorous, or in the best of condition, so it can’t be about that. The contents, well they are universally appealing, but they can also be bought in a much cheaper version of the book?

Then it is all about its ‘collectability’, what an enthusiast will pay to have a first edition Jane Austen in their library. And, perhaps the Colin and Keira provenance factor certainly helped!

Social movements and cultural concerns will always affect the way we think. 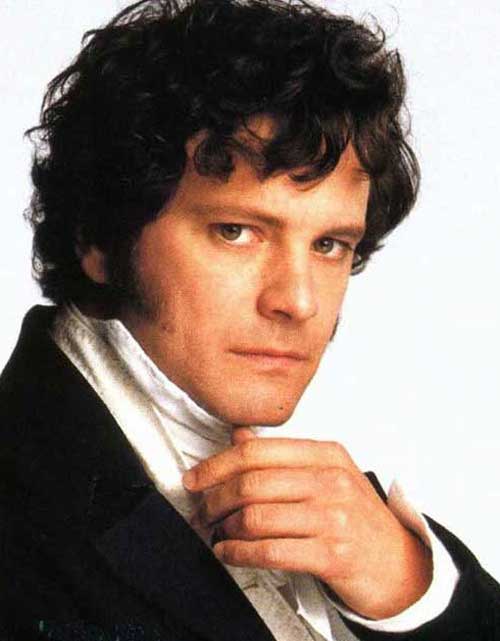 The 1995 television version of what is many people’s favourite Jane Austen Pride and Prejudice, because it had much to commend it, especially a youthful drop dead gorgeous actor Colin Firth as Mr Darcy.

The five hours they took to tell the tale allowed writers time to fully develop the characters and story line faithfully to the book, so that we all invested in the characters Jane Austen created emotionally. I much preferred this to the later edited movie 90 minute version, despite its glamorous cast.

The very celebrated nineteenth century romantic author Sir Walter Scott observed that the secret of Jane Austen’s genius was, that during a tumultuous and eventful period in England’s history, she chose to write about ‘ordinary people doing things that happen in every day life’ Image of Jane Austen discovered in 2011 by Dr Paul Byrne

Born at Steventon in Hampshire on 16th December 1775, Jane was the seventh child and second daughter of a scholar-clergyman and rector of the small country parishes of Steventon and Deane.

Her father’s education was paid for by a wealthy uncle at Oxford , where he was known as ‘the handsome proctor’. He attracted the notice of the Master of Balliol College at Oxford University’s niece Cassandra, who became Jane’s mother.

So, Jane’s family were wealthy merchant class on her father’s side and solid aristocrats on her mother’s side. This put her on a firm footing with the leisured classes, although she was not really one of them.

Her father as a church minister was regarded as a ‘gentleman’ of sorts. This allowed their participation in local events because he was welcomed by the local landed gentry. Her brother Edward was heir to his cousin Mr. Thomas Knight’s fortune. 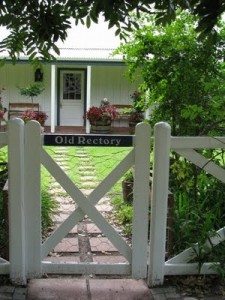 Jane lived much of her life in a country at war. Stories about hero’s and heroine’s were much needed by a people isolated on an island fearing the consequences of an invasion.

Her childhood, brought up in a country rectory was from contemporary descriptions, without pretension. Even if it was much more ‘in a homely, rather than grand manner’.

Her growing up years were by all accounts happy. Full of amateur dramatics in the barn, playing charades, literary readings and music, while her older brothers hunted and shot game her mother managed a small herd of cows and a dairy.

It seems the family fell into the category of being ‘middling people’ “I have before discovered that there was nowhere but in England the distinction of middling people’, wrote noted eighteenth century literary wit and man of letters Sir Horace Walpole on his return from the continent in 1741.

“I perceive now that there is peculiar to us middling houses; how snug they are”

‘Middling houses’ of the sort described in Jane’s novels, were lived in by the country gentry who supported the ruling and upper classes. They all cultivated an ambience of politeness, with a keen, though delicate sensibility, which was well balanced by common sense.

This was reflected in how they dressed, dined, performed and were entertained, in a selection of social settings. They strived for aesthetic perfection in their houses set in an almost equally perfect landscape urged on by their awareness of the ‘antique’, striving to emulate what was seen as the ideal –  classical perfection. 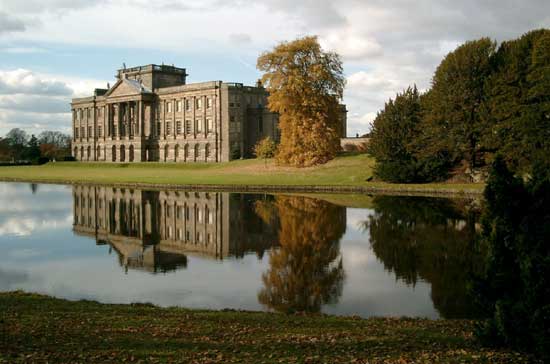 Palladian influence at Lyme Park, which overlooks that 'lake'

There was not much to find fault with the 1995 production and the producers went to a lot of trouble to find a house worthy of being Pemberley, the mythical country seat of Mr Darcy, Pride and Prejudice’s wealthy hero.

Lyme Park was an interesting choice in that it had been a sixteenth century house prior to the 1720s. 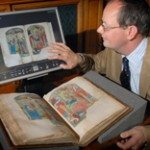 This was when Giacomo Leoni, an influential architect from Venice created an inner courtyard plan by adding a south range to the house. He called on classical precedents for its forms.

There is a well, which is disposed at the centre of the courtyard to represent the ‘font’ of all life. It had been brought from Italy in 1900.

The symbolism of the water and the well also suited the house’s ‘catholic’ owners and it’s entirely appropriate that Lyme Park has had recently returned to its library, the Lyme Caxton Missal.

It was the only completely surviving copy of a book published in 1487 by William Caxton, the first printer in England, who was supported and sponsored by Henry VIII’s mother Margaret Beaufort.

The book was printed in Paris by Guillaume Maynal and dontains the 15th century liturgy of the catholic Mass, according to the Sarum Rite, a variation developed in southern England first commissioned from the Bishop of Salisbury (ancient name Sarum) by William the Conqueror. 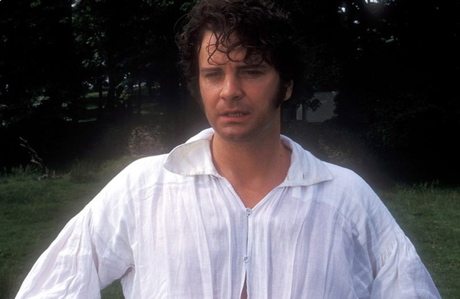 There was certainly nothing religious about Colin Firth’s wet scene in Pride and Prejudice, which was actually filmed in the pond at Lyme Regis.

It certainly caused temperatures to soar and hearts to flutter as Colin Firth, the latest ‘hottie’, portrayed Mr Darcy emerging with clothes clinging (not in the book) from the water to run smack bang into an excited Elizabeth. Who would blame her heart from falling apart faced with such a vision. She, on the other hand, treated him pretty shabbily really, so it was good to hear her ‘fess’ up.

‘It is particularly incumbent on those who never change their opinion, to be secure of judging properly at first’ said Jane whose novels continue to appeal because their stories contemporary of her own time are still relevant to ours.

There are few people whom I really love, and still fewer of whom I think well. The more I see of the world, the more am I dissatisfied with it; and every day confirms my belief of the inconsistency of all human characters, and of the little dependence that can be placed on the appearance of either merit or sense. 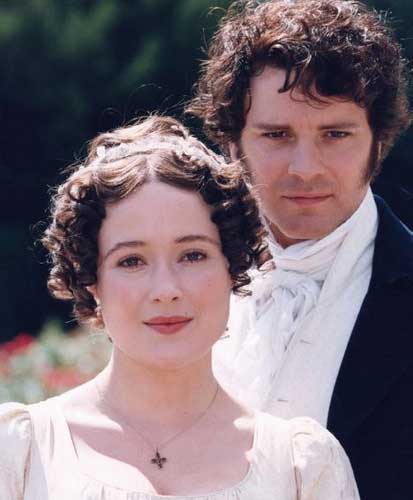 Who among us doesn’t wanted to valued above price by those we love.

Said Darcy to Elizabeth, “You shewed me how insufficient were all my pretensions to please a woman worthy of being pleased.” Hearing his confession gives us hope anyway.

In our world where we are required to embrace constant change it is not necessarily advantages of birth and inherited wealth that wins the day.

But self-examination and constantly reviewing our attitudes and behavior is helped by novels such as those by Jane Austen.

While the success of the movies encourages young readers to appreciate Jane Austen’s novels, it seems to me the older you become in both life and literature, the more you fully appreciate her very particular style of genius, discerned by first hand experience of her written word.

While today some of the customs and manners of the culture in which she lived may seem unfamiliar, its good to remember she wrote for the common reader, who would have understood them at the time.

Knowledge of the period is crucial to a fuller understanding of Jane Austen novels and ‘Jane Austen for Dummies‘ by American Austen authority Professor Joan Klingel Ray will certainly help. It was in the mid- to late nineteenth century the idea spread that one must be especially sensitive and cultured to appreciate Jane Austen, which only goes to show up our continuing pride and prejudice.

“It is very often nothing but our own vanity that deceives us.“*