The Bodleian Libraries at Oxford in England will mark this year’s World Book Day on the 1st March with a series of events dedicated to legendary British writer Jane Austen.  Also on display for the first time, and for one day only, will be a decorative cross stitch sampler worked by Jane Austen, as well as newly-discovered portrait of her. This new image has been the subject of recent research by Austen scholars, following its discovery, as England’s Daily Telegraph reported by Dr Byrne, whose Austen biography, The Real Jane Austen, is being published in 2013.

She apparently believes the new portrait may transform the author’s reputation as she appears much more feisty and formidable, a woman supremely confident in her own skin and happy to be presented as a professional woman writer and novelist. The Telegraph commented the portrait revealed Jane Austen as a ‘no-nonsense woman, one ‘who would not suffer fools gladly’. It also noted it certainly ‘flies in the face of a previous cutesy, heritage spinster point of view.’ Dr Paula Byrne herself is reported to have had a jolt of recognition as soon as she saw the image, when her husband – renowned Shakespeare scholar Prof Jonathan Bate – surprised her with it, after he bought it at auction.

“My immediate reaction was, ‘My God, it’s Jane Austen!’. “It was the nose that did it,” she said. 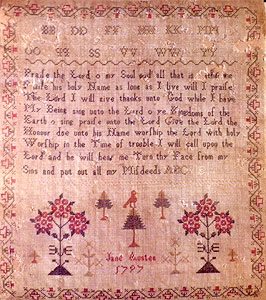 Prior to its auction last April, the portrait had been in private collection for 30 years. There are currently only two other recognized portraits of Austen – one of which was sketched by her sister Cassandra in 1810. Drawn in pencil on vellum, this portrait since it was discovered has had Austen scholars debating its authenticity furiously. It has also become the subject of a BBC 2 documentary. The Bodleian Libraries are joining into the debate by putting the portrait on display and inviting the public to decide for themselves. Both items are on loan from private collections especially for this one-day Austen display, this is a unique opportunity for lovers of Austen to see items directly linked to the writer. The sampler is signed and dated ‘Jane Austen 17[8]7’ (some of the stitching from the ‘8’ has come away), and was made when the novelist was eleven or twelve. A note attached to the back of the frame states that an early owner ‘was related to Jane Austen the novelist’ and that she ‘received it as a memento of her (n.b. Austen’s) life.’ 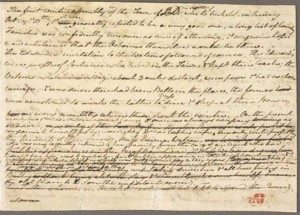 It was in her third novel Northanger Abbey that Jane referred to samplers first when Henry Tilney playfully boasts to Catherine Morland that he has read far more novels than her: ‘Consider how many years I have had the start of you. I had entered on my studies at Oxford, while you were a good little girl working your sampler at home!’ ‘Not very good I am afraid’, replies Catherine.

While we can imagine a very young Jane Austen dutifully embroidering her sampler at home, she was, by then, starting to write, and already showing the distinctive irony and literary intelligence that would characterize her great novels.

Alongside these two items will be displayed Austen books and manuscripts from the Bodleian collections. The newly-acquired hand-written manuscript of The Watsons will be accompanied by Volume the First, a manuscript of Austen’s juvenilia. Richard Ovenden, Deputy to Bodley’s Librarian, said:

‘We are grateful to Mr and Mrs Feller for lending us the sampler and to Dr Paula Byrne, the owner of the portrait. I am convinced that these two star exhibits… will raise a lot of interest from both the general public and scholarly community. ’

Jane Austen: a literary genius at work
10.00am – 4.00pm and during evening reception
Divinity School