Everyone in the audience surrendered their hearts when Australia’s smooth and creamy Jazz pianist and singer Janet Seidel and her trio of wing men David Seidel on double bass, Chuck Morgan on jazz guitar and ukulele and with special UK guest Cyril Bevan on drums, entertained the packed house Salon crowd at the Melbourne Recital Centre (MRC) royally on Saturday 22nd April, 2017 at 3pm for me, and I am sure later at 7pm for others.

It is always a special event when Janet Seidel comes to town, this time sporting a new and very flattering short haircut. She clearly enjoys the generous Melbourne crowd, who listen attentively, are always enthusiastic and very appreciative in their applause. Janet Seidel and her best boys breeze into town annually, with Australia’s first lady of jazz singing stylishly delivering as promised, a generous one and a half hours of sophisticated classy and very cool entertainment. This year she was singing in the key of that great salty 20th century American songstress, Miss Peggy Lee (1920 – 2002). The Salon styled concert at the MRC was a fine tribute by Janet, who displayed stunning vocal power while delivering sultry swing jazz with great sensitivity to the ambiance and, with a great deal of natural grace.

Talking to a number of guests after the show, not only was the concert a trip down memory lane for many, including me, it was also as far as they were concerned, the best ever! I had to agree, I wouldn’t like to miss her visits to Melbourne town, especially in the last few years as she and her marvellous men tirelessly traverse both Australian and United Kingdom regional areas, as well as major cities on demand, as they have so many ardent and loyal fans all over each country. At this concert the boys supported her smooth silkiness stylishly. They are all master musicians in their own right; David Seidel strums and bows memorably on the double bass; an elated Cyril Bevan, the trio’s special 86 year old guest UK drummer, played up a storm while Chuck Morgan proved his particular brand of genius on his extraordinary new old classic Gibson Guitar. They also added a dash of humour to proceedings, which emerges from them all having a deep knowledge of their craft. Peggy Lee was a great advocate of music of all periods. She had a rare ability to write many of her own songs, especially great lyrics despite not learning music formally. She particularly favoured songs influenced by the blues, Latin American music, songs sang in cabaret, as well as what I would call swing pop.

She wowed the crowd wherever she performed especially from the early 1940’s to the 70’s, recording right up until the early 90’s. Lee just loved ‘great songs’ no matter the source, and Janet Seidel certainly did her proud.

Janet grabbed the audience and took it on the ride of its life, articulating her words with distinction. She brought to the fore the deepest meaning of every song that she sang. As Janet so intelligently and sultrily sang the title song of the 1954 movie Johnny Guitar, Chuck Morgan’s playing on his Gibson shone with such depth of feeling, it made you want to sing out play it again…

Peppered with delicious anecdotes about Peggy Lee and her life through her breezy running commentary, Janet Seidel held the crowd in the palm of her hand throughout. Everyone enjoyed Cyril Bevan on drums. He made it a strong quartet, brilliantly ‘anchoring the sound’ one lady said to me afterwards at the Arts Centre tram stop, where I overhead her and a lady friend animated and excited while reliving they’re highlights.

Gosh, there were so many soft, tuneful and sincere songs from “Why Don’t You Do Right” Miss Lee’s first major hit in 1943 with the Benny Goodman band, to It’s a Good Day, you never really wanted the concert to end. When Janet sang the catchy Manana, we were all invited to join in. Performing Peggy’s great hit Is That All There Is ensured everyone was mesmerised, hanging on every word of the lyrics as Janet Seidel  embraced the concept of expressive minimalism with genius. I would have to say I adored her rendition, sung in a louche lounge style, one that had her conversing with the audience through the music.

There are no grandstanding effects with a song like this; just pure simple rhythm and blues of which Janet Seidel in Australia is just like Peggy Lee was in America, the master.

Janet’s ability to read the salon mood was palatable, as with great ease and tinkling on the wondrous Steinway ivories, she took us all down with her rendition of Lover and Peggy and Johnny Mercer’s great hit ‘Blues in the Night ‘.

Then there was yet another highlight, the iconic finger snapping smash hit of 1958 Fever, the song we discovered Janet’s Mamma did not like her to sing.

Sexy, sensual, steamy, silky and smooth, it’s as hot now as it ever was.

What a lovely way to burn… 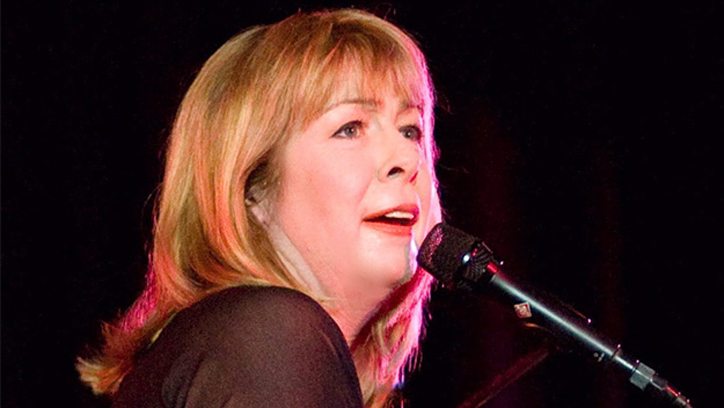 Janet told us how her father loved Peggy’s ‘train songs’ and we had a surfeit of them to enjoy. However one of the happiest brackets, well at least for me, had to be the trio of delights from the Walt Disney hit movie of 1955, Lady and the Tramp, including the title song.

Must say I saw it first this gem of a animated movie when I was 11 years of age, just old enough to catch onto most of its ‘adult’ references. It was a romantic tale of an uptown cute Cocker Spaniel named Lady, who was such a sweetie I called the first dog I ever owned after her. She fell in love with the scoundrel, the StreetSmart Downton freewheeling mutt Tramp, with the help of his Italian friends singing Bella Notte, in what is now regarded as the films most famous spaghetti and meatballs scene. The audience loved Janet’s rendition.

Then there was What a Dog or He’s a Tramp, another all time favourite of Peggy Lee’s, which Janet nailed to perfection…

He’s a tramp but I love him
Breaks a new heart, every day
He’s a tramp, they adore him
And I only hope he’ll stay that way

He’s a tramp, he’s a scoundrel
He’s a rounder, he’s a cad
He’s a tramp but I love him
Yes, and even I have got it pretty bad

All the women of my age grew up wanting a ‘scoundrel’ in their lives. Actor Harrison Ford in the Star Wars trilogy and in his other disguise, Indiana Jones, would fill the bill perfectly. Aagh, reminiscing, it’s a powerful emotion. Then there was the sort of song you sing sensually in a Smokey café – a song that emphasised the multi functional power and abilities of women who are able to do more than one thing at once.

Cause I’m a woman

I can rub and scrub till this old house
Is shinin like a dime
Feed the baby, grease the car and
Powder my face at the same time
Get all dressed up, go out and swing
Till four a.m. and then
Lay down at five, jump up at six
And start all over again The stunning program of marvellous music delivered eloquently and with inspiration by Janet Seidel in Quartet mode, was both an adventurous and happy celebration of the contradictions, exhilarations and the ironies of both being and feeling alive; a platinum event.

The time certainly flew by until suddenly we had arrived at the encores; Don’t Smoke in Bed, words for the wise, and I Love Being Here with You. They were the perfect ending for an outstanding afternoon with the Janet Seidel Quartet, who laid bare for all to see what could only be described as the extremely fine art of great entertainment.