On a cold wintery night in Melbourne town on Saturday 13th June 2015, a very cool Janet Seidel Trio with their special guest Joe Chindamo on piano and accordion, crooned more than a few tunes. They completely romanced the crowd that packed into their Sold Out performance at Dizzy’s Jazz Club in Richmond.

Warm, silky and soft, sophisticated and stylish the Janet Seidel Trio’s sentimental journey in the land of cool jazz featured a fabulous easy listening choice of memorable music, including a mixture of swinging vintage songs from around the world.

Dizzy’s Jazz Club with its rich red walls and sparkling lights features jazz musicians of world class five nights a week. The ambiance is relaxed and warm, with the food for those dining, delicious.

I was fortunate enough to be sitting with Janet’s number one fan in Victoria Kay Sharples and her guests Ken and Wendy and a great time was had by all.

Others sat at cocktail tables… “… perhaps the only place where a single man could linger without looking purposeless and alone,” the narrator of F. Scott Fitzgerald’s epochal Roaring Twenties novel, The Great Gatsby observed. After all it was the era of cocktails and retro style with Jazz, one of ‘America’s original art forms’ that spread around the world giving rise to many styles from swing to ragtime, bebop to cool jazz with its ‘long, linear melodic lines’.

From the introduction when Janet posed the question Ask Me how do I feel’, we were all soon in the groove. 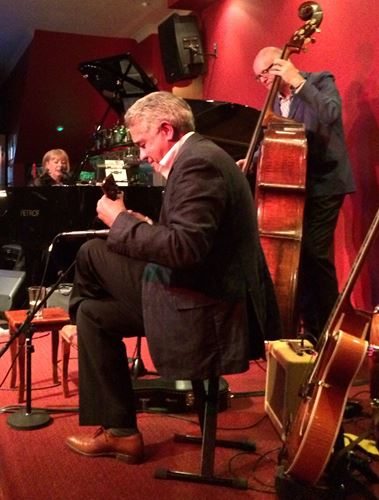 Chilling out with Chuck Morgan on electric guitar and David Seidel on Bass performing Hey John (John Lennon) and swinging out to Do I Love You, the first set was off to a great start.

Recently returned from a one-hour successful concert in Shanghai where Janet was described as ‘the singer from Australia with the perfect voice’, the Janet Seidel Trio were right on form.

Then Janet invited Jo Chindamo up on stage to support her vocals for Dance With Me and play Let’s Face the Music and Dance, with a great session of jamming it up with Chuck and Jo.

Then it was time to swing with Kiss of Fire and Them There Eyes.

Joe Chindamo has an enviable ability to both engage and disarm as he dazzled the admiring audience with not only his skilful playing, but also the brilliance of his improvisation.

Stepping into the breech at short notice when the Trio’s guest saxophonist broke his leg, there were a number of pieces Jo had not yet had a chance to get across in rehearsal with the group.

Did that phase him? Not on your life, Joe with perfect pitch, enormous energy and a wondrous ear listened to a few bars and took off, improvising and dazzling the enthusiastic audience with his genius. 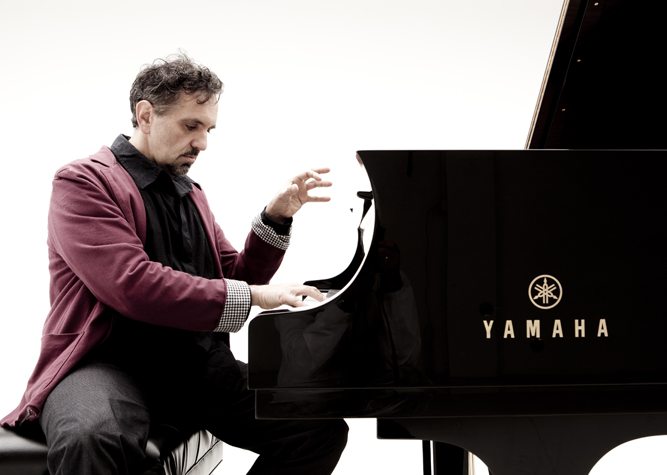 Described by violinist and Director of the Australian Chamber Orchestra Richard Tognetti as an ‘… important Australian musician who deserves wide recognition and support’, Joe Chindamo was compelling to watch, his love of music resonating from every note on the keyboard was seemingly integral to his D&A.

Stardust, Charade, Jazz and Cocktails, I’m Old Fashioned, I Wish You Love with Janet on piano and Joe on accordion producing haunting sounds of Paris where lovers meet, the whole show was captivating.

Often called the first lady of Australian jazz vocals Janet and Jo shared the piano keyboard with both inspiration and innovation showcased.

In true ‘retro style’ the mellow acoustic interplay between them all combining with Janet’s superb smooth and silky vocals meant the audience enjoyed a rare jazz club performance they will long remember. When it was time to Let’s Face the Music and Dance, to embrace Tangerine,, Take the A Train and When Lights are Low, the audience responded with great enthusiasm.

Then Janet channelled a lady many admired the perennially popular Peggy Lee. Janet’s wonderful rendition of Johnny Guitar was integral to a program that was exceedingly generous.

The jam sessions by the three men, all consummate musicians on bass, electric guitar and piano were too cool as they improvised enthusiastically. When Chuck brought out his tiny ukelele everyone wanted to reach for their Hawaiian shirt. Joyous. The finale I Love the East saw appreciative applause that brought forth the encore You Would Be So Nice to Come Home to. The show at Dizzy’s Jazz Club started right on 9pm and it was midnight when we were finally saying our goodbyes, with two generous sets from our performers with a short break for desserts and coffee in between.

Good news for fans of the special ensemble of players that we enjoyed they will be able to catch Joe Chindamo with Janet, Chuck and David, the Janet Seidel Trio again for her stunning Salon season at the Melbourne Recital Centre in October later this year.

They have also had many calls to make a new CD together… perhaps its time we all enjoy a ‘Lush Life’ to the sensational sounds of sweet jazz by Janet Seidel Trio and friends.

The tomb of Pharaoh Psusennes 1 is one of the most underrated discoveries in the scheme of things at Egypt, at least in regard to its jewellery and objects.