The Janet Seidel Trio is always on the road, gladdening hearts throughout regional areas in the countryside and in cities, not always at home down under, but in the United Kingdom where they enjoy a warm welcome as well.

Introduced to them all by our late writer Janet Walker, the Janet Seidel Trio features the lovely Janet Seidel on vocals-piano, Chuck Morgan on jazz guitar and ukulele with David Seidel getting down on Double Bass. They invited veteran British drummer Cyril Bevan to tour the UK with them in 2016 and enjoyed capacity houses at Ronnie SCOTT’s famous jazz club in London, Isle Of Wight Jazz, Dylan Thomas Theatre – Swansea, Wales and many more.

Cyril elated by his experience is coming down under to join them all on his 54th tour in Australia – at 86 years of age! During March and April, 2017 here in Australia audiences can expect an intimate night with the Janet Seidel Trio plus the UK’s Cyril Bevan as a guest on drums, wherever they are playing.

Cyril has come to Australia many times since the fifties, when he was drummer for Trinidadian pianist Winifred Atwell (1914-1983), who became a worldwide piano phenomenon playing boogie woogie and ragtime hits.

The Trio’s new Gershwin show, By George …& Ira will feature ‘rich treasures from the Gershwin Songbook’ and is performing at both the Orpheum and Avoca Cinemas in Sydney.

Warm, soft, sophisticated and smooth the Trio’s style is much admired in Australia, especially here in Melbourne where songs such as The Very Thought of You, Sentimental Journey, Windmills of your Mind and more, showcase Janet’s select silky repertoire, which includes many of jazz’s greatest classics, also available on the trio’s many CD releases. Cyril Bevan will feature in Janet’s ‘Singing in the Key of Peggy Lee’ show presented in cabaret-mode in the acoustically wonderful Salon at the Melbourne Recital Centre on 22nd April, 2017.  There will be two sessions at 3pm and 7pm. You will just have to be there, I know I will!

Jazz is a music genre that started with African Americans in New Orleans, in the late nineteenth and early twentieth centuries, springing its force from the longing of an oppressed people in the sounds of their folk music tradition. They wanted a new way to express the conflicting sounds emanating from both their heart and soul. Jazz has a fundamental rhythmic figure, which fitted into genres of predominating European conceptions with its drumming tradition expanding to fully express a uniquely African-American sensibility. From Ragtime to Blues, from New Orleans to the West Coast and beyond, Jazz hit a nerve in society on a grand scale by going global. It entered the era of Swing, with American singers with great influence. 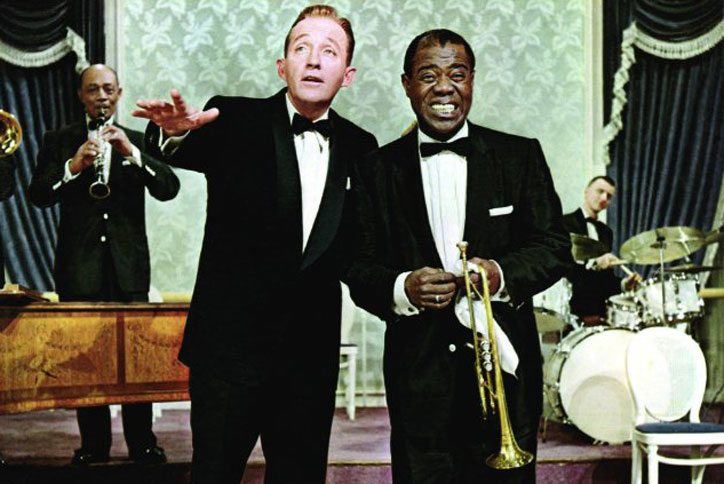 The wonderful pairing of Bing Crosby with Louis ‘Satchmo’ Armstrong moved it along and women singers such as Billie Halliday and Ella Fitzgerald helped it to become the preferred music of the so-called Jazz Age, emerging during the 1920s and dying down during the Great Depression.

Never disappearing altogether, Jazz had a revival at the end of World War II when big bands entertained the American troops in the field. Many orchestras jumped on board and the big jazz band thrived with Benny Goodman and Glen Miller leading the way, lasting throughout World War II and beyond, with Duke Ellington and his band bridging jazz and art music, transcending the bounds of swing. Successful songwriter Peggy Lee as well as my brother who played trumpet, both brought Jazz into my life, Peggy Lee with the Disney movie Lady and the Tramp for which she supplied the singing and speaking voices of four of its characters. Peg was a great ‘tramp’, bringing the easy sounds of jazz into my life.

Since the 1990s jazz has remained in play, active and alive be it underground as proved in the recent hit movie La La Land when Ryan Gosling’s character has a lifelong dream of opening his own jazz club.

Jazz offers its fans a wide range of active styles for individual performers to play, none more so than Janet Seidel here in Australia. Her voice has been ranked by critics alongside those of Peggy Lee, Doris Day, Julie London and Blossom Dearie, and has earned her the title ‘Australia’s First Lady of Jazz’, in the U.K. Penguin Guide to jazz on CD. *Songs in the Key of Peggy Lee is presented in cabaret-mode with general admission seating available at tables of two and four. Drinks may be brought into the Salon for this performance. Please note, seating in the Salon is general admission.

Future Plans from Janet Seidel: The quartet with special guest Ben Jones has been booked for the annual Newcastle Jazz Festival this year 26th August. We have been asked about tours to Queensland and South Australia and we hope to announce a tour later this year. For our UK fans, plans are afoot for a UK Spring tour 2018.