28-year-old Australian born, and now London based pianist Jayson Gillham, has won first prize at the 2014 Montreal International Musical Competition.His performance of Beethoven’s Concerto No. 4, Op. 58 in G Major with the Orchestre symphonique de Montréal under the direction of guest conductor Giancarlo Guerrero was won in ‘a flurry of trills, runs, and knuckle-busting chords’. The Montreal Gazette reported ‘Jayson Gillham earned his win with absorbing and relentless elegance’. Guerrero, who was making his Montreal debut said during the week prior…”when I hear young performers of this calibre already demonstrating so much self-assurance, musicality and passion, I have no doubt that the future of our art is in good hands… they are so incredibly talented that they make my job easy!”

Jayson Gillham has emerged as one of the finest pianists of his generation. Over the years since he left Australian shores for London after winning the Australian piano competition, he has had been justly awarded many prizes and honours for his compelling, sensitive playing. Now those present have reported that he has delivered a performance that was quite outstanding at every level to win first prize at Montreal. Supported by the Tait Memorial Trust, the critics love Jayson Gillham, offering comments such as ” fervent lyricism, magisterial and technically stunning” to their reviews. He flexes his muscles musically so well. 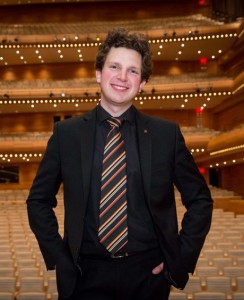 Jayson relocated to London in 2007 to pursue his Master’s degree at the Royal Academy of Music (RAM) with Christopher Elton. He won the UK’s coveted Gold Medal as the Commonwealth Musician of the Year and has performed in many London venues, including the Royal Festival Hall (soloist with the London Philharmonic Orchestra), Queen Elizabeth Hall, Purcell Room, Wigmore Hall, St. Martin-in-the-Fields, St. John’s Smith Square, King’s Place and much further afield. He has also played in New York (Steinway Hall), Virginia (USA), Hamburg, Frankfurt, Rome, Verona, Vicenza, Padua and the Scottish North Highlands.

From Germany to Edinburgh from Brighton to Tuscany in Europe many people now know his name. In Asia, Jayson has performed two Mozart concertos with the Wuhan Philharmonic Orchestra in China, and Beethoven’s Emperor Concerto with the Queensland Youth Symphony in Singapore and Kuala Lumpur. Recently he returned home to play with the Medici Concerts in Brisbane and the Melbourne Symphony to much acclaim. His parents at Dalby in Queensland, must be feeling very proud right now. Well done Jayson, continue to go and play well.