Jean Baptiste Lully (1631 – 1687) is a renowned French composer of the style of music we now know as Baroque.

The term Baroque was originally used in the nineteenth century in a derogatory manner, having derived from various Hispanic words denoting ‘a mis-shapen pearl’.

However, the connotation of something inherently beautiful, which can also be viewed as bizarre or extreme, is certainly appropriate for music composed in this style.

Encompassing a diverse range of genres and styles across almost two centuries, it can be difficult to identify what is at the essence of Baroque style music, other than great joy.

At the centre of its essence in France Jean Baptiste Lully was a formidable force. From 1672 onward he was in complete control of the musical life at the French court of Louis XIV (1638 – 1715), the Sun King.

No one could produce any music or theatre without his written permission. There were serious repercussions if you did.

Thankfully Lully was far from being a talentless opportunist and he left a legacy of style and devotion to detail that is at the foundation of the traditions in French music, particularly opera.

King Louis XIV was a great exponent and lover of dance. He requested that Lully include dance sequences in all his opera compositions. 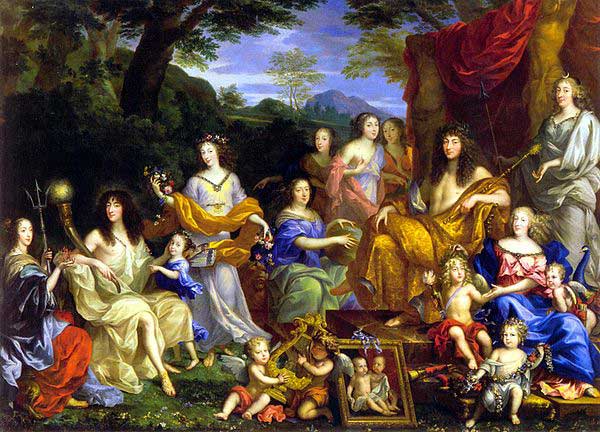 King Louis XIV, the Sun King, surrounded by his family

Louis appeared in many of the royal court ballet performances himself over an eighteen year period. His most memorable was dancing the role of the ancient Greek God Apollo.

Lully transformed the standard and practices of the orchestra, composed sacred music, and crowned his King’s glory by creating the Tragedies Lyriques.

He collaborated with Louis XIV’s favourite actor and writer Jean Baptiste Poquelin, mostly known as Molière, to produce a famous succession of comedy-ballets, of which Le Bourgeois Gentilhomme (1670) is probably the best known.

This was an age when bold harmonic forms combined with effortless elegance and composers produced music that was all at once, delicate, poetic and decorative, meant to charm, entertain, and move without tears and violent passions, plunging the very depths of the spirit and soul. I must admit whenever I hear Lully’s Marche pour le Cérémonie turque from Le Bourgeois Gentilhomme I want to leap to my feet and dance.

During the seventeenth century Europe was ennobled by support for the expansion of world exploration and the birth of the sciences.

At the court of Louis XIV in France the addition of drama and dance was part of the impetus for change. What can only be described as a period of feverish musical activity began.

From the archiepiscopal city of Salzburg to the imperial court at Vienna, from the northern reformers to the English eccentrics and American colonists, the western world went mad for music. Composers at this time, including Lully displayed great creativity, combining brilliantly philosophical thought and musical aesthetics to render and translate into music the passions, preferences and affections of contemporary man.

Nobility and foreign royalty alike coveted the fame and reputation of Louis XIV at Versailles. Germany, Austria, the Low Countries, Poland, Hungary and Scandinavia, although on a smaller scale, tried to replicate his taste in all things.

Music united all this virtuoso era produced with splendour and mechanical ingenuity.

Great sacred and secular works were produced and many consider the operas and musical performances of this period have never been surpassed.

Musical gestures were filled with pathos; musical melody exploited by the human voice in powerful performances of sensuous beauty and soaring vitality.

The soul of this era is consummated in its marvelous music. It reveals all by its purity and reflects all that was good about life, especially an awakening love of nature, and it swept all before it.

The Chevalier wanted Lully to help his niece, a princess of the blood Anne Marie Louise d’Orléans Mademoiselle de Montpensier, to learn to speak Italian. 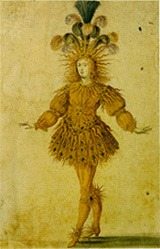 Lully always claimed to be the son of Lorenzo de’ Lully, a Florentine Gentleman.  However, according to scholars, it is more likely his origins were humble and that he learned to play the violin from a monk who made shoes.

Roger de Lorraine, the Chevalier de Guise took him from his native Florence to France when he was about ten or eleven years of age. It is also likely the Chevalier recognized that the boy had a precocious talent and wanted to help him. With the assistance of the ‘Grand Mademoiselle‘ his study of the theory of music increased and so did his opportunities.

He was placed in the Mademoiselle’s private orchestra and his playing of the viol elevated his standing in the household. He did however suffer a setback when he was reputedly dismissed for having composed a satirical air at the expense of Mademoiselle.

By this time the young King Louis XIV had him well in his sights. He was introduced at court where he and the King danced together in the 1653 production of the Ballet de la Nuit.

Jean Baptiste Lully was appointed Compositeur de la Musique instrumentale de la chamber within a very short time and his friendship with the young Sun King was set in stone for his lifetime. This was the starting-point for his meteoric rise to fame and power in the world of French music, including being given his own orchestra in 1656. 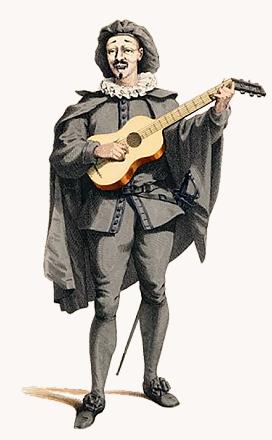 By May 1661 he was Surintendant de la Musique de la Cambre.

In his early works Lully exploited comedic elements and a production of the ballet de cour was completely in the tradition of the Italian Commedia dell’arte (mime with masks, of Italian origin).

The Italian Tiberio Fiorilli was in Paris with his troupe of actors in 1660.

He had developed an enigmatic character, Scaramouche whose many guises and disguises, combined with bluster, buffoonery and pathos, were a great magnet for Lully and his music. He was drawn to play the role of Scaramouche in the Ballet de l’Amour Malade and in the Ballet interludes to Xerxes, for which he composed the stunning music.

Lully affirmed many times over that the French language was not proper for large scale opera, which like his contemporaries he believed was always best sung in Italian.

He did however satisfy the public with what they really wanted: continuous and joyous music with dramatic words sung in French. 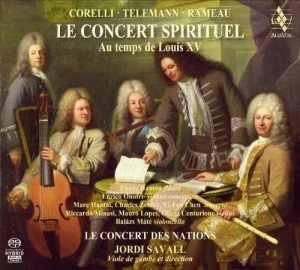 It is the circumstances of Lully’s death that are the most notorious.

While conducting a performance of his Te Deum, he accidentally struck himself on the foot with the large staff he used to pound the floor to keep time. He contracted gangrene, which led to blood poisoning and his eventual death on 22 March 1687.

Jean Baptiste Lully’s legacy is kept alive through his music.

The Aradia Ensemble, a Canadian company has recorded much of his music. As has Spanish Catalan viol player, conductor, and composer Jordi Savall and at the Palace of Versailles.