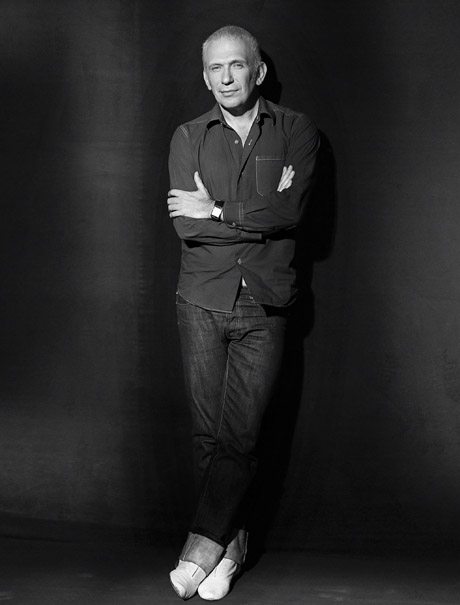 There is much more to bon vivant Parisian born creative and couturier Jean Paul Gaultier the man than meets the eye.

For those used to thinking fashion as being only about fun and frivolity, he stands in direct contrast, because in so many ways he is about so much more.

Jean Paul Gaultier is an artisan creator, one safeguarded, supported and well respected for both his erudition and imagination.

He’s one of those rare guides in our world today who is taking us on a journey, one that will eventually far exceed our expectations as well as our current sense of ‘culture’. It is a world in which all our senses will be brought into play as outmoded ideas are left behind.

Tony Ellwood, Director, National Gallery Victoria, where his exhibition The Fashion World of Jean Paul Gaultier – From the Sidewalk to the Catwalk is on show noted “Jean Paul Gaultier’s radical designs break down stereotypes and clichés, questioning preconceived standards of beauty and challenging societal, gender and aesthetic ‘norms’… a world that extends beyond the catwalk into the realms of art, music and film” he said.

Fashion for Monsieur Gaultier is not only integral to his life’s journey but also the most important aspect of his personal philosophy about living his life as, and through art. An animated Jean Paul Gaultier in conversation with Thierry-Maxime Loriot, on stage at the NGV, October 2014, photo: Jo Bayley, The Culture Concept Circle

A deep thinker on many levels, intellectually, spiritually and philosophically, it became obvious to me while listening to him speak to the gathered hushed audience at the NGV so eloquently, that he has strong values and humanist ideals.

These are deeply embedded in his vision for what life was, what life is and what life can be.

He clearly demonstrated he is a true leader; courteous, giving, interested, someone who offers new options, other ways of doing things, and importantly empowers others to transform right along with him.

Proof was provided by the presence of Nathalie Bondil, who had flown in from the Montreal Museum of Fine Arts (MMFA) being Chief Curator of the original exhibition that took place in 2011, organised around seven themes . These trace the ‘influences, passions and obsessions of Jean Paul Gaultier from the streets of Paris to the world beyond’ revealing both his energy and considerable creative abilities.

Taking to the stage at the NGV, Ms Bondil charmed, captivated and gave us a realistic and flattering portrait of a man she so clearly admires. She talked with real warmth, wit, charm and with great clarity about the unique, unrivaled designer she has worked with, as have his muses Australian and otherwise, those people who have helped realize his vision. She offered a unique insight into the production and staging of what is a truly dynamic display, one which brings audio-visual elements into play through talking models.

Jolicoeur International, one of Canada’s leading designers and manufacturers of display materials, created the animated mannequins presented in innovative pose. Their various skin tones reflect the various ethnicities of Gaultier’s runway models while the accessories, sketches, stage costumes, excerpts and footage from films, runway shows, concerts and dance performances form an important aspect of the whole.

While he is able to talk effusively, eloquently and effectively with great enthusiasm, Monsieur Gaultier importantly also listens. He has a strong sense of occasion and understands why conventions do exist, respecting his hosts, his audience, the media and his collaborators. 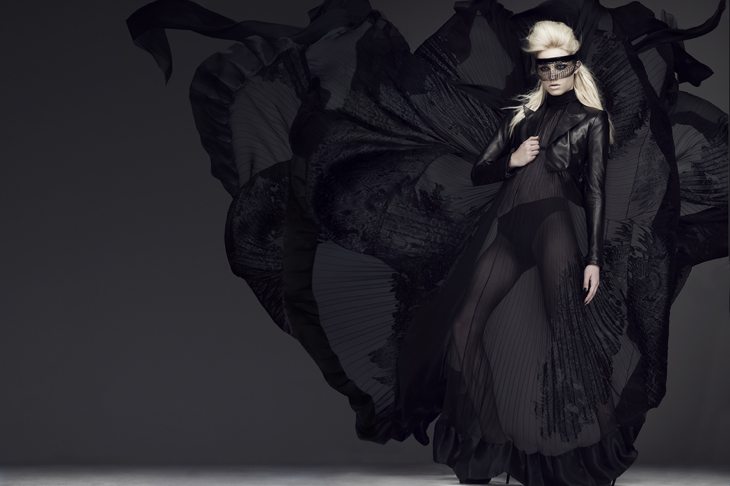 Holding an an extensive, effusive, all encompassing conversation on stage at Melbourne in the Great Hall of the National Gallery of Victoria with curator Thierry – Maxime Loriot, designer Jean Paul Gaultier certainly came into his own.

He grabbed the microphone as soon as he arrived and from then on successfully commanded the stage and audience, proving he’s the master of his own destiny.

The tradition of honouring and respecting others socially, or culturally, is a matter of good form and it became clear over the nearly hour he talked to the audience, and with curator Thierry – Maxime Loriot, that he has a system of values and principles for guidance, especially in practical affairs.

Values and having the courage of our convictions are both concepts we all must think about and come to terms with at some stage during our personal and professional development.

Individuals and groups are important components of current change, especially if and when they work together to constitute the whole. Since this exhibition was first realized in 2011 in Montreal at Canada, the chosen team working with curator Thierry – Maxime Loriot have helped expand Jean Paul Gaultier’s excellent reputation as an artist, as well as showcase his true genius.

Loriot certainly proved a point about working as a group by relating how the show has grown continually under Mr Gaultier’s vision and direction. It changes to suit each place and time with Jean Paul Gaultier arriving on site to empower and embolden each new team in their endeavours.

Once the show lands in each country it can’t help but take on nuances of atmosphere, local influences and colour. This ensures the exhibition’s growth is an evolutionary process.

This in itself is a ‘French revolution’; a rare event for those involved as each individual contributes to its cultural growth, reach and purpose.

At the preview Mr Gaultier and Mr Loriot both remarked how unique and special the Melbourne connection is and gave us examples.

Melbourne was once a part of Terre Napoleon before it became part of Victoria, so the French connection is a strong one. Working in collaboration the Gaultier team and the team at the NGV in Melbourne, director Tony Ellwood and his team have helped to produce what is a very special landmark Spring and Summer show for Victoria, one sure to attract active tourism.

Jean Paul Gaultier has strong ties to Australia through some of its great performing artists; Nicole Kidman, Cate Blanchett and Kylie Minogue, as well as many Australian models.

None are perhaps more famous right now than Andreja Pejiéc, whose success in transforming herself through gender with Monsieur Gaultier and her families support, means a great advance in social justice for many others.

Gaultier revealed  he also empathizes greatly with the world of director, screenwriter and producer Baz Luhrmann and costume designer Catherine Martin. The films Strictly Ballroom and Moulin Rouge as he explained to the anticipating audience, seemingly had a major impact on his life and designs.

Costume, with the influence of fashion, fulfills many of our aesthetic dreams.

It allows each and every one of us to contemplate on how we creatively communicate, while also giving us a medium through which we can understand how to embrace life and change. Since the sixteenth century when the importance of personal and social dynamism became part of the cultural equation, humanism’s ideas have promoted the idea that if we have faith in self we will ultimately gain personal freedoms.

This has become an important cultural concept, motivated by that period in history when great art became a vehicle for self-discovery.

This show will inspire change in attitudes, one that when combined with other factors will be all about us reinforcing our belief in the advancement of humanity by its own efforts; embracing change as an integral aspect of our lives.

Jean Paul Gaultier’s enthralling museum experience is taking Melbourne by storm, revealing all of that and much more.

On stage at the NGV he revealed a great deal, including that he is ‘streetsmart’.

We discovered Jean Paul Gaultier is a man entirely comfortable in his own skin. His security is brought about by the process of giving so much of himself to others without seeking anything in return.

He is actively helping to change the world to a place in which we all regard and respect each other’s choices. Those who surround him and support him recognise and respect his opinions.

At the age of 62, Jean Paul Gaultier has reached a pinnacle in life where wisdom is an important part of his equation.

He has taken inspiration where and when it was given to him, shaping and moulding it and his own unpretentious character, as he moves inexorably forward. Gaultier is a true leader not only in the world of fashion, but in corporate life and in society. He is not an elitist, but truly one of the elite. 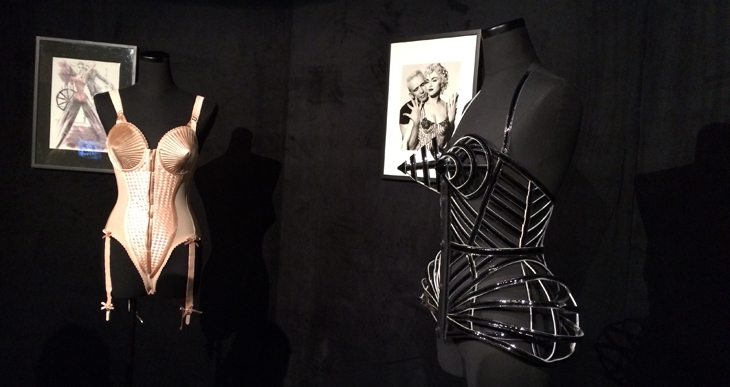 Cone Corsets, The Fashion World of Jean Paul Gaultier: From the Sidewalk to the Catwalk at the National Gallery Victoria, October 17 – February 8, 2015, photo Carolyn McDowall, The Culture Concept Circle

Gaultier continues to grow and is both enlightened and strengthened by his mistakes, successes and experiences. He was for me and will always remain now that I have had an encounter of the very best kind, the very epitome of what historians describe as a true Renaissance man; one whose thirst for knowledge is only quenched by his desire for more.

Born in 1952 in a suburb of Paris, he attributes his granny with introducing the world of fashion to Jean Paul Gaultier the child. What a service she has done. Wherever he travels today those around him prosper, economies thrive and many people are inspired. She would be so proud of him, of that we can be sure.

Jean Paul Gaultier does not have boundaries; nor does not limit his imagination.

He knows that each event should have at its core its philosophy, point and purpose. It also needs to have a long-term view and to give an excellent experience to those participating. Moody art lighting, sleek chic mannequins sheathed in sexy, clever garments for men and women and sometimes both in one, suit the theatrical universe at the NGV they are inhabiting albeit for a short time.

Jean Paul Gaultier, Chevalier of the Order of the Legion of Honor in France, is an important part of an enlightened majority, one animating the spirit of our age. He’s a man whose individual character and creativity, helping to spur us all on to great actions and achievements. Give yourself and your friends and family a treat, enjoy an outing to the show. The Fashion World of Jean Paul Gaultier, with the designer standing among others in a dramatic display of ‘talking’ mannequins at the National Gallery Victoria, October 2014, photo: Carolyn McDowall, The Culture Concept Circle

The Fashion World of Jean Paul Gaultier – From the Sidewalk to the Catwalk will help us all to connect ideas and initiatives through the arts to = outcomes as he moves forward, helping us all achieve at the pinnacle of the art of what is possible.