Jenny Eriksson of The Marais Project

In wedding terms ours is a Crystal Anniversary: more distinguished than Wood (5) and Tin (10) but still many years from receiving a letter from the Queen or even the Governor General.  I appreciate the opportunity of sharing my thoughts on the last decade and a half.

Where have we come from?

The origin of The Marais Project was my career frustrations back in 2000.

As non-orchestral, non-mainstream instrumentalists, viol performers have no formal career structure. Inspired by pianist Gerard Willems, who at the time was completing his landmark recording of the complete Beethoven piano sonatas, I came up with the idea of performing all of the works of French composer Marin Marais (1626-1728) as a major goal.

The The Marais Project’s first concert took place in July 2000 at St Scholastica’s Chapel, Glebe, Sydney.  Marin Marais was the only composer featured.

Very quickly I realised that there was no future in doing concert after concert of Marais so we had to “mix it up” with other repertoire, a philosophy we have continued over the years. We approached this in several ways.

Firstly, by expanding from Marais into French Baroque music in general.  To my immense joy I have discovered many French gems such as cantatas with obbligato viola da gamba, rarely heard chamber music and even folk songs. More recently we started performing and recording some of the songs of Edith Piaf.

Secondly, I asked Australian composers to write for us.  Finally, we made the important decision to extend ourselves “sideways” rather than “upwards” as we established ourselves.

It is worth explaining this concept a little further.

In conventional classical music terms, as an ensemble becomes better known it typically (but not universally) moves up the artistic chain.  That is, they invite high profile, established artists to appear with or compose for them.

With no funding for overseas or even interstate airfares and hotels we made the decision to expand horizontally into other genres.

I sought out top class jazz and world music artists, composers, actors and others.  All were Sydney-based; each brought amazing skills and talents.

This is not to say our approach is right or to criticise other approaches but it was one way we used to turn a constraint into creative outcomes.

Our primary focus was, and still is, on Marais and the French Baroque, but we have been enriched along the way through acting as an open rather than a closed project.

What has changed in the past 15 years? The number and quality of viol players in this country has steadily increased.

It’s exciting to have chamber music colleagues of the caliber of Josie and the Emeralds, Latitude 47, the Badinerie Players, Ironwood, Ludivico’s Band, Danny Yeadon and many more bringing the viol family before the public in creative, innovative and often fun ways.

It is fair to say that audience acceptance and interest in early music as a genre has also risen, as has the competence of early musicians.

Many of the latter have “portfolio” careers, also playing modern instruments and crossing over into other genres as did their renaissance and baroque forebears.

What has changed for the worse?

Formal music criticism and arts journalism – along with print media in general – is in decline in this country.

I don’t see this turning around. On stage... the real joy of it all

I am very comfortable with some aspects of social media including the rise of the “amateur” on-line critic (there are good and bad examples of these folk), but increasingly, if you want a good background article or even a review of your work you have to write it yourself or at the very least, organise it all. Magic early music in a salon ...intimate and exciting

This pushes arts marketing to more and more extreme claims of “unique” and “moving”.

In parallel we’ve seen the emergence of the gorgeously made up, soft focus publicity photo (female) and the bare-chested “six pack” shot (male).

The Marais Project has at times been as guilty of marketing crimes as any other ensemble! (I should say, however, that no male Marais Project performer has volunteered for the “six pack” shot yet.)

I also have concerns about the state of music education and music literacy amongst young people.  For more than 25 years I have been part of the Musica Viva in Schools program, performing specially arranged baroque operas in infants and primary schools.

I still give up to 80 concerts per year in schools.

Lovers of classical music need to know that many schools have virtually NO music education at all or rotate a term of music with terms of drama, gymnastics and other art forms so music skills are quickly lost. 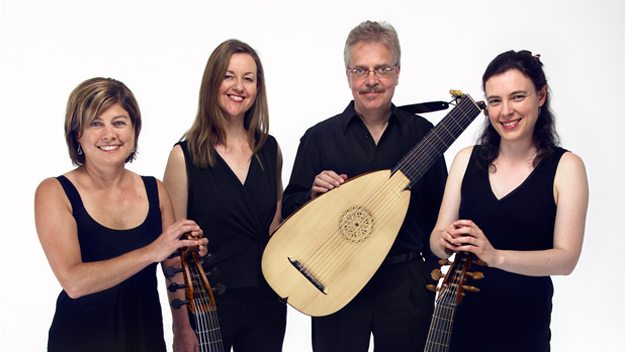 Students can sit for Year 12 music without being able to read any form of notation other than a chord chart.  This situation will have a lasting effect on classical music audiences.

If viol music, early music and classical music are to have a long term future we need to seek ways to engage the young on their terms. Jenny and Tommie in rehearsal

A colleague recently told me the story of the board of a well known classical music organisation that was lamenting the fact that so few people under 55 attended their events.

He suggested holding a competition where they invited young video artists to attend their concerts and rehearsals and make short videos that would be used for promotion.

The Board’s response?  They were worried about controlling the quality of what these young people produced and the effect on the organisation’s brand.

They did not proceed.  How sad.

Any teacher will tell you that if you want a young person to be interested in something outside of their immediate experience the trick is to give them a worthwhile job to do: write a review, make a video, interview a performer.

This in not a matter of the old or young being more or less important.

It’s simply about ensuring we are thinking about tomorrow’s audience today.

On a positive note, last year Stringendo magazine, the journal of the Australian String Teacher’s Association, published an issue where all the reviews of music and CDs was done by string students in high school. Our “Lady Sings the Viol” CD was reviewed by a 16 year old student who showed wonderful insight into what we were trying to do.

We follow our own advice in regard to engaging the young.

The Marais Project premiered a piece by composer and gambist Alice Chance when she was still at school and have commissioned a further work from her for 2014.  The young person who does all of our promotion and You Tube videos started with us aged 20.

Susie Bishop and Emily-Rose Šárkova who will appear in our second concert have not yet turned 30.

Our final concert this year will premiere a new piece for electric gamba and bass guitar by 21 year old Siebe Pogson who will also perform with us.  We give few explicit instructions to these fabulous young people but let them follow their own direction.  I’ve not yet been let down!

I’ve commissioned jazz artists Matt McMahon and Siebe Pogson to write works for the Ruby gamba for our October concert and Matt is also arranging a couple of Australian jazz charts including a ballad by virtuoso Australian electric bassist, Steve Hunter. In closing, I would like to acknowledge the many fine musicians who have worked with The Marais Project. They are too numerous to name individually.

Thanks also to the ABC, Fine Music 102.5, the NSW Early Music Association and, the Australian Viola da Gamba Society and its members.

Music is a collective activity: we cannot do anything of substance alone.

Giving a poignant and ethereal performance, Rose reports for The Culture Concept Circle, the Australian Haydn Ensemble’s recital in Sydney recently was sublime.