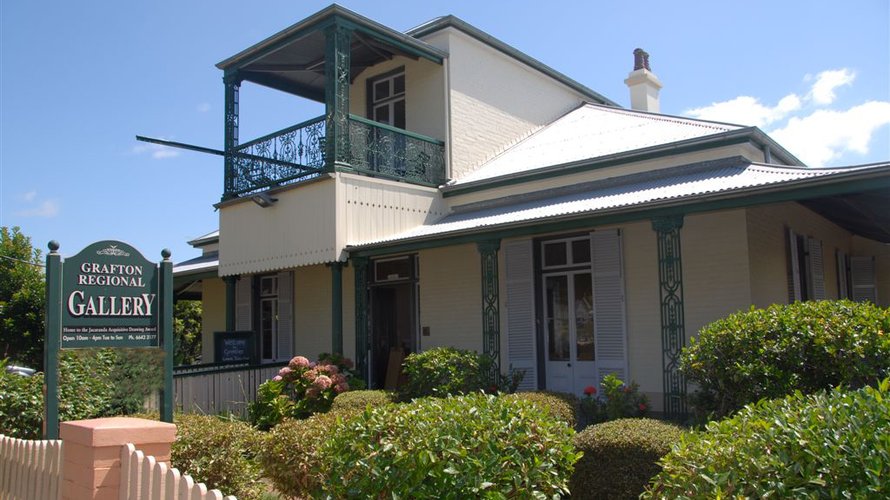 The Clarence Valley area is in the Northern Rivers region of New South Wales and the indigenous peoples the Bundjalung, Gumbaynggirr and Yaegl are the traditional owners of the land. Grafton, within this Valley, sits on the banks of the grand Clarence River, the largest waterway on the east coast of Australia. It is a city of tree-lined streets and early colonial buildings featuring Victorian and Edwardian style architecture.

Grafton Regional Gallery is an outstanding public space reflecting the passion for the visual arts held by the community.  It is the artistic hub of the district and housed in the restored Prentice House circa 1880, which holds the largest collection of artworks on the North Coast of New South Wales and continues to develop its vibrant collections.

The Gallery presents over forty exhibitions and fifty programs each year including the richest drawing award in regional Australia. Distinct exhibition spaces enclose a large shady and restful courtyard. 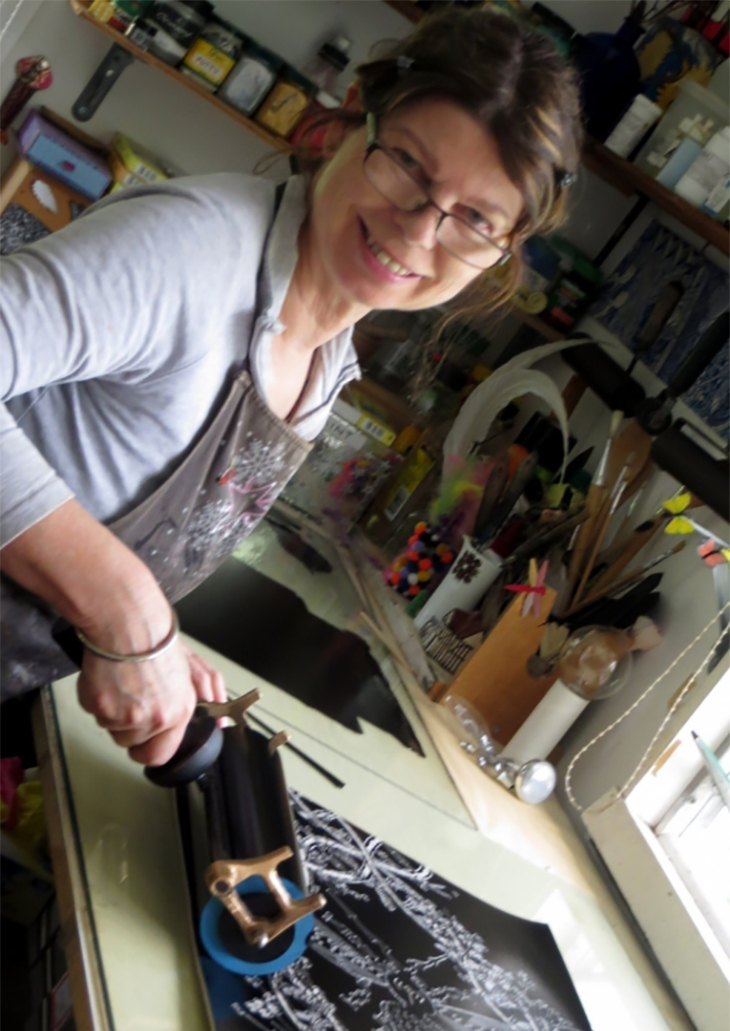 The exhibition Pollinate by Artist printmaker Jenny Kitchener. continues to explore her preoccupation with pollination but this time with the focus on bird pollinators. The artworks acknowledge and highlight the important function birds and bees perform in servicing the reproductive needs of plants. The striking and skilfull works explore this fascinating interest through linocuts, monotypes, collage and paper cut outs. While observing this vista of visual responses the viewer is simultaneously immersed in bird song playing in the background adding authenticity by recreating the ambience of the bush.

Jenny Kitchener’s playground as a child was Sydney’s bushland fringe. Today her home is a rural property located in the sub-tropical Northern Rivers area of New South Wales. Here birdsong and the hum of insects provide the perfect soundtrack for creating her art. 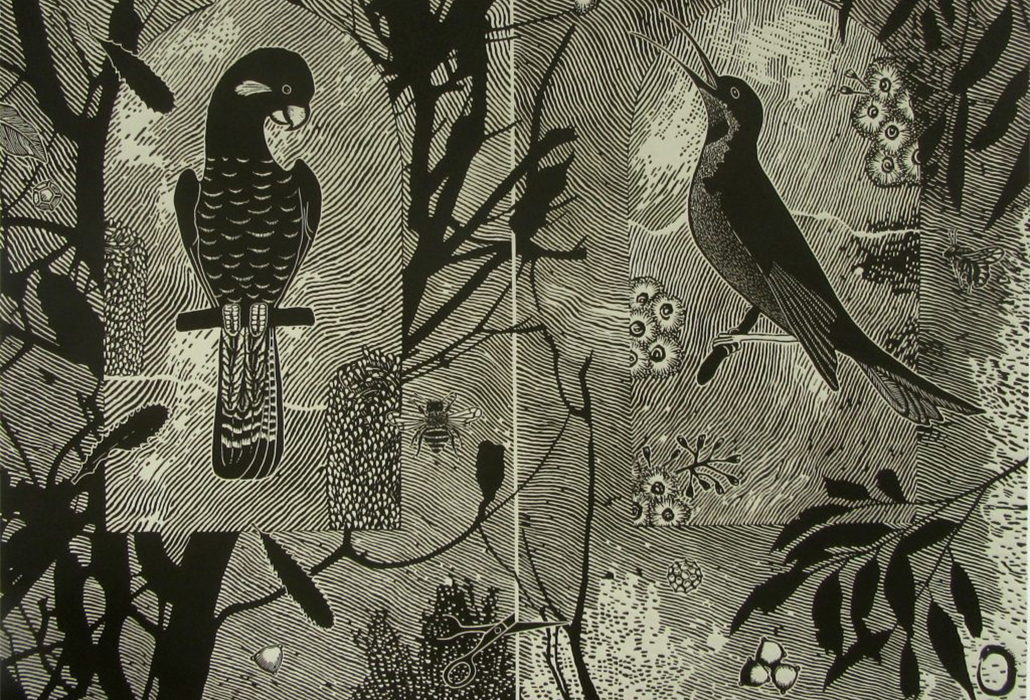 Pollinate is the eleventh solo exhibition by this highly acclaimed award winning Australian artist and printmaker. The National Gallery of Australia, the State Library of Queensland and numerous other public collections hold examples of her work.

I was particularly drawn to the three monotype works Bird Song, Here and there and Bush Whispers. These works were beautifully conceived and tenderly executed. 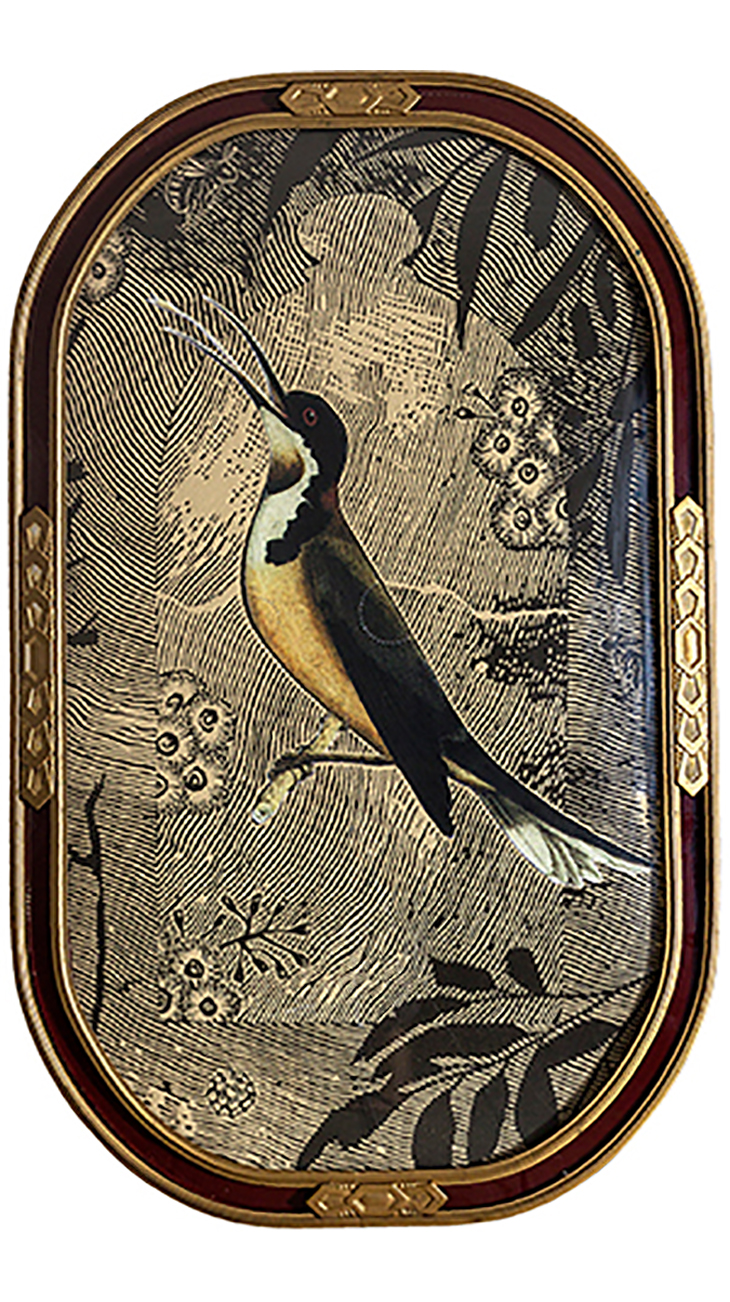 In Bird Song the oval shaped work is framed on white backing intensifying the white within the design. The semi-circle tilted on its side and small white oval are carefully positioned to balance this captivating work.

The songs of birds are notated in the white markings that navigate the surface. Sounds echo, ricochet, reverberate, communicate and linger across the landscape of the artwork. A loose grid captures the length of the sounds as they journey across the plane.

Leaves and feathers tumble and are suspended in moments of enthrallment and discovery. The topography of this aural scene is punctuated by these visual expressions. This lyrical scene is musical in intent with its rippling rhythm entrancing the viewer. 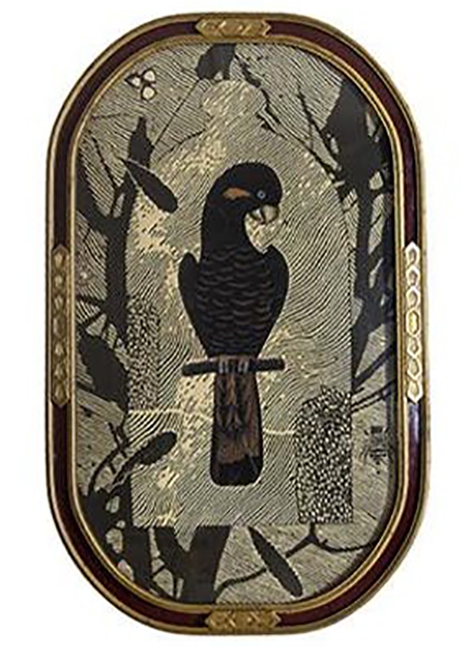 Here and there is a five panelled monotype where the flights of observation and fantasy collide with a delicate simplicity. The fragility of nature is exquisitely fashioned in the free falling leaves and feathers, fragments of nature poised in time and place.

The scrapings, scrawls and hieroglyphs of meandering white lines are the manifestations of animal tracks. Nature’s notes dance, dart, skim and flutter in a downwards spiral and gesture gentle fluidity.

The open beaks squawk and call whilst the closed beaked birds are ever watchful, alert to the dangers and sounds of their environment.

Suspended animation is integrated in the playful puddles of red, black, white, blue and orange scattered in a pattern of diminishing drops.

There is a spirited yet ordered simplicity about this deftly and perceptively constructed artwork. The varied shades of grey in the background are the perfect foil for the lines and forms of the work, reminiscent of Joan Miro who articulates “I try to apply colours like words that shape poems, like notes that shape music.” 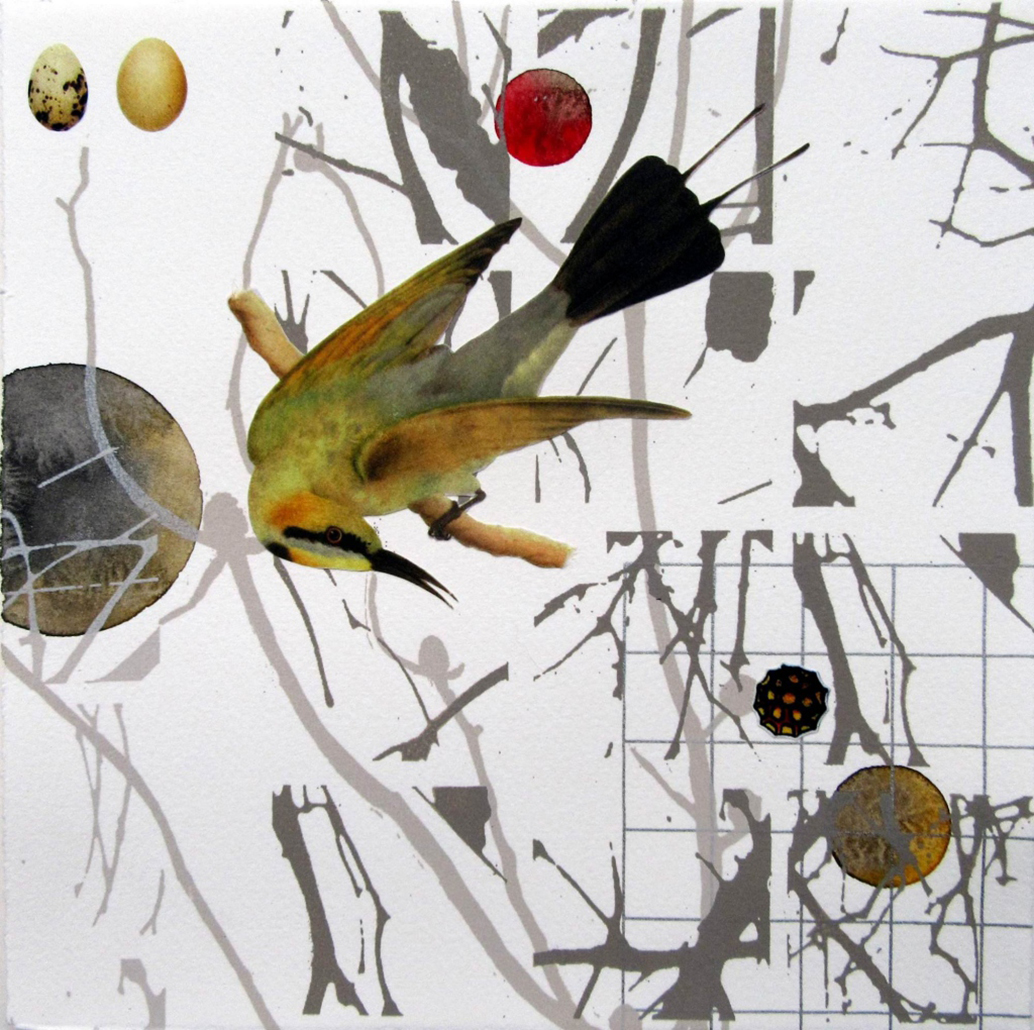 No birdsong rather the rustle of leaves, the crunch of insects, the invisible sound of feathers falling, the scraping and scratching of animals on vegetation and in soil appears in the three panel monotype, Bush whispers.

The wind flutters through ferns and filters the air composing harmonies that resonate across the surface of the work. The mellow notes of nature nourish and signal a peaceful tranquillity. The circles are continuous rounds of sound, softly murmuring and spinning in the breeze.

Jenny Kitchener has yielded her own distinctive style in Buzz a linocut where the added watercolour emphasizes the bee and the power of pollination. The bee is integral in the cycle of plant reproduction.

As a pollinator the bee collects nectar and pollen from flowers and as she visits other flowers some of the pollen is rubbed off onto the stigma and as a result fertilization occurs. 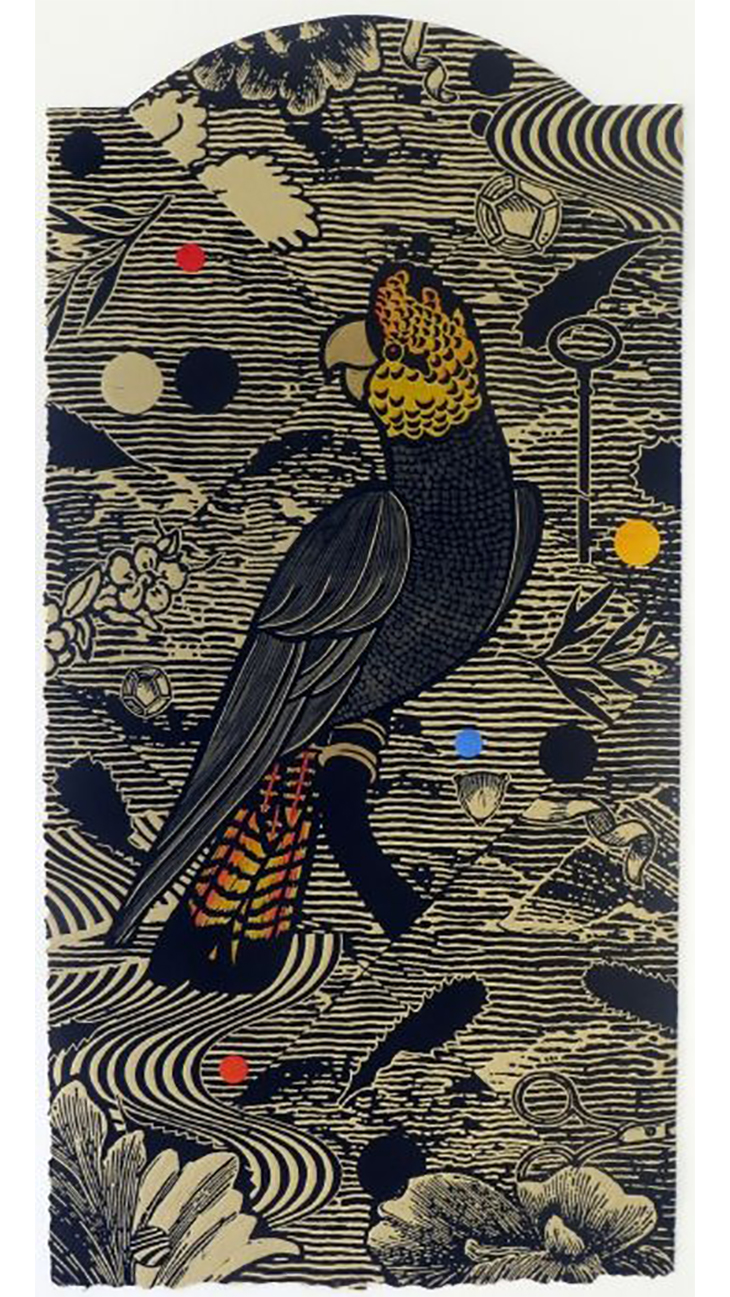 This phenomenon is wondrously and graphically explored in an artwork similar in style to the iconic linocuts of Margaret Preston. The shapes and lines of flowers are interwoven swaying in anticipation of the continuity of the precious species. The wavy sky lines are a backdrop for the atom like pollen grains dusting the atmosphere.

The bee’s travel paths are pristine and purposeful like the well-worn tracks of cattle hoofmarks across rolling hills.

In Family: Psittacidae and Family: Meliphagidae I have framed each bird ‘family’ in an elaborate portrait-style frame, in much the same way as we lovingly frame photographs of our own family members.

In so doing, I hope to elevate the bird families’ status in our own eyes, engender respect for nature and highlight the valuable work these wonderful creatures do in their role as pollinators”, expresses Jenny Kitchener. 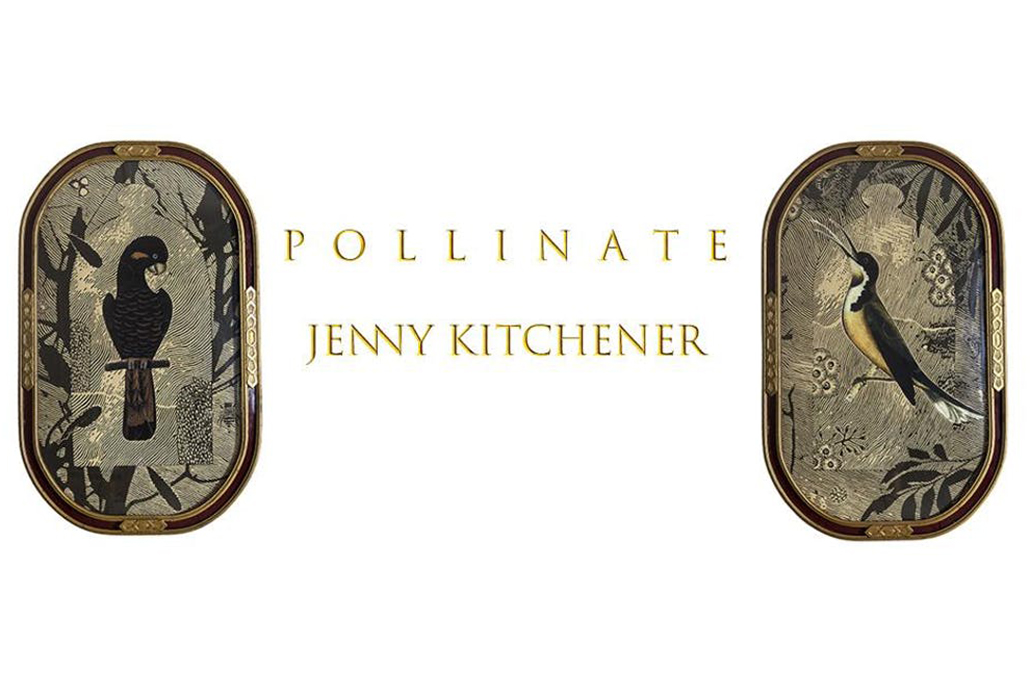 A description of the manufacture of porcelain in 1713 by French Jesuit priest Father D’Entrecolles, a resident in Peking, relates the firing of blue and white porcelain ‘A beautiful blue colour appears on the porcelain after having been lost for some time. When the colour is first painted on, it…