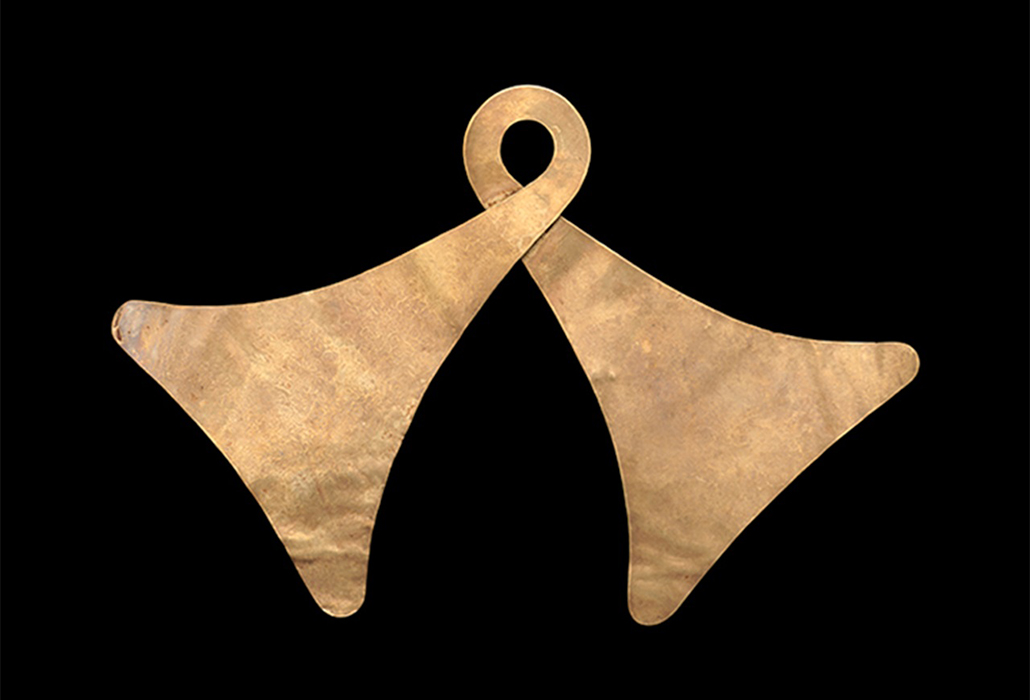 A belief in the effect of gold and gemstones on the affairs of many was not limited to an age or culture, but seems to have been part of every human society recorded. Over the centuries the production of jewelry and accessories for human adornment has helped to shape both creativity and imagination.

This is evidenced by a stunning 19th to early 20th century Gold pendant from the Indonesian Island of Sumba, which stylistically simple, could be said to be ‘modern’. 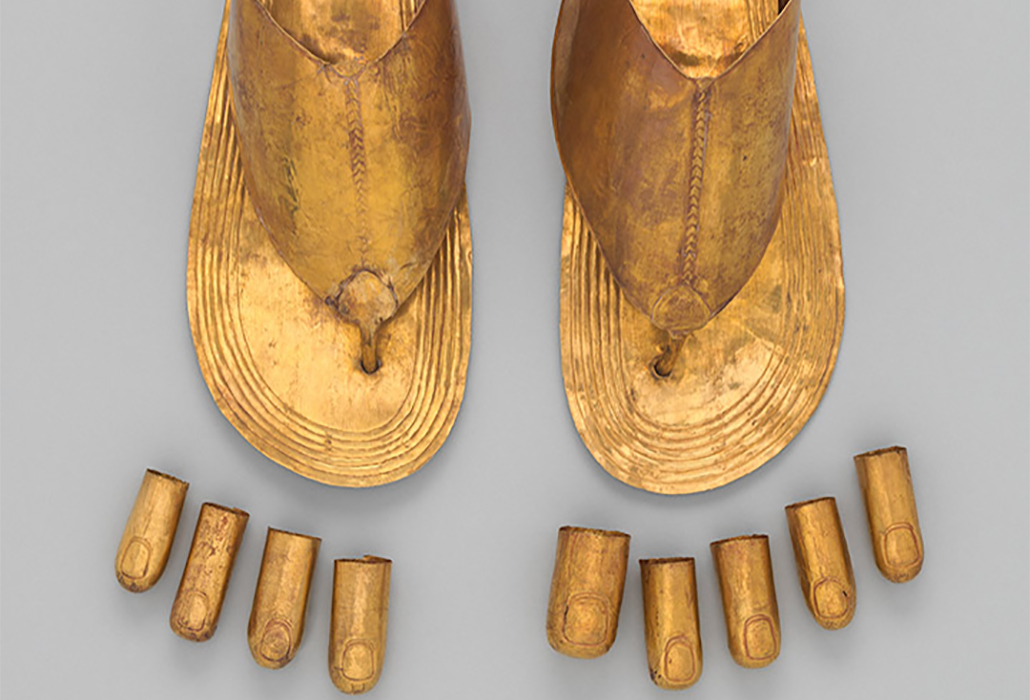 It is also a contrast for the ancient simple gold sandals with toe stalls from the New Kingdom in ancient Egypt, during the reign of Thutmose III (1479 – 1425 years before the Christ event. The sandals belonged to the funerary accoutrements of Thutmose III’s Egyptian queen and similar gold sandals were found on the mummy of Tutankhamun, a descendant, who ruled at the end of the same dynasty.

A new exhibition at The Met Fifth Avenue, New York, Jewelry: The Body Transformed, will explore how and why this form of human embellishment, jewelry (jewellery), both acts upon and activates the body it adorns.

Starting November 12, 2018, some 230 objects will be drawn almost exclusively from The Met Collection, representing both extinct and extant cultures, they will be sure to dazzle and amplify the stories of transformation they tell. 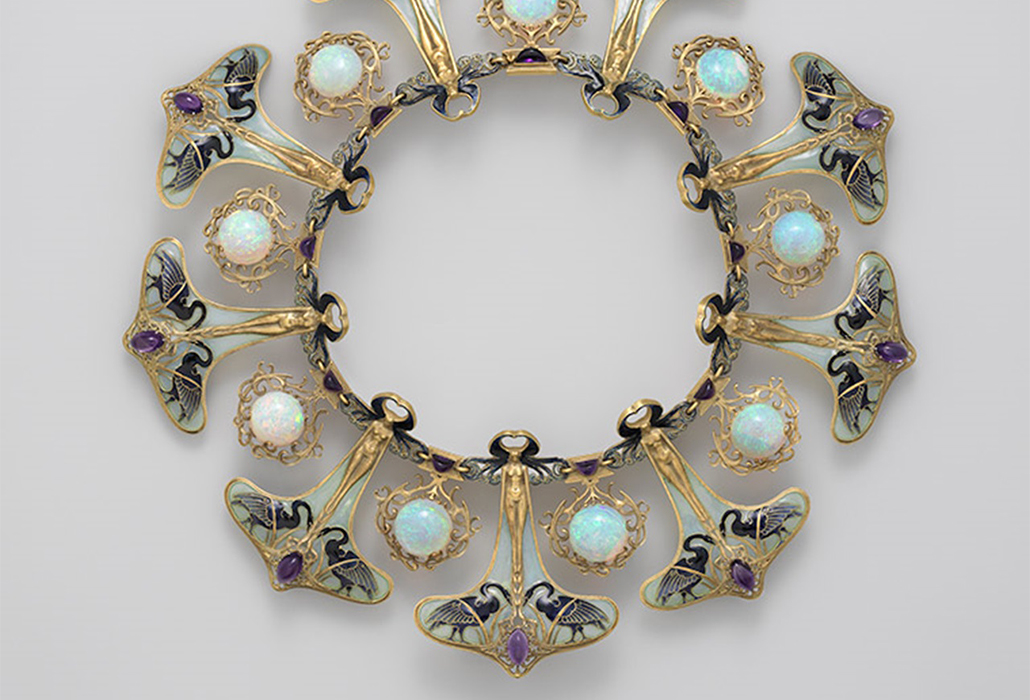 Must say I wouldn’t mind wearing the amazing necklace by French genius and master of Art Nouveau styled jewelry René-Jules Lalique, manufactured between 1897-1899 of gold, enamel, opals and amethysts.

A powerfully evocative ornament, he designed it for his second wife, Augustine-Alice Ledru. It was shown first at the Paris Exposition Internationale Universelle. “Exposition Centennale de l’art français (1800–1889),” from May–November 1900.

Tradition, innovation, function and the fates have all been involved in the development of jewelry. Headdresses, ear ornaments, brooches and belts, necklaces and rings will be shown alongside sculptures, paintings, prints, and photographs reflecting how what we wear, is an ever-changing form of human expression. 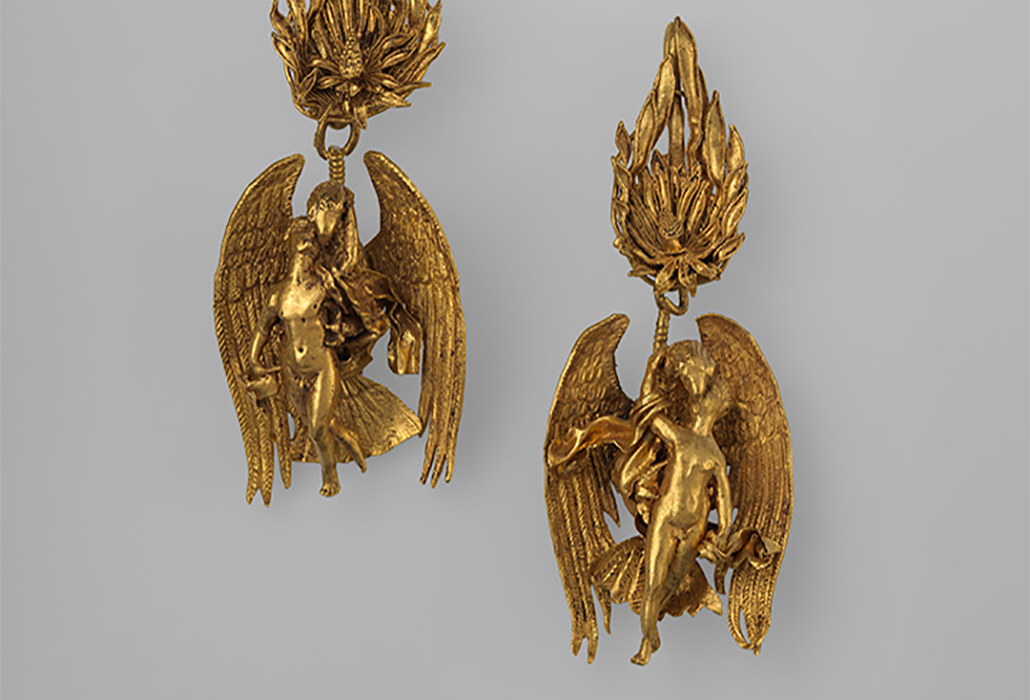 A simply stunning pair of gold earrings formed some 330 – 300 years before the Christ event in ancient Greece showcase a finely worked three-dimensional figure of the Trojan prince Ganymede.

Sculptural masterpieces in miniature, the airborne theme shows him in the clutches of Zeus, who has assumed the guise of an eagle.

Hanging below a large honeysuckle palmette, he hangs freely in space, the design reflecting how he was carried off to Mount Olympus to become a cup bearer for the Gods 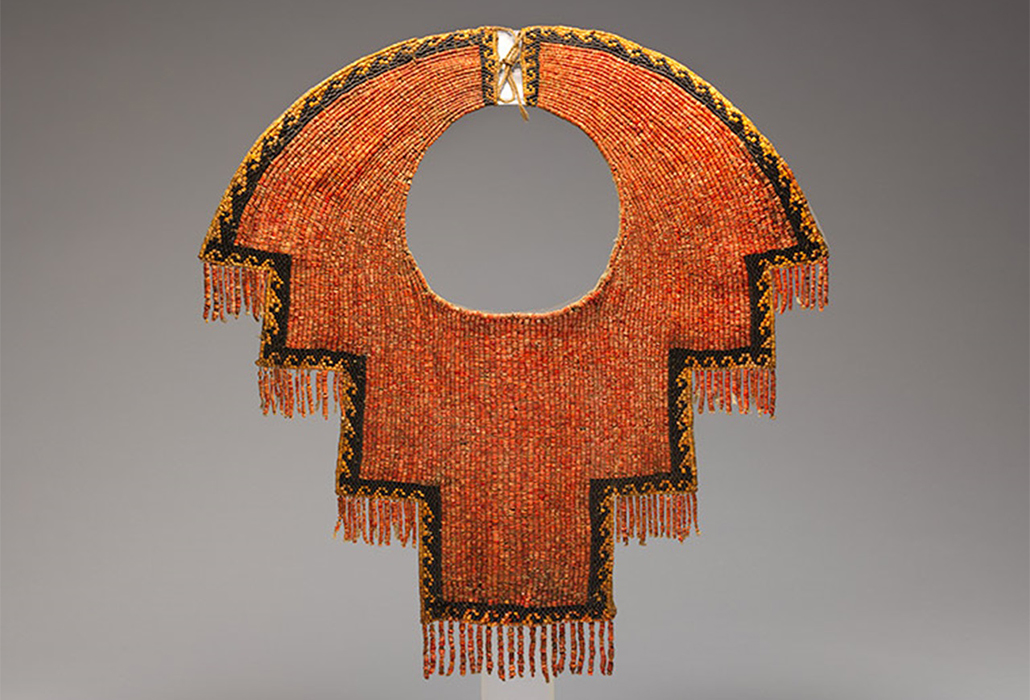 We could be forgiven for thinking this is an ‘art deco styled’ collar, with its stepped design. It was found in Peru and reflects the craftsmanship and materials used by the Chimu culture, from the 12- 14th centuries.

Made of tiny red-orange Spondylus shell, which were teamed with black stone beads, the collar would have been worn over the shoulders so the step design cascaded down the individual’s chest. Such an ornament for the body was often associated with abundance, as well as underscored the wearer’s role as ‘a nexus between supernatural forces and earthly well-being’.

The Chimu empire fell to the Incas during the second half of the fifteenth century, and its capital Chan Chan was famed for its artisans for over four hundred years. Spondylus shells had been worked into regalia since the first millennium BC, and were said to signify the wearer’s connections to divine power. 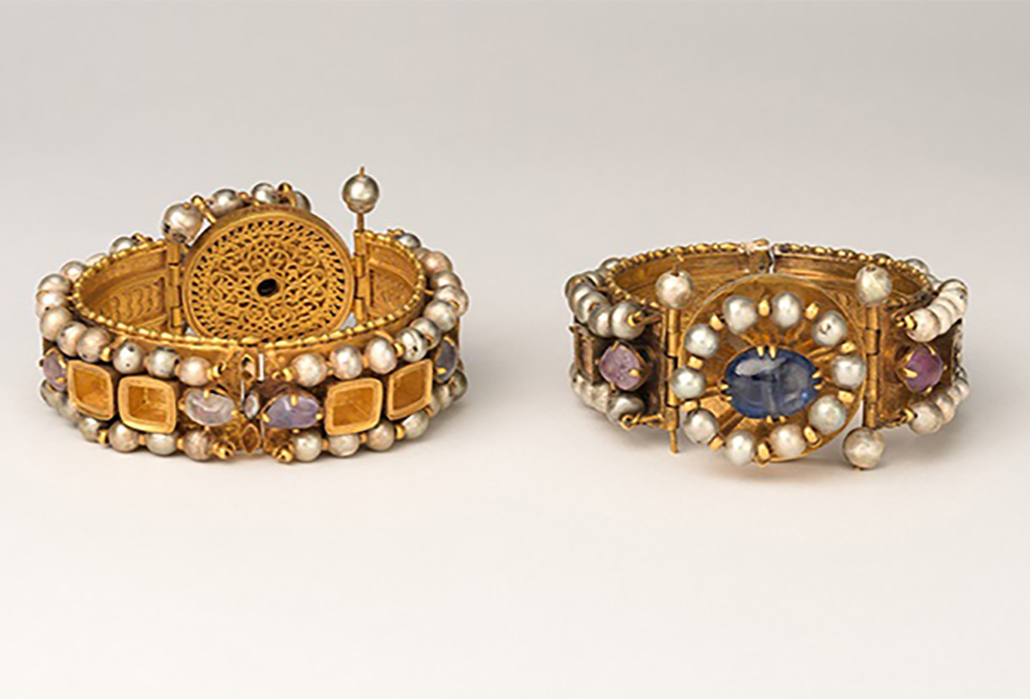 A pair of jewelled bracelets made of gold, silver, pearls amethyst, sapphire, glass and quartz, date from 500 – 700 in Byzantium, where the luminous beauty of pearls was highly prized. 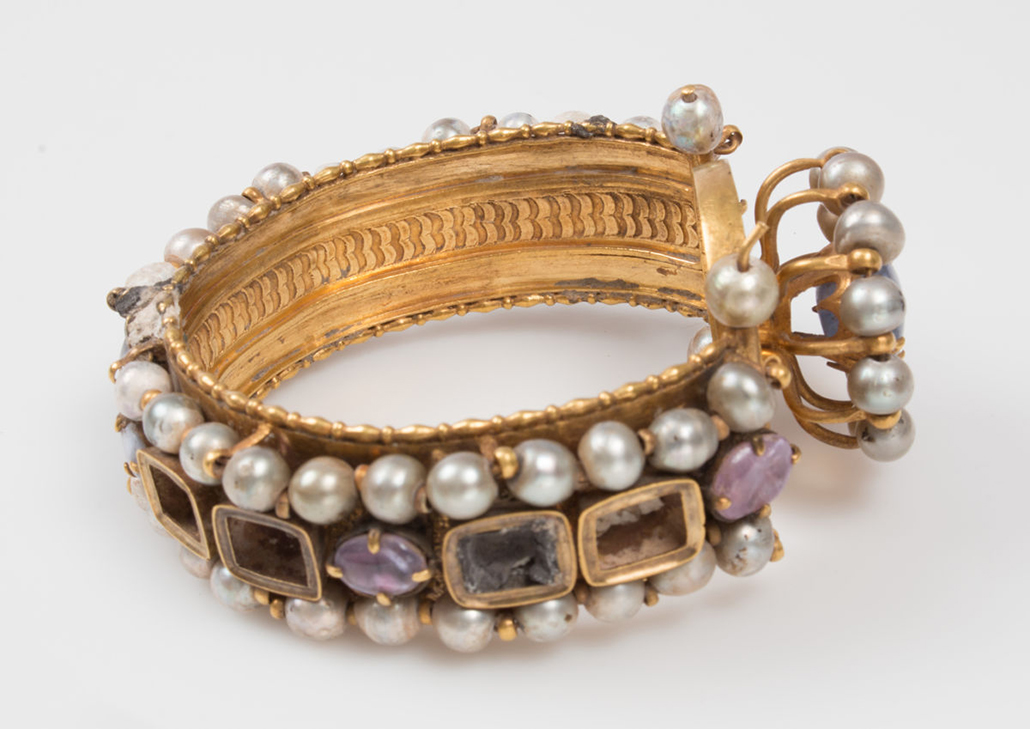 Unquestionably, the leading centre of a culture paralleling the Middle Ages in Europe, its fabulous city of Constantinople is said to have been ‘a golden bridge joining the East and the West, and this refers to its art, no less than to any other sphere of activity. 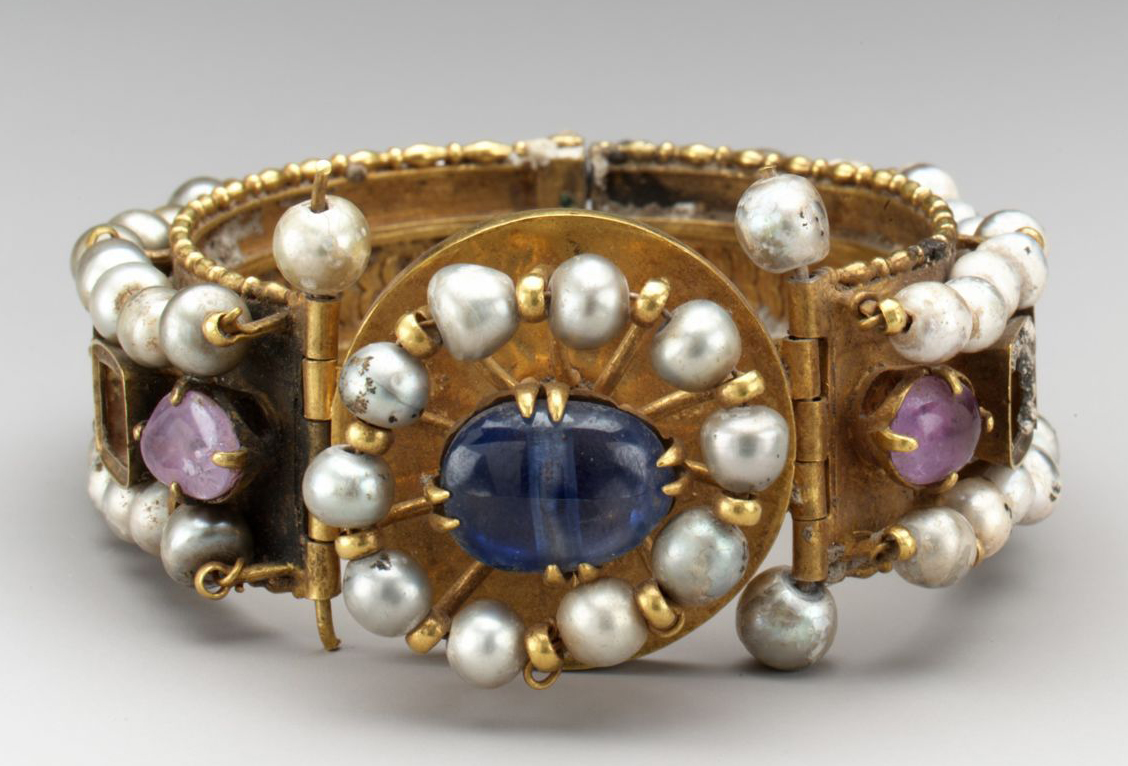 Last month Fashion Elixir editor stylist Jo Bayley and I attended the InForum Group‘s excellent presentation by veteran fashion editor and commentator Marion Hume at Mossgreen Gallery at Melbourne. The evening was a great success. Everyone appreciated the warm welcome, the setting, the culinary delights and Marion Hume’s candour, as…