WOW, seems not enough to say when you view the often eccentric, simply quite dazzling jewelry (jewellery) made by the very clever creative Joel Arthur Rosenthal (JAR).

Jewels by JAR, a sensational new show at the Metropolitan Museum of Art in New York commences on November 20, 2013 and will run until March 9, 2014. It is billed as the ‘first retrospective in the United States of his work’ and the first entirely devoted to a contemporary artist of gems.

Doesn’t get much better than that.

At auction in Europe and America JAR’s contemporary jewellery sells for quite simply staggering sums of money, made for select celebrities. They gain an appointment if he accepts to see them or allows them to purchase what he believes will suit them, not what they like. Barbara Amiel reporting for The Telegraph who was granted an interview said he observed that “Getting the right things on the right people is part of making those things. I can’t do it three generations from now but I can do it now and I have to do it now.”

For many JAR has become the greatest of all the jewel makers of our time, just as Louis-Francois Cartier, Peter Carl Fabérge, and so many others before him were in theirs. Vanity Fair described him once as Le fantôme de la Place Vendôme.

His showroom, while enviably on the Place Vendôme at Paris, has no display window to the outside world, only a bronze camellia with a stamen as an entrance button into another world. 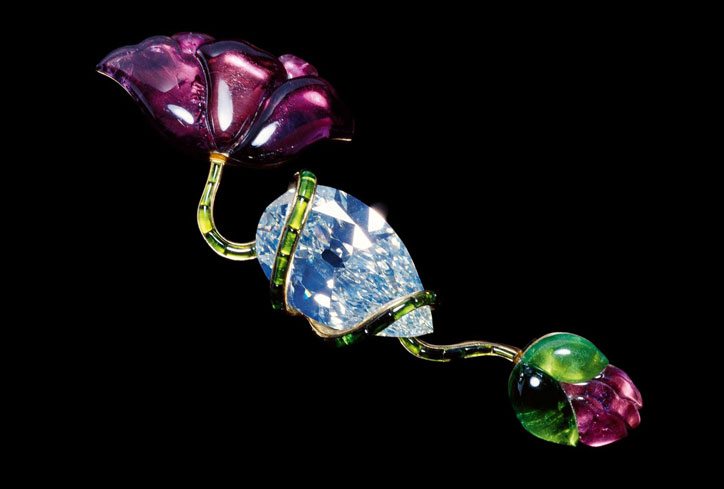 At the Lily Safra Sale, Christie’s New York this year some very fine pieces by JAR sold at record prices. His amazing ruby ‘camellia’ brooch gained a staggering $4,319,591 and his Tourmaline and Diamond Flower brooch $1,272,245.00.

Wearing Jewels by JAR is a sign of singular status, one he alone endows, revealing his total grasp of ‘less is more’ marketing concepts and wielding a single supreme power of influence.

He is not a trend follower, but a trend setter, one who knows that true value is attributed to the unique, rare and wonderful; his jewels are the perfect combination of tradition and modernity, bold but never flashy.

They catch the light to reflect the brilliance of colours that are delicately real, quite exquisite and very beautiful to behold. JAR puts the glitter into the term glitterati.

He does not keep regular hours, doesn’t advertise, except through media editorial coverage or as arranged or acknowledged by the celebrities who pay enormous prices for his jewels. They phone and gain approval to visit.

Today he has a ‘cult’ following; all who speak his name do so with reverence and only in hushed tones not wanting to offend. It is unknown what form his wrath would take if they did!

The Metropolitan Museum of Art in New York in producing this landmark show of some 400 pieces of his work, has elevated him to the realm of exceptional artist.

So how seduced are we by JAR and his magical manipulating of heavenly stones from the earth? Well a great deal it seems.

There is a wonderful story about how 400 pieces of JAR‘s jewellery went on view to the public at London. Flashlights were given to the guests, whom it was reported, ‘groped and gaped there way from case to case’. His point of view I am sure would be that under light these magical stones gleaned from the earth come to life in this way, revealing their true beauty and glory.

It is the same experience miners underground had for centuries, making them continue their search for precious minerals from the earth.

If JAR was not a very talented, skillful creative his jewels would have never received merit at all, unless they had all the factors that elevate them into the world of art.

Until now and this Met show the rest of us could only asses his genius by looking at the stunning visuals associated with his works sold at auction, in magazines or through Online sites.

Must admit I wouldn’t pinning the simply stunning cameo and rose petal brooch made in 2011 to my ample bosom. Now in a private collection it’s sure to be a star turn at the show.

JAR‘s fame and success has evolved over a long time from the days when he went to Harvard to study art history and philosophy. There is scarcely a woman alive who would refuse a piece of his jewelry, especially after seeing it first hand in all its exquisite perfection.

He uses amethysts and garnets alongside diamonds elevating them all to precious stone status.

After university JAR moved to Paris and found a partner Pierre Jeannet a Swiss psychiatrist. They spent a great deal of time researching everything, especially antiques in shops, museums, galleries and auctions, immersing themselves especially in antique jewellery styles.

It was 1973 when they first opened a shop on the rue de l’Université selling lovely needlepoint. The shop was all about an artist painting with a needles, not a brush, with JAR busying himself learning about and determining the palette of colours he preferred. They closed it down after a year in business.

Bouncing back to Bulgari in New York to learn more about jewels first hand for a short time, in 1976 he returned to Paris where the pair opened their first intimate salon on the Place Vendôme. JAR used inexpensive stones at first, while he focused on learning techniques.

He moved next door with expansion in 1987 and by then he had mastered the pavé technique, where you set the stones so close together they form a precious pavement of jewels.

He also began working with exceptional craftsman and exceptional stones, specializing making jewels fulfilling his own aesthetic needs, rather than pursuing commercial ambition. Materials were chosen for their colour compatibility with the stones preferred, which included ‘blackening’ expensive metals to achieve a ‘look’ desired.

The superb color matching and the shading of JAR’s pavé technique became his signature. Jeannet summarizes Rosenthal’s process this way: “At every step of the making of a piece, he checks and corrects. And if at the end his eye is not happy, we destroy the piece. But the piece, finished, is not yet at home; his last look is to see that the jewel has gone to the right lady. Then he sighs, his work is done.” 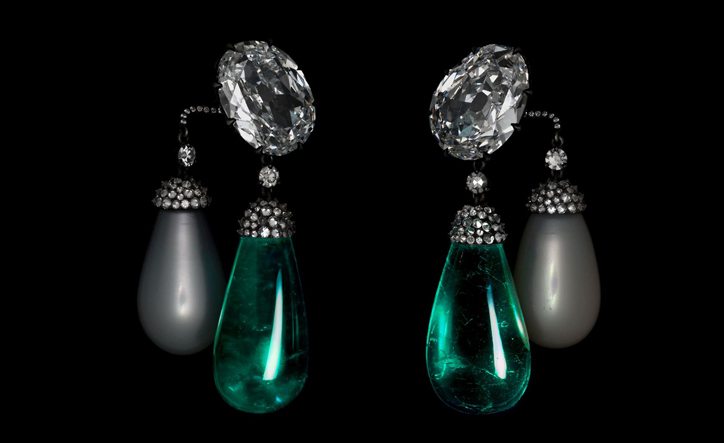 Nothing really much else to say really, except do look at some stunning jewels by JAR. You will be quite amazed I am sure.

Looking at his emerald, oriental pearl, diamond earrings set in platinum I can well understand the lady who wanted to ‘mortgage her house’ to own a pair of his earrings. These are certainly my ‘cup of tea’ and if I owned a house I may be tempted too. If you are in New York over the Xmas season Jewels by JAR will no doubt be a dazzling show, one that will warm the heart, challenge the head and have your hands just itching to pick them all up and try them on. The Australian Reading Hour takes place each spring, a time for rebirth, refreshment and renewal and this year it is scheduled for Thursday, September 14, 2017