Celebrities are always in the limelight, be it at award ceremonies, movie premieres or just being snapped by the paparazzi, so I thought we could take a look at my top five (5) female celebrities who have done it best in 2013.

In a year of fabulous fashion and trends not many stars got it wrong.

Sure there were the usual shockers, hello Miley Cyrus and the the art wearers a la Lady Gaga, but all in all everyone played it fairly safe.

These women are my standouts, and as I always say when it comes to my lists, it is purely personal choice.

You may agree or disagree, but that’s fashion for you. I’d love to know your thoughts!

First up is arguably the queen of couture, the ethereal Cate Blanchett. Lauded for her role in Woody Allen’s 2013 hit “Blue Jasmine”, Blanchett has wowed audiences with her superb performance in the title role of Jasmine.

There are ever whispers of an Academy Award nomination for 2014.

That being said she could win a best dressed award hands down.

This year we have seen her in some of her favourite designers Armani, Alexander McQueen, Givenchy and Balenciaga.

It is the Balenciaga that made me add her to this list.

This creation is not easy to wear and Cate takes the fuss away and puts the whole look at ease.

Not an easy exercise, but she nails it and the colour is perfection on her. Diane Kruger is always a standout.

Ever since I saw her in the Quentin Tarantino blockbuster “Inglorious Basterds” she has been on my radar.

Fluent in three languages, Kruger is not only smart but beautiful too.

With a penchant for Chanel, she has known uber designer Karl Largerfeld since she was 16, Diane is timeless in her sartorial choices.

Sometimes quirky but always on trend, she is a favourite with fashion editors worldwide. Michelle Williams is a personal fave of mine and this year has been no exception.

My favourite memory of her is at the 2006 Academy Awards with her then love Heath Ledger on her arm.

She was breathtaking in red lipstick and sunshine yellow Vera Wang and they were clearly in love.

Fast forward to 2013 and Michelle was named as the face of French design house Louis Vuitton.

Their collaboration has been a match made in fashion heaven.

Williams is cute and quirky, sexy and sophisticated all at once. She has a very adaptable look.

I’m loving her edgy haircut that can be worn in so many different ways.

Adored her in the peacock blue strapless frock by Burberry Prorsum. 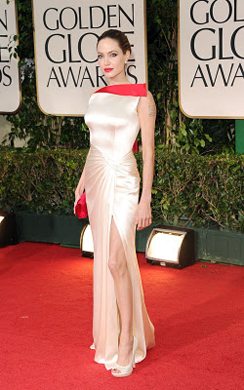 This year has been one I’m sure Angelina Jolie will never forget.

After undergoing preventative surgery to ward off breast cancer, she hit the red carpet with grace and style.

Jolie’s choices have been classic and classy, something that she has proven to be in and out of the spotlight.

A great advocate for the underprivileged and a UN spokesperson as well, she has shown bravery in her own personal fight.

While Angelina evokes images of a wild, dangerous woman, her clothing tells another story.

Her bold cream Versace dress with the dramatic red accent at the Golden Globes was both simple, yet surprising.

Wearing it with her hair pulled back into a bun at the back was just the right touch, as was that wonderful red lipstick.

Never garish or outlandishly sexy, she lets her personality shine through and her frocks are the perfect foil to let her smoulder.

Even better when she adds her best accessory Brad Pitt! Academy Award winner Jennifer Lawrence has been having a love affair with Dior, and it seems it the feeling is mutual!

Sporting a new “pixie” ‘do for her worldwide premiers of the new instalment of the Hunger Games franchise “Catching Fire” it seems heroine Katniss Everdeen is growing up and getting her style groove on.

She has fined tuned her red carpet glamour starting in February in Lanvin and donning Dior at the 2013 Oscars, where she unforgettably tripped up the steps to receive her Best Actress Award.

She rocked in an age appropriate two piece Alexander McQueen and Jimmy Choo heels in Madrid, and looked flawless in Proenza Schouler.

It is not just her style, but her sassy attitude that adds her to my list, and makes her my best dressed for 2013.

So there you have it!

I love individual style which is what each of these ladies ooze.

Who do you think deserves to be added to the list?

It seems as if Channel Seven’s saturation marketing techniques over the past few weeks worked according to this mornings reviewers and ratings. Last night the superb British television period drama series we posted about back in January, gained both high praise and record numbers tuning in. Downton Abbey is a series of fascinating stories about life upstairs and down, for the new gen and the new age