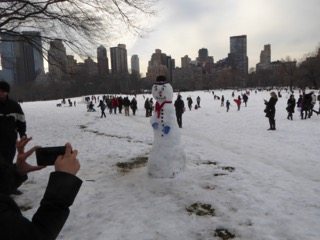 John Andrews here – I have a house exchange apartment – a small, one room wide, but convenient at West 55th and 10th. I just walk seven blocks north and I am at the Lincoln Centre, or four blocks east and six blocks south to Times Square.

There are lots of restaurants around here too. The city is so safe and taxis are relatively cheap into the bargain. 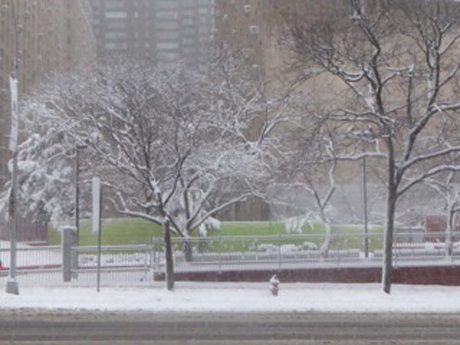 My first full day and I am off to the Whitney Museum of American Art. And as you can see it’s snowing. Everywhere is a blanket of snow and the snowploughs are already busy cleaning streets while workers clear the pavements.

And slush begins to form as cars hurtle along and snow piles up gutter side and at intersections.

In the case of the latter you need a keen eye to survey the scene and decide it’s safe to cross over lest you end up in a deep puddle. I can now vouch that my shoes are indeed waterproof!

The Whitney Museum of American Art is a very modern and a recent addition downtown to the museum scene having moved south about 100 blocks! 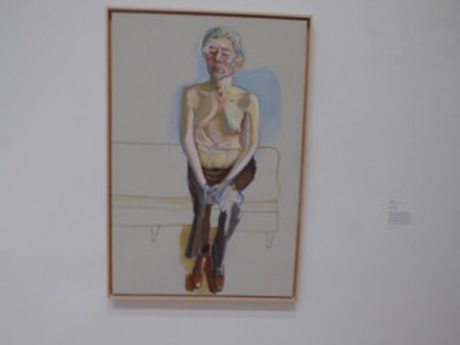 The walk from the subway was at times challenging – seeking areas without ice (touchwood, I have not slipped YET. I was told back home the tread on the soles was sufficient to prevent that happening, but is there such a product?)

I was underwhelmed by his work entitled ‘six inches of knee stretched to six feet’.  I wondered if David M and my cousin, Sue would be inspired.  Should I purchase it for either of you? Methinks not. 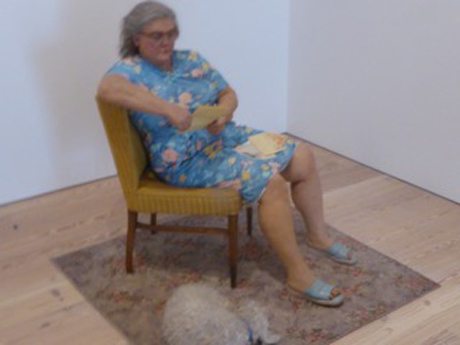 On the other hand… this sculpture is so lifelike I almost spoke to her because I thought she was out of her time.

One of the visual treats of snow is how it clings to things, enhancing their outlines as well as clinging to any plant or awning in its way: I returned to the Chelsea market for a lunch of hearty soup before again braving the elements back to the subway. This time I realised there were verandas on the opposite side of the street for a significant amount of the distance I had to traverse. The wind was chilly even if the snow had stopped falling. 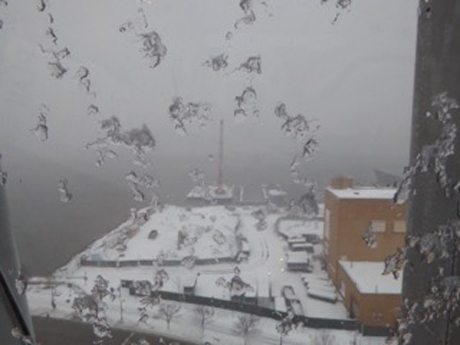 I got out later at 5th Avenue, as one does on a Thursday afternoon. Some lovely shops here (often very expensive). I was tempted by the silverware if not by all those brands found in Melbourne my hometown – Gucci, Ralph Lauren, and Tommy Hilfiger, and so the list goes on.

Getting closer to Central Park I noticed a makeshift barricade, which seemed to go across in front of one building and then Tiffany’s… Audrey certainly wouldn’t have worn that dress at this time of year! 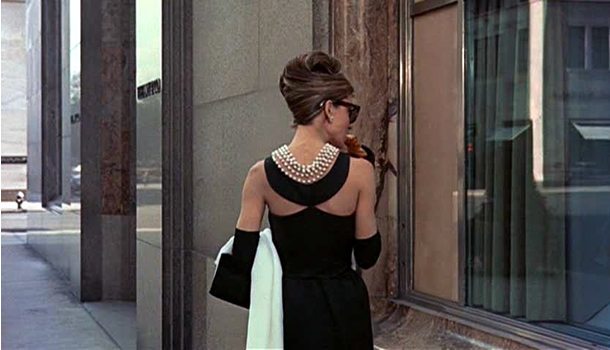 Since I was heading to Tiffany’s why not go on the far less crowded side of the barricade.   SO I DID.

Yes, readers, I was in front of Trump Tower (not Trump World Tower which is elsewhere) where armed police stood on duty. I did not take a photo lest I breached security.

Later I learned that the police cars, at least six and additional police in the side street were all part of the First Family’s security. I am told in NYC and DC the security bill for the Trumps is one million dollars a day. Anyway, I rushed into Tiffany’s where breakfast has not been served for years, if ever! (Well I learned later that it had, from time to time – since the movie).

Tiffany’s has a very elegant and genteel feel to it and I felt genteel and elegant trying on men’s rings.

Not wanting to appear un-impetuous (is there such a word), I told the salesperson (or what ever they are titled at Tiffany’s) I was in New York City (NYC) for several weeks and might return. Past the Apple Store, through more piled snow, slush, and lots of deep puddles at intersections and then on to Central Park for a brief interlude.

The cold wind depleted my enthusiasm (‘dampened’ seemed an inappropriate verb). Youthful spirits, mainly teens and in their early 20’s, were having a wonderful time on sleds.

Out of the Park and homeward bound, I am doing lots of walking when circumstances permit. The dark tower at the centre is Trump Tower.

The statue proves it is a colour photo. New Yorkers seem to have adopted the Melbourne uniform of black! And I have learned that if you survey the scene at an intersection and walk around the snow and slush (all gradually dwindling) you can avoid the puddles.

I must be a quick learner because no one else does that! I at least stay dry – and avoid the traffic! On the way home – about 57th street or thereabouts, snow + tree branches = a lace like effect. 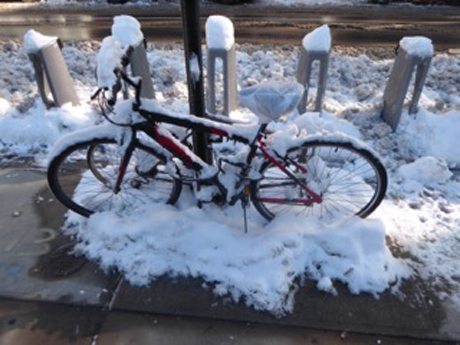 The next morning I realised that bicycles were in low demand.

I know the crime rate in NYC has declined over the years, but to such an extent that police cars don’t move overnight.

Lots of Russians live near where I am staying.

I have also seen the Russian Club and Russian Restaurant and the Museum of Modern Art, which has several simultaneous exhibitions, plus two levels of permanent displays, including Avant-Garde Russian Art from the 1920s and 1930s. 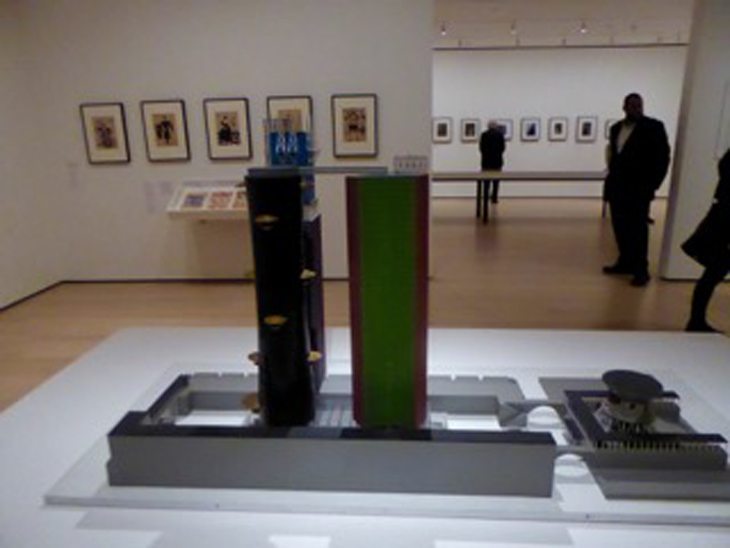 Two examples follow (very European/American): you all probably know this (but I didn’t), but this is the 1934 winning model of the People’s Commissariat of Heavy In dusty three was proposed to be built in Red Square ‘in close proximity to the Kremlin and Lenin’s mausoleum’. Thank goodness it was like so many government grand projects – capitalist, communist or whatever- and never realised. The architect if you are interested was Ivan Leonidov.

I was feeling tired (exhausted”) that day and left the Museum to just walk around. Gordon will be pleased, as I was to learn that NYC also has the chain, Le Pain Quotidian, which serves simple elegant boulangerie fare as we first came across in London near St Paul’s Cathedral.

A Baker’s lunch including hearty chicken and vegetable soup was soon devoured. And later I found Bloomingdales where I don’t think the black exterior does it credit. Perhaps black is the new gold.

Inside it looks just like Myer Melbourne’s stores. Having lost one scarf in Boston I did not find another to my liking there. And still searching for clothes for my great niece and nephews. 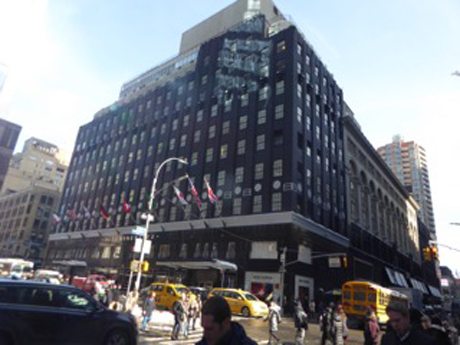 And so on Saturday it was off to the Museum of the City of New York from its European foundation as a Dutch colony, New Amsterdam to 2012.

A few worthy hours spent before heading across the road to Central Park. 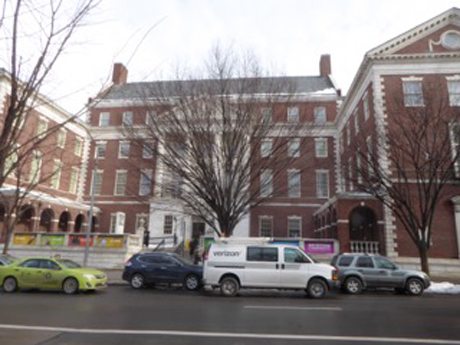 For those of you who love architecture, you will probably see the resemblance to John Quincy Adams here: Central Park: About 103rd Street 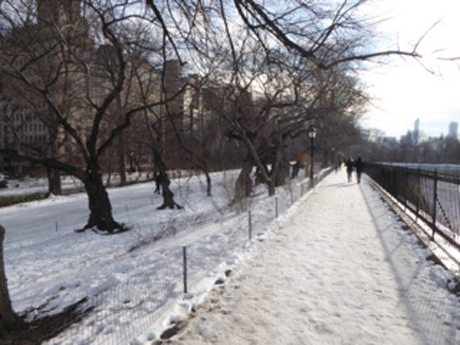 Walking along the east side of the Jackie Kennedy Onassis Reservoir in the Park.

Now, that’s a pathway of ice!

People worldwide do the same things, including making snow people in the snow!!!!!

And in this case, a grotto up front. 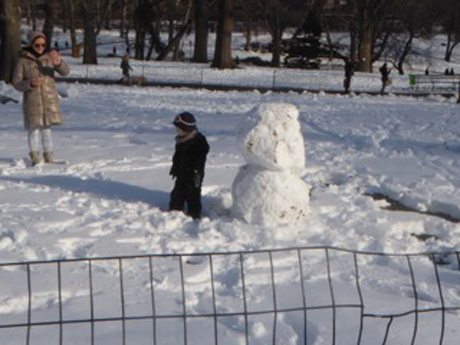 One young boy, no more than 2-3 years of age was having a wonderful time building his own snowman though Dad made two major contributions. Shall we say his son filled in the gap?

Further along people were gathering and here, when I finally pushed and shoved my way through I could sort of see the annual ice carving competition.

It was 3.30 and I decided that if the crowds were like this and worse I was not hanging around for the spectacular (whatever it was) between 5 and 6 as night fell. Just part of the endless crowd coming to and leaving the Ice Sculptures, which you could only partly see because of the crowds. 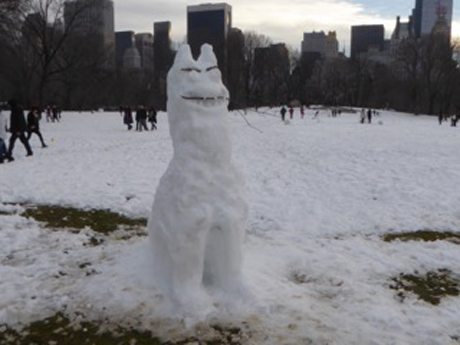 And those up front had no intention of moving!

And then further across this open space towards the west, a snow dog of sorts: I am seeing Rusalka on Monday night (last scene in Prague, as you would) and I Puritans on Tuesday:

And then the home of the NY Philharmonic Orchestra (day and night): I decided to see if they had a single ticket for the final night of the Tchaikovsky Festival. A most wonderful night was later spent.

Semyon Bychkov who had been ill the past nights, conducted the Pathetique.

I forgot to mention that, in a state of total depression after failing to buy a scarf or the clothes at Bloomingdales, so I returned to Tiffany’s...

I am now the proud owner of a piece of their jewellery!

And to ensure my depression did NOT return, I later saw Sally Field in The Glass Menagerie. An excellent performance as that controlling, nagging mother and only once did I think of her as The Flying Nun from all those years (decades?) ago! 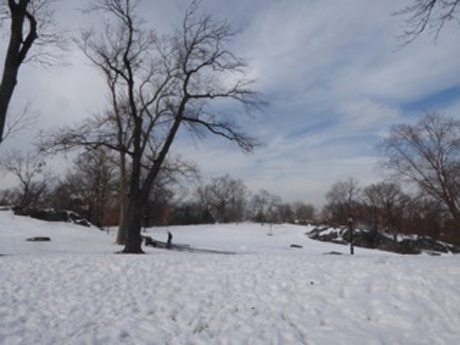 PS It actually felt VERY warm at Central Park and afterwards; probably helped by walking from 103rd to 55th Street.

Rained all day today and so all of New York went to the same museum I did!

All images of New York in the Snow, ©John Andrews 2017 and used with his kind permission. 2 x Tiffany excepted

Thursday the 8th of August saw Australia’s other retail giant Myer, showcasing its fashionable wears for Spring-Summer 2014 Over 500 guests rubbed shoulders at Fox Studios to see the latest trends from Myers fashion family. Jennifer Hawkins, Kris Smith, Laura Dundovic and Lauren Phillips were out in force as Myer…