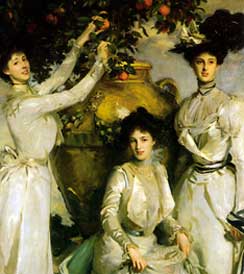 The Acheson Sisters by American painter John Singer Sargent (1856-1925), are represented in nature. They signify not only the traditional base of the aristocratic power in land ownership, but also link femininity to nature, in opposition to masculine culture and the dominance of state and government. One of the great painters of the late 19th and early 20th centuries, John Singer Sargent made his fortune and reputation as a portrait painter of beautiful women and influential men. Raised in Europe by an American expatriate family, Sargent attended art schools in Paris. Precociously gifted, he assimilated lessons from the old masters, the contemporary Impressionists and the Spanish painters Velázquez and Goya, producing a spectacular array of exciting and masterful paintings while he was only in his 20s. At the 1884 Paris Salon, his portrait of 23-year-old American beauty Virginie Gautreau, shown with bare shoulders, overflowing bosom and haughty manner, scandalized the Paris establishment. It is hard to imagine when viewing it today that the picture, known as Madame X, crippled Sargent’s hopes of establishing himself as a portrait painter in Paris. 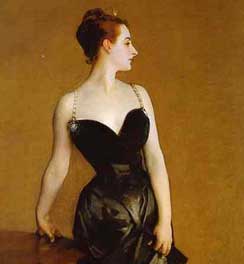 Starring Adrian Brody and Sam Neill, mystery thriller Backtrack is directed by Michael Petroni with a musical score by Dale Cornelius, to be released worldwide