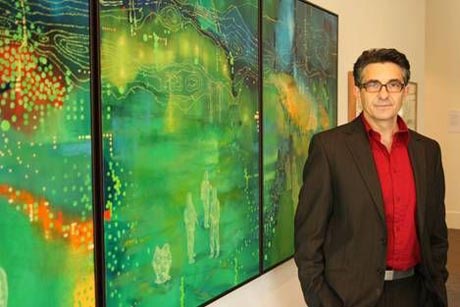 Well-respected contemporary Melbourne based painter Jon Cattapan (1956 – ) has just opened an exhibition of his works at the Kalimanrawlins gallery in South Yarra at Melbourne, which runs from 3rd – 24th November 2012. Cattapan has been surveying the world from his own contemporary perspective for more than three decades now and is regarded as high on the list of Australia’s artistic elite. With large richly conceived and carefully cast colours on canvas and linen he seduces us to pause and consider what art is, and what it is not.

During his stellar career Jon Cattapan has remained resolute in his commitment to his own philosophies and attitudes about art, while investing it with ambiguity, ‘a kind of crackling uncertainty’. Down the decades he has reacted to social and cultural influences, both locally and globally, as he journeyed forward from his late 70’s art school to take on, and produce his impressions of the realities of urban city life. Some of his works have a recognisable narrative, while others simply allow the voyeur to bring their own interpretation of what his contemporary arrangements of rich and stunning colours might actually mean. All his works shine and shimmer seductively in the light of day. With added luminosity at night they can take you on a voyage of self-discovery, especially if you warm to their message.

You can easily find yourself drifting quietly as you engage with the magic of the nocturnal atmosphere Cattapan magically conjurs up. Some of the works in this exhibition, include human shapes emerging from the depths of a challenging contemporary illusionistic cityscape in an endeavour to surmount the difficulties of life in an ever increasingly harsher urban environ. He is providing us with a vehicle to individually contemplate the multifaceted ways that he plays with notions about time, form, light and space.

He revels in producing works that reflect the often more complex and broader issues and themes derived from the political, intellectual and philosophical aspects of our social and cultural landscape, in the challenging ambiance of the metropolitan environment in 21st century Australia. His distinctive visual language constantly comments on the vagaries and complexities of the human condition. Encountering a ‘raft of hard rubbish’ recently on a sidewalk he became inspired to explore what the objects some people discard really represent and how one person’s rubbish can be another person’s treasure. In an area of our world defined by war through night vision goggles, which enhanced and elevated his experiences deeply felt, Cattapan viewed first hand and experienced the unease and uncertainties of life.

In Timor-Leste in July 2008 he observed another culture struggling to come into the new age when he gained a commission for the Australian War Memorial.

There he was able to gain an insight into the role Australian peacekeepers have and from his experiences created a series of works interspersed with the daily activities of the Australian Defence Force (ADF). Jon Cattapan has been assisted by scholarships and grants so that he was able to travel, observe and embrace other cultures so that he could learn a great deal about the specific influences on their art.

He has lived in Europe, the USA, England, Japan as well as at Castlefranco in Italy. New York city also beckoned him for a while and when he returned home he completed degrees at various Australian institutions.

Ancestrally he is drawn back to Castelfranco, that small historic walled town in the beautiful Veneto region of northern Italy. It is sited nearby the Villa Cornaro and Villa Barbaro at Maser, Treviso, which was the preferred setting for ‘classical’ villas of Venetian nobleman, especially those designed by Venetian architect Andrea Palladio (1508 – 1580).

Castelfranco is where one of the Renaissance’s most mysterious and elusive painters Giorgione was also born and although he died very young, and painted very few works, the influence of Giorgione would be ongoing.

Giorgione focused on the sensuous surface of things, on color and texture. In his time to an unprecedented extent mood became his primary subject with atmosphere composing of light and shadow softening and unifying the landscape and figures in it.

Interestingly Cattapan and Giorgione seem to have many of these characteristics in common, both feature that elusive poetic quality in their work, although each to their own age.

In India ‘red’ affected Cattapan deeply. In the west red is associated more with passion, seduction and sensuality while in the east it is about dynamism, the rituals attached to the marriage ceremony and traditions of the class system. It is also about representing symbolically how every individual must leave their childhood behind when they embrace adult life.

Its association with the most revered of the Indian gods is about simplicity, wisdom and spirituality, protection and commitment. His blue green works are seemingly associated with pathos, that in the ancient Greek tradition implies something so much more than simple emotion: it refers to that inner universe, one to which man is drawn attracted to by the very nature of his own complexities and contradictions of character.

Cattapan’s work ‘Melbourne Panels’ for the National Gallery of Victoria was a commission from The Hugh Williamson foundation.

Conceived as a triptych of a slightly surreal Melbourne city nevertheless the various shapes slowly unlock and merge to expose the seething metropolis that exists through its most iconic images.

They shimmer and sparkle under the richness of the deepest blue night sky, disposed on a rich and resonant colour-saturated ground. Represented at Sydney by the Dominnik Mersch Gallery and at Brisbane by the Milani Gallery, Cattapan draws visual metaphors as he inspires we the viewer to keep up our relentless search for a physical ‘lightness of being’, while trying to answer some of the bigger questions that confront the contemporary age.

It’s all about our sense of belonging to a particular place and at a particular moment in time, where so many other forces come into play. Who we are impacts heavily on the progression of what happens next.

He uses technology techniques to formulate and plan out his work before embarking on the journey of production. As he progresses unexpected encounters with his nemesis colour, as it is being applied to the canvas, often assists him to met morph the project into another transient place, one where he can allow his creative forces to take over.

They often lead him along a new path and when he finalises the work it happens in such a way that is most often very surprising, especially from his perspective.

In an interview with Ian North in 2008 Cattapan said

For the last couple of years I’ve moved back into narrative mode as a counterpoint – demonstrations, protest, sundry calamities – these too are part of our cities. They are weird barometers for our times

… ‘I’ve always been interested in Surrealism and in my own works there was for a time a kind of dream – tableau that the actions unfolded upon, but in particular it was the writings of Louis Aragon that struck a chord for me.

In his book ‘The Paris Peasant’ he speaks of drifting around Paris by night and coming across its urban markers as though they were magical hallucinations. I guess in part I tried to transpose those sentiments into a colour sense. Those deep blues and greens offer a sense of that drifting – of the fugitive – of the twilight – of being there but not there’. NB Images used with permission of the artist

‘From The Land’ at the Incinerator Art Space from 25 June -13 July is “an exhibition by the masters of the Western, Central and Tanami Desert painting movements