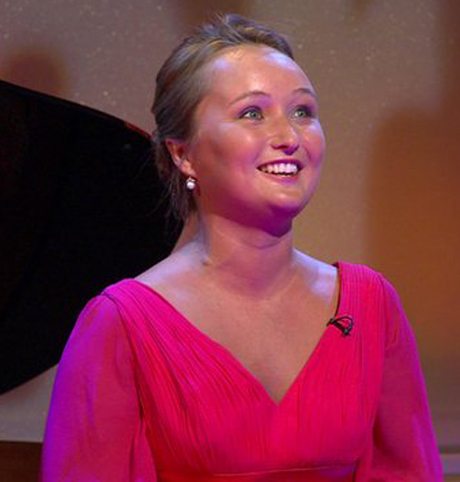 Julia Lezhneva, “… a jewel in the crown of Hobart Baroque” said Leo Schofield, adding his voice to the thunderous acclamation and numerous standing ovations we witnessed being received by the diminutive Russian soprano from her appreciative audience on Sunday night 30th March 2014 at Hobart.

At her concert in Federation Hall performed with the Tasmanian Symphony Orchestra (TSO) conducted by one of England’s finest the very versatile Oliver Gooch, who had flown in from London especially for the event, Julia Lezhneva took the relatively new music festival by storm with her complete artistry.

Aged only 24, Julia Lezhneva has the the poise and presence of a seasoned performer, having been on stage since she was a child. With outstanding technical prowess, purity of tone, perfect pitch and scintillating sounds Julia Lezhneva opened a brand new door for all present on the world of mystery associated with the sounds that can be made with the human voice.

It really seemed as if she came from another realm entirely to the rest of us, a place where light and beauty abounds in glorious quantities and where a voice like hers becomes a symbol for all that is beautiful and fine in our world. The audience was uplifted to a place where it was possible to believe we had all attained a whole new pinnacle of achievement and enjoyment.

There was the beauty of her voice and the radiance of her loveliness, which glowed from within. It shone brightly for all to hear and see through her amazing technique and emboldening expression.

It was the ‘agony and the ecstasy’ all in one and it was hard not to ache all over from the exquisite nature of her performance.

This tiny slip of a girl with a big generous heart and the voice of an angel took us soaring along with her into a whole new world, one where all the stars aligned with the heroes and the angels of heaven and history to give homage to her sublime soprano voice.

There was a defining moment for the audience in the first act when they realized they were in the presence of true greatness. You could feel it, like a ripple that ran around the room continuously as they all took her to their hearts.

In Tasmania Julia Lezhneva became the brightest of all the stars in the firmament, especially those dazzling us with their brightness hovering over the historically interesting and excited city that night. The promise had been there. Some ten days before it had been my joy to be at her only other recital in Australia in 2014, which was held in the beautiful acoustic Elizabeth Murdoch Hall at the Melbourne Recital Centre and had completely dazzled Melbourne with the art of beautiful song. At Hobart Baroque 2014 she had the crisply rendered forces of the TSO behind her. They produced a much bigger sound and Julia rose to all new heights with an outstanding performance. It was a multi-layered enriching experience, one entirely suitable for the space of the Federation Hall at Hobart.

The brilliance of her opening Agitata da due venti from the opera Griselda by Antonio Vivaldi left everyone barely breathing with excitement.

The TSO responding to acclaimed international conductor Oliver Gooch’s versatile direction and Julia completely mesmerized the audience virtually leaving it in a state of suspended animation and exultation.

You could easily sense the excited tension in the room, especially when like a nightingale from heaven she then performed one of Vivaldi’s most delightful miracles, the Zeffiretti, che susurrate from Ercole, sul Termodonte.

As this breathtaking songbird blazed brightly the audience became even more excited and energised.

Her two superb arias from Handel’s opera Alessandro added to their elation. They were both beautiful, revealing her exquisite tone and her mastery of the trill technique; they were both delivered with such grace and elegance.

The Solitudine…Aure, Fonti was so wistful, truly glorious. A protégé of Dame Kiri Te Kanawa, Julia Lezhneva is understated in every way, including how she presents herself, dressed at first in a bright pink gown and after interval in deep blue lavender, with just a hint of glitter from her earrings.

Gentle, with a lovely and pleasing personality on stage Julia is the ultimate relaxed professional who puts everyone at their ease.

Warm, inviting, she shares herself generously with her audience and with her colleagues on the stage who respond eagerly.

Her Exsultate Jubilate was indeed jubilant, a sacred work delivered reverently and with a wonderfully long elegance of expression.

After the concert was all over it was difficult for those present to apprehend what had just happened, let alone speak.

Emotion took over and the grateful, joyous audience just stood, clapped wildly, excitedly and enthusiastically and just kept on clapping until she added two exceptional encores to her already stunning performance.

The encore Lascia la spina is a soprano aria by Handel heard in its first incarnation in his 1705 opera Almira. He then recycled it for his 1711 opera Rinaldo, from which it has become well known and much admired. It is very beautiful. The audience loved her presentation and they applauded and applauded and wouldn’t stop.

Her second encore Son qual nave encore was originally a blockbuster sung in the eighteenth century by Carolo Broschi, better known as Farinelli (1705-1782), considered the greatest castrato singer of all time.

Composed by his brother Riccardo Broschi, Julia delivered it with superb fluidity and great flair. She magically maintained its long elegant runs with her brilliant breath control, once again she revealed her rare mastery over the ‘trill’ technique, while presenting the piece in effortless style.

It was no surprise when the audience went wild yet again. Julia Lezhneva had more than nailed this as well and no one wanted her to go home. But all good things must come to an end.

Pacing her performances well from now on will be critical for her enjoying a continuing career. As a few were discussing afterward, she’s at a point where her voice must be allowed to mature so that it can become even more round, richer and even lovelier – if that is even possible! Julia Lezhneva presented a program at Hobart that was a tour de force of sensational singing, one that will live forever in the minds and hearts of all those privileged to be present on that special evening.

They had all been transported to a place where excellence is usually the pinnacle of achievement in the arts and, if it is to be exceeded it must do so in leaps and bounds, which is what happened.

During my lifetime I have heard many of the best sopranos in the world sing. However on that one night in Hobart Tasmania for me, like so many others, the earth truly stood still.

It was not hard to see the elation on the faces of the players afterwards, pleased that they had been integral to such an important and explosive event. The audience were all ecstatic.

How do you describe near perfection when you encounter it? As in the past most people would experience and express disbelief.

All I could think of to say to her later was how very proud her parents would have been if they had been present to hear their lovely daughter attain such amazing heights. Hobart Baroque festival directors and producers Leo Schofield and his partner Jarrod Carland, who brought this shining superstar to Tasmania, were understandably ecstatic with excitement after it was all over.

It’s the first I have ever heard Leo Schofield, who is truly one of the great wordsmiths of the world, nearly stumped when he tried to express eloquently what we were all feeling.

He thanked her graciously on everyone’s behalf at a party given in her honour at the Henry Jones Art Hotel.

At the after party interstate visitors including critics, radio hosts, industry professionals, musicians and supporters of the arts, who were all busy analyzing what had just happened in Hobart town.

The people that I spoke to agreed it had been an extraordinary night and a power packed performance.

Emblazoned with its bountiful lime green banners fluttering in a gentle breeze along streets full of glorious early Colonial and High Baroque Victorian style stone and brick buildings still intact, Hobart had gleamed gently in the autumn afternoon sun, as I had arrived to attend the first few days of the 2014 Hobart Baroque musical festival.

It was certainly glowing gloriously and with a whole new radiance when I left on Monday morning, although I was sad not to have been there for the rest of the festival.

There were many more fabulous groundbreaking events to follow including more stunning performances of Orlando, the comic opera that had truly delighted everyone with its opening night triumph of fun and fabulous.

There is no doubt the festival will continue to contribute to the Tasmanian economy and growth. 48% of tickets sold were from outside Tasmania with a number of the events sold out and more that were close and could follow as the week progresses.