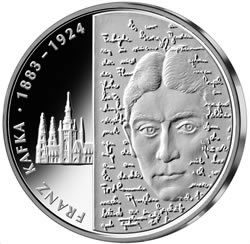 Franz Kafka wrote "white was black and black was white.''

The Bodleian Libraries at Oxford in England have announced that in addition to their main autumn exhibition Treasures of the Bodleian, the newly acquired letters of renowned Czech author Franz Kafka (1883 – 1924) to his favourite sister Ottla, who died in the death camp at Auschwitz during World War II, are on public display for the first time.

Richard Ovenden, Deputy Librarian, Bodleian Libraries said – ‘Following the joint acquisition of Franz Kafka’s letters to his sister Ottla in April, we are delighted to organize the first Oxford events in a series of joint program of exchanges of academic fellows and exhibitions, as well as other research activities related to Kafka and beyond between the Bodleian Libraries, University of Oxford and the Deutsches Literaturarchiv in Marbach.’ 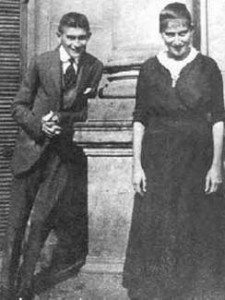 “I have powerfully assumed the negativity of my times “

Born in Prague to German speaking Jewish parents the controversial social prophet Franz Kafka (1883-1924) was a modernist. He is considered today an influential author and one of the best writers of the 20th century. However his writing attracted very little, or no attention at all during his lifetime, except perhaps that of his friend and executor of his will, Max Brod. He completely ignored Kafka’s instructions to burn his letters, diaries and manuscripts when he died. What has come out of his interest and determination to see his friend’s works published, are the visions of a man caught up in a web of uncertainty and doubt. His anguish is plain, as he moves through the society and world of his time, often dislocated and disoriented like all the others dealing with an age of political ambivalence. He was branded a decadent and defeatist when the Communists seized power in Czechoslovakia in 1948. This meant that his writings were denounced and suppressed in his homeland. Following the brief political and artistic flowering known as the Prague Spring, Franz Kafka was once again published and today a Museum at Prague celebrates his life. 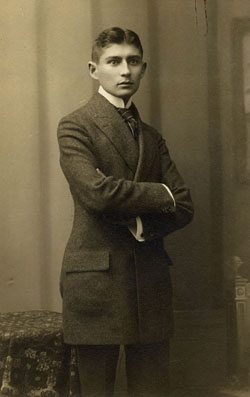 “Theoretically there is a perfect possibility of happiness: believing in the indestructible element in oneself and not striving towards it”

The Liebe Ottla Exhibition at the Bodleian Library at Oxford celebrates the letters’ acquisition in partnership with the Deutsches Literaturarchiv at Marbach. This is a pioneering collaboration between two important cultural institutions, which jointly bought the letters in April 2011. The exhibition includes eighteen letters, ten postcards and picture-postcards revealing the close relationship Kafka had with his favourite sister, Ottla, the youngest of his three sisters and the family member to whom he was closest.

In a letter dated 4 July 1918, on display in the exhibition, Kafka states how well he and his sister understand each other: ‘in fact we do live or I live with you better than with anybody else’.

“By believing passionately in something that still does not exist, we create it”

Franz Kafka ended up creating his own legend by cultivating his own insignificance. He grew up in that era in Europe from c1890 to 1914 now generally known le Belle Époque, when France and its European neighbours were at peace with each other. t was a period where art, design and romantic stories flourished and music became accessible to a wider audience than ever before. The invention of the gramophone ensured that lovely melodies and romantic songs performed in the intimacy of a Salon could be recorded. At Paris the Cabaret and Can Can thrived and impressionism, a new style of painting whose deft brushstrokes and vibrant colours emphasised light in all its changing qualities, thrived. Above all it was a time of political contrasts when vive la differénce had not become a celebration of life. Working class militancy and organized socialist movements were actively built on the ideals of liberty, equality and fraternity. They contrasted with the reality of intense systematic discrimination of people and their belief systems and between the sexes. Enormous suspicion surrounded other cultures and yet it is still so often referred to as a ‘golden age’. 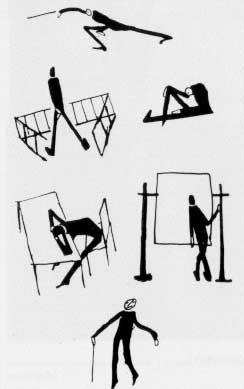 As a Jew in his challenging modern world, Kafka suffered many torments, His dreadful death aged 40 from the effects of tuberculosis and starvation, due to lack of medical options, was as tragic as much of his writing. While it often addresses broad cosmopolitan themes it is also contemplative, displaying the anguish, terror, persecution and grim reality of his times. Most of the pieces on display are in Kafka’s own handwriting and some contain drawings by his hand. The correspondence gives an insight into Kafka’s life, his travel and everyday life, as much as they sketch a portrait of Ottla and the struggles of women of her position. The exhibition also features highlights from the main Kafka collection in the Bodleian: the autograph of Die Verwandlung, (The Metamorphosis) 1912; Kafka’s first novel Der Verschollene (The Man Who Disappeared), and Das Schloss (The Castle). 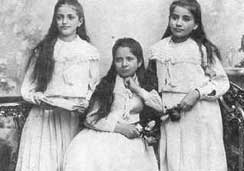 Franz Kafka's sisters, all of whom died in Nazi extermination camps

The Bodleian Libraries will also celebrate the acquisition with a series of events held in the Sheldonian Theatre on 24 October:
16.15  Reading of Act I, Scene I from Alan Bennett’s play Kafka’s Dick
16.30  Kafka’s Writings: Private Confessions or Public Property? Lecture by Ritchie Robertson, Taylor Professor of the German Language and Literature, University of Oxford
17.00  Panel discussion chaired by Katrin Kohl, Professor of German Literature, University of Oxford

All Quotes by Franz Kafka

NOËL! NOËL! 2017 is a concert full of pathos and one of the best to date by the ABO… beg, borrow, rush and grab tickets Sydneysiders, your time is still ahead