Through the clear realms of azure drift
And on the hillside I can see
The villages of Imari…. 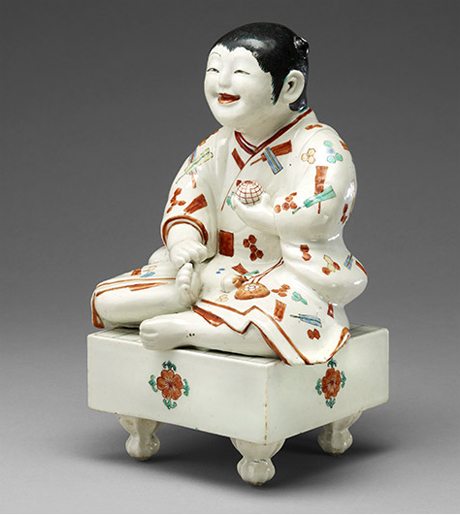 It was in Arita in the ‘Street of the Coloured Decorators’ that the ceramic worker Sakaida Kizaemon (1596-1666) introduced Chinese technique of overglazed enamels to the existing ceramic kilns where the porcelain made primarily during the Tokugawa period (1603 – 1867) would be produced. A Chinese specialist in adjacent Nagasaki had let him in on the secret, a discovery that helped Arita to become famous for producing some of the most exquisite porcelain for export to the Europe and the Middle East.

The ongoing Asahi Shimbun Display at The British Museum is sponsored by the Asahi Shimbun Company of Japan, which produces books, magazines and one of its most prestigious newspapers. It offers opportunities around the world for visitors to encounter extraordinary items from times and cultures that may not be very familiar.

Their next showcase now on display until 21 August 2016 at The British Museum will enable exploration of a 3D scan of a piece of Kakiemon porcelain and a view of the production process in the now famous Kakiemon kiln.

They will share knowledge about the ancient ceramics town of Arita located on Kyushu Island in Southern Japan, through shared stories about the production and success of Kakiemon, Nabeshima and Imaemon porcelains. The year 1657 is significant, because this is when the Dutch trade with the Chinese came to a complete standstill as the failing Ming dynasty succumbed to the rule of the Manchus.The Dutch East India Company then began searching about for new market sources and it turned to Japan and the factories of Arita via the port of Imari from where in 1659 they shipped their first cargoes of Japanese porcelain to the west.

Japan might have been late coming to the production of porcelain, but it quickly made up for lost time. The benevolent Tang dynasty of China whose monarchs reigned between 618 and 906 had provided stable government enabling both cultural and artistic development. Izumiyama Quarry that supplies porcelain stone to the Arita potters

This in turn motivated the growth of their ceramic industry and the expansion of their economy through trade and in the streets of (Chang’an) the capital, envoys, clerics and merchants from all over the eastern world, including India, Persia, Arabia, Syria, Korea and Japan were all recorded as being busy trading.

The years surrounding the fall of the Ming dynasty in China in 1644 and the founding of the new Qing dynasty were uncertain, which also in turn meant that foreign trade with England, and other countries in Europe suffered.

At first the wares shipped internationally were mainly blue and white wares for the Arabian and Indian markets with a smaller quantity for Europe and England, which would have a big impact. Much of the success of the Meissen porcelain factory during the eighteenth century where they copied the palette of colours used by Japanese potter Kakiemon Sakaida and the rest is history.

Characteristic colours produced included iron red, light blue, bluish green, and yellow and Potter Sakaida Kizaemon was given the title Kakiemon 1, which derived from the all-new persimmon or orangey-red colour that became the highlight of his work.

Since his day the succession of the head potter at the Kakiemon kiln has been based on the principle of iemoto, meaning the eldest son inheriting and sustaining the brand and workshop, a big responsibility.

Sakaida Kizaemon’s inheritance is today in the hands of Sakaida Kakiemon XV (b. 1968) and he will be overseeing the celebration of 400 years of porcelain manufacture in Arita in 2016.

Nabeshima founded some 20 years after the first Japanese ceramic production by the Saga Nabeshima clan was first founded feudal clan kiln in Iwatanigawachi in Saga prefecture. In 1661, it moved to the Mt. Minamikawahara to learn the painting technique accomplished by SAKAIDA Kakiemon in 1641 at his nearby kiln. After thirteen years, In 1675, it moved again to the Mt. Okawachi and settled until its feudal clans were abolished in 1871. The Imaizumi Imaemon family began manufacturing coloured porcelain in 1644, also in Arita, as tributes to be given to the traditional Shogunate family as well as gifts to the nobility. Its head potter has also passed the technicques and glazes they developed down through the family until today.

The Asahi Shimbun Display Made in Japan: Kakiemon and 400 years of porcelain by presenting extraordinary items from times and cultures that may not be very familiar.

Kakiemon and 400 years of Porcelain

The Asahi Shimbun Displays are a series of regularly changing displays, which look at objects in new or different ways.

Sometimes the display highlights a well-known item, sometimes it surprises the audience with extraordinary items from times and cultures that may not be very familiar. This is also an opportunity for the Museum to learn how it can improve its larger exhibitions and permanent gallery displays.

The exhibition Dulka Warngiid – Land of All, showcases works by artist Mirdidingkingathi Juwarnda Sally Gabori, an enduring cultural legacy for all Australians