They dined on mince and slices of quince, which they ate with a runcible spoon* Last year when I was in Sydney for the opening night of the Australian Antique & Art Dealers Association Show one of my favourite items on view was The Alpaca’s Tea Party from Bendigo based artist Kate Bergin’s Wild Things Collection, whose works were available from the Mossgreen Gallery at Melbourne. Managing Director Paul Sumner was on the stand and was very pleased at people’s reaction to her work.  I just loved and responded to her pathos, wit and humour. Sumner has reported that at the recent Melbourne Art Fair 2012 Kate Bergin’s current exhibition, Strange Relations, completely sold out. It’s little wonder. After years of angry and aggressive art people are responding positively to the beauty and humour coming back into works they want to hang on their walls. Times of adversity and difficulty is the right time to make light of our load and enjoy the simple pleasures of life and great art. It should inspire and excite us.

Kate Bergin’s current and most delightful images, feature a range of exotic, and fabulous fauna playing with her fabulous collection of ‘runcible spoons‘, while balancing decorously on a crumpled, but clothed dining table. Culinary and charm collide. They certainly capture the imagination, invoking an atmosphere of both joy and delight. Her Royal Gala Performance is high on my list of being highly entertaining, much like English author Edward Lear’s wonderful nonsense rhymes of which the word ‘runcible’ was his own fabulous invention. Then there is Vanity Fair, where a flock of fantastic flamingos look elegantly down on those below. It’s hard not to like the panda with a pelican on his back, or the fox and the owls proving that they are both cunning and wise. Tjhe bevvy of black swans are finding it hard to keep others, including some very angry penguins from trespassing, while Mr Percival the pelican is telling all his furry friends to hop onto the bakelite number and tell some simply fabulous feather-raising stories. 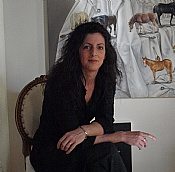 Since she completed an art history study tour of Europe 1990 – 1991 and graduated from the Victorian College of the Arts in 1992, Kate Bergin (1968-) has gone from strength to strength. She now has an impressive array of exhibitions behind her, as well as a mounting pile of awards and prizes.  One award in 1995 was for design in a Victorian Tapestry Workshop. One of her feats was being a Sulman Prize finalist at the Art Gallery of NSW in 1995 where she won the People’s Choice Award. Australian iconic artist Margaret Olley thought the work special, because in that same year she gifted it to the Art Gallery of NSW.

Since then Kate Bergin has shown all over the country, Qld, NSW, Victoria, W.A., S.A., in town, out of town, on the Gold Coast and at the Bendigo Art Gallery, which today is attracting some very stylish exhibitions both nationally and internationally. In 2011 she was again a Sulman Prize finalist with her wonderful work the Spoon Collectors, hopefully she will detail some ‘sporks’ soon. Or maybe, just maybe, she may also feature the Quangle Wangle wearing his Beaver Hat! 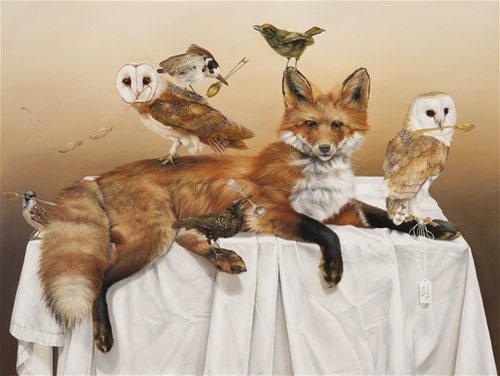 The Cunning and the Wise by Kate Bergin, courtesy of the Artist and Mossgreen Gallery, Melbourne - Strange Relations Sold Out

This is not an easy country to gain a reputation as an artist, while building a body of work with integrity that reflects your talent and diversity. Making enough money to ensure that your passion is not perverted, and also to live is hard enough. Those artists who do make the grade however are gathered up and feted, as this girl certainly deserves to be. Quirky will not bring about as much fame as quickly as controversy, but it helps. What it will boil down to though in the end is to achieve success aritsts need to reflect the current trends in world opinion, or life, provide a focus on the things that people are passionate about, and prove their dexterity and skill with brush and paint. If they do then they are in with half a chance.

Kate Bergin’s current menagerie, just like the rest of us, are hell bent on staying on the path to preservation. When she won the Art Prize in 2010 for the City of Albany, ironically Kate Bergin’s work was called “Call of the Highly Improbable”, which was cleverly acquired by the city of Albany for its own Australian contemporary art collection. 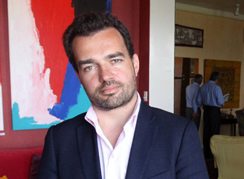 Paul Sumner, the Managing Director of Mossgreen Gallery and Mossgreen Auctions at South Yarra in Melbourne, who champions Kate and his talented team of artists work, certainly combines flexibility with commercial realism and resilience.

Surviving the challenges and rigours of the tough Australian market well, Sumner is no newcomer to the trade, having grown up surrounded by the world of art and antiques with his parents both involved.

Educated in a heady soaring cathedral environment at Bristol, he began his work experience in the trade by being part of a removals team delivering art and antiques from an auction room at Bath in England. He came to Australia as a young man for a decade or so, working at both Christies and Sotheby’. He then went back to England where he gathered invaluable experience as Managing Director of Sotheby’s London for over seven years. He has worked hard to establish his operation and reputation at Melbourne since returning from London in 2004, specializing in single-owner auctions and supporting local artists.

Mossgreen Gallery and Mossgreen Auctions now has an experienced team that have all been honed by hard work and experience.

Sumner advocates for improving co-operation and collaboration between all sectors of the Australian art market to help with its expansion. He wants to expand his own gallery business on the back of significant growth, a wealth of experience and a whole new generation of Australian artists who contribute to the very exciting Australian art market scene.

The current ArtMarket Report, a subscription magazine out of Sydney is providing a great deal of essential information on emerging global markets. Over the past decade it has grown into a meaty magazine full of interesting news and advice for both connoisseurs and collectors, as well as those simply wanting to learn more about the contemporary Australian Art Scene. Its expanded its reach into Asia and Internationally, with reports on the Hong Kong Art Fair and Paris Culture guided by its savvy editor Alison Harper. This month it features an article about Paul Sumner and his business acumen.

The success that Paul Sumner had with the Ann Lewis Auction held at Sydney in 2011, in the August surroundings of the Art Gallery of NSW, has provided impetus for the firm in moving forward. When he holds auctions in Sydney now, as he does now for 50 % of his clients, he brings a huge Melbourne data base along with him, that his clients must love him for. Seeing as this is renowned as the town that embraces art on every level. 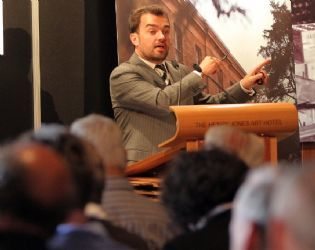 Sumner’s success with conducting auctions of Chinese art and antiques in Melbourne has been proven time and time again. Ray Tregaskis the Asian Art Specialist at Mossgreen has had a lot to do with that. He’s part of a team of experts on retainer in a smart business model that has seen the team through thick and thin to soaring success.

The next major collections Mossgreen Auctions will be handling are the Lisa Ho Collection and the Collection of Peter and Divonne Holmes a Court, which will take place on 19th August at Sydney when busy day should be had by all.

The Collection of Ross and Rona Clarke, which features fine Australian art and exceptional indigenous artworks, will be held at Brisbane on the 9th September, as Paul Sumner and his team take on the national ‘east coast’ scene. The next Fine Chinese and Asian Art auction will be in November. 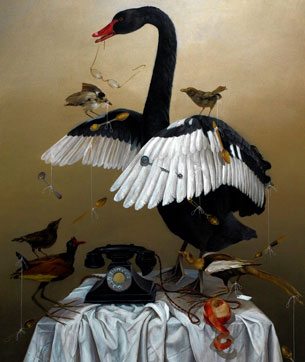 The Mossgreen gallery space in South Yarra at Melbourne has a cafe, providing a relaxing atmosphere for clients and customers to enjoy while they contemplate their choices from an outstanding array of artists.

Those represented at Mossgreen Gallery include

If you haven’t yet considered entering the Australian contemporary art scene, there is no time like the present. Perhaps we have reached a point where huberis has ended, hope has begun and a bit more tongue in cheek humour will help to fuel the future. What a wonderful prospect.

Do keep an eye out for Kate Bergin’s next collection, which we can all hope will be coming soon. It’s so truly wonderful to see an artist fulfilling her potential and passion, while bringing forth great joy to many people. Well done Kate!

*Edward Lear, The Owl and the Pussycat 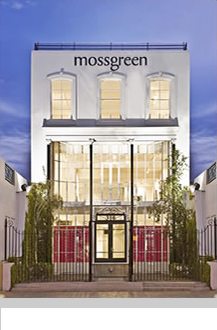 For those wishing to know more about the world of art there is an informative and eclectic range of arts magazines, including international Auction and art catalogues, current Mossgreen catalogues, and national and International Arts newspapers and Antiques trade gazettes to bring everyone up to speed on what’s going on in the world wide Art world. Charity Auctions
Paul Sumner has conducted over 230 charity auctions for various charitable causes in Melbourne, Sydney and London and is available without charge for registered charities under certain conditions.