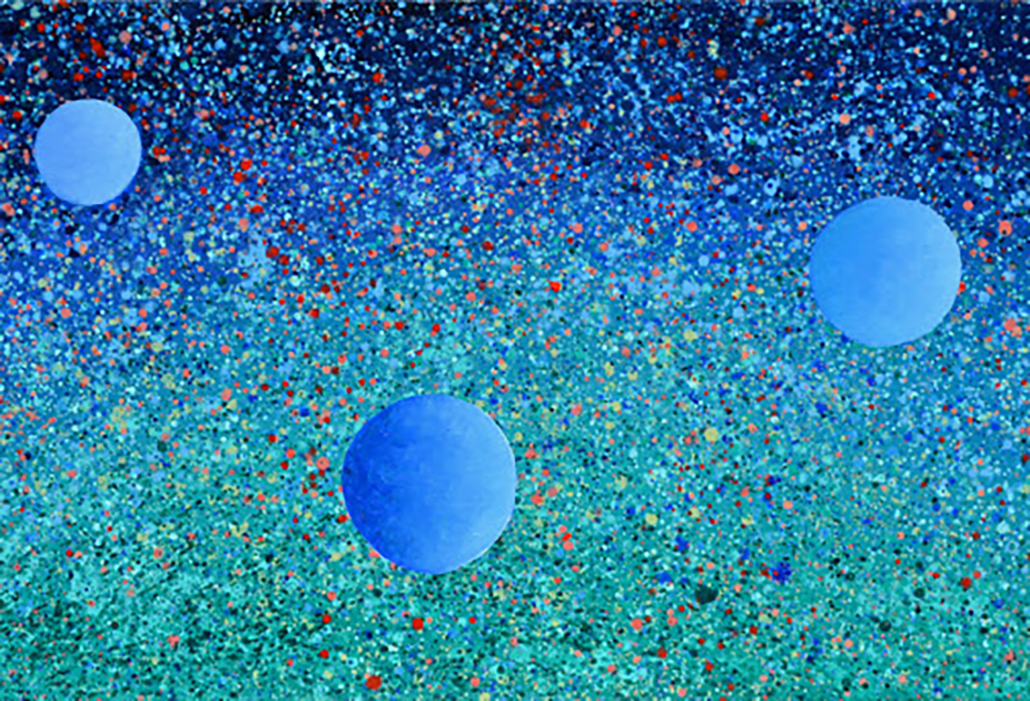 Throughout the centuries there are in the grand scheme of things, but a handful of images in art history since the so-called rebirth of humanity or Renaissance in 15th century Italy, connected to the heavens and the stars.

This is despite us knowing now the ancient Egyptians endeavouring to interpret the ‘will of the gods’, actively practiced astronomy and left visual records about their discoveries on the ceilings and walls of the tombs of their pharaohs. 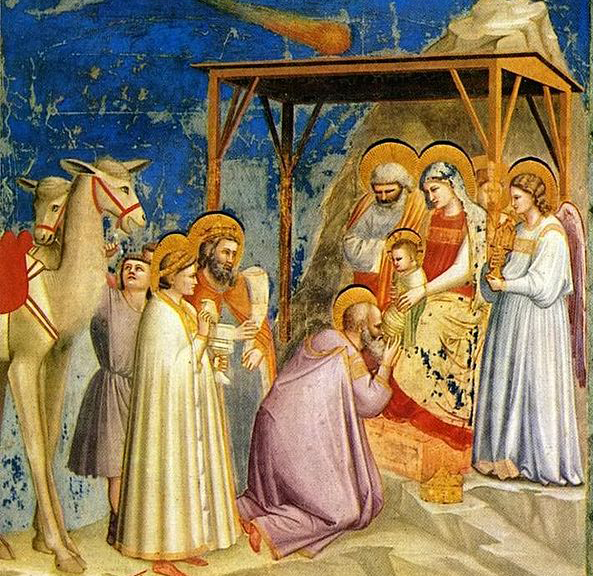 In art history it was c1304 when Italian artist Giotto di Bondone (11266-76 – 1337) heralded the beginning of the period of Renaissance style in art, which eventually helped to kick-start the modern age.

He recorded his Adoration of the Magi against the background of the night sky in which a comet is seen to be blazing a trail (thought to be Hally’s Comet 1301) above the scene depicting the birth of the Christ child. 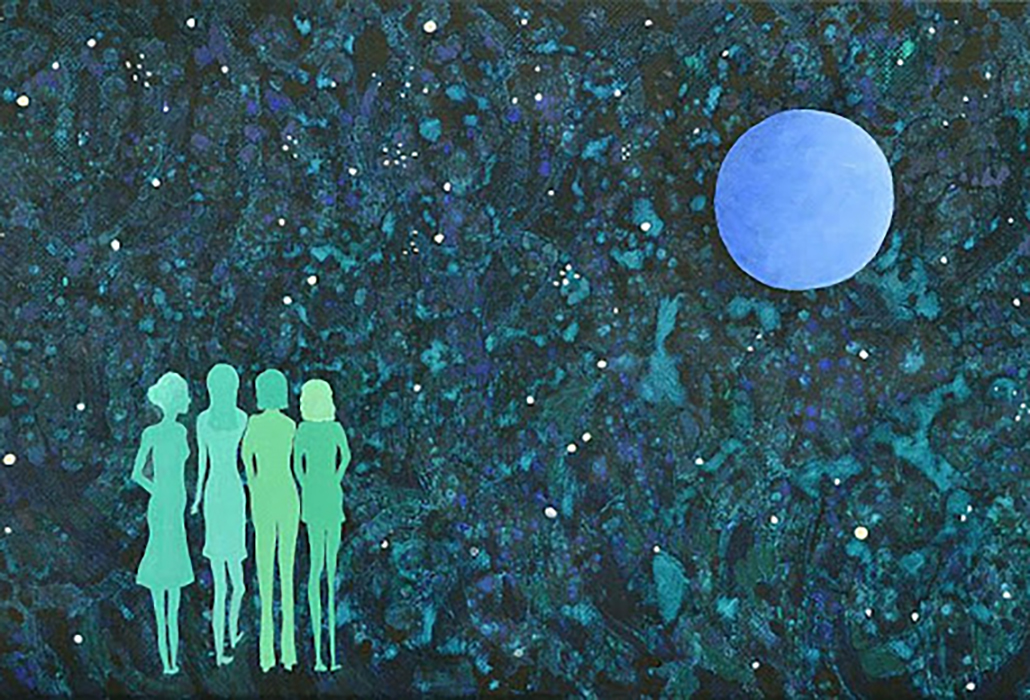 Most of us who grew up after World War II during the twentieth century, looked up in awe and wonder toward the heavens at night, as many people with the world at peace, actively worked towards unravelling the mysteries of the universe.

At first as children we were captivated by the light gleaming from the ‘silvery’ moon in all of its different phases, as well as the twinkling and movement of the stars, especially when one left its trail as it entered its death throws against the background of the inky night sky.

When at night the full moon would appear hovering above the horizon at the seaside I lived nearby to, we would all go for an adventurous night time walk down to the beach, where we would sit on the rocks and watch it as it seemingly sunk into the sea. It was always mesmerizing When astronaut Neil Armstrong on July 20, 1969, took one giant leap for mankind, stepping down onto the moon and changing the face of earth history, the universe gained a heightened intensity of focus.

Not many of us however were in a position to take that fascination with other worlds and to the heavens above into our adult lives as we faced up to the reality of living life on earth. For some however, it became a passionate pursuit.

They began to fantasise a lot more, from time to time, at what it may be like especially at the movies starting in the 30’s and perhaps reaching their first peak with the original Star Wars movie trilogy following on from the TV series Star Trek. In popular depictions whatever happened was only limited by the breadth of human imagination. 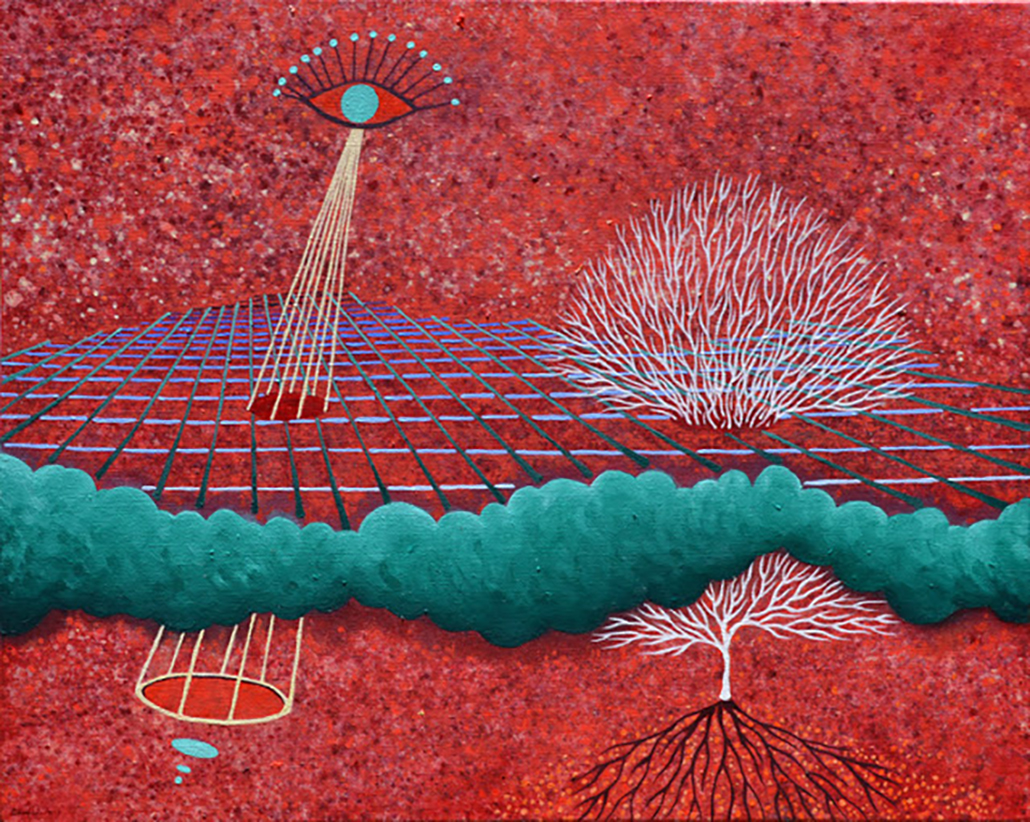 Since then there has been a slowly growing emphasis on Astronomical Art, with this all new genre gaining in popularity, boosted perhaps by numerous influences from these other creatives and the rapid advancement of science and technology.

During the last decade clever scientists with the ability to communicate difficult concepts about the universe to all the rest of us mere mortals, such as Brian Cox in England and Alan Duffy in Australia, have renewed our fascination.

Today we are now unravelling the mysteries of the universe seemingly at a much faster rate, encouraging communication through conversation and exhibitions on a global basis. 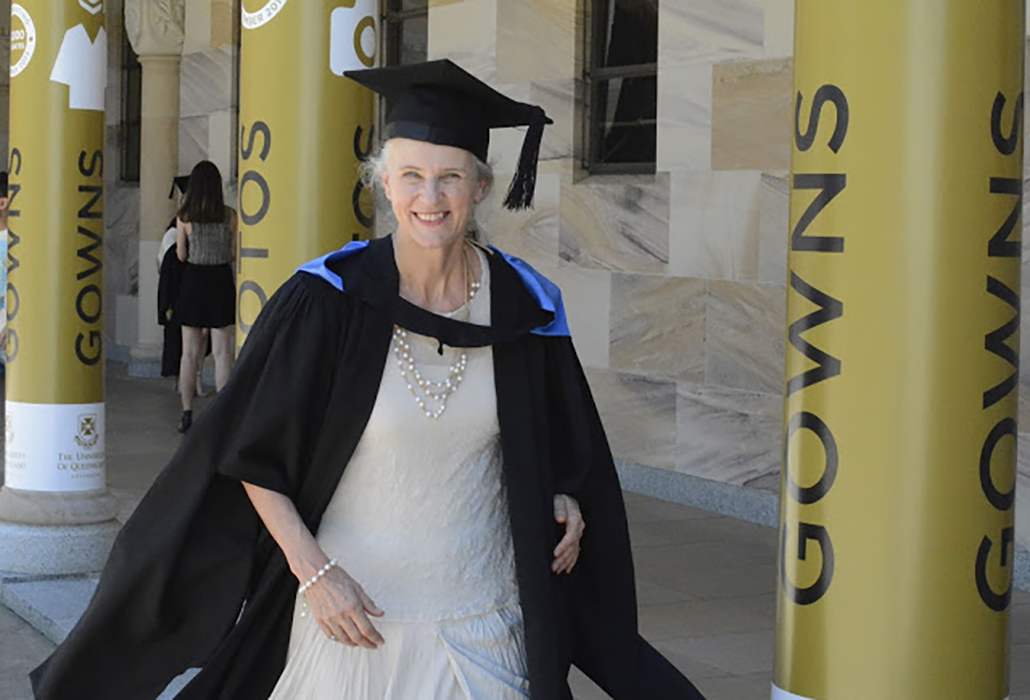 Australian artist Kathryn Brimblecombe-Fox, has in recent years used her passion for cosmic dreaming to create paintings, which for her ensures the ‘cosmic perspective’ prevails.

She says…. this affords an opportunity to ‘see’ the creeping colonisation of signals across landscape, sky, and space.

Kathryn not only produces great works of visual art on canvas, but she also lectures, writes and is actively engaged in cosmic concerns in conversations at a high level going forward. 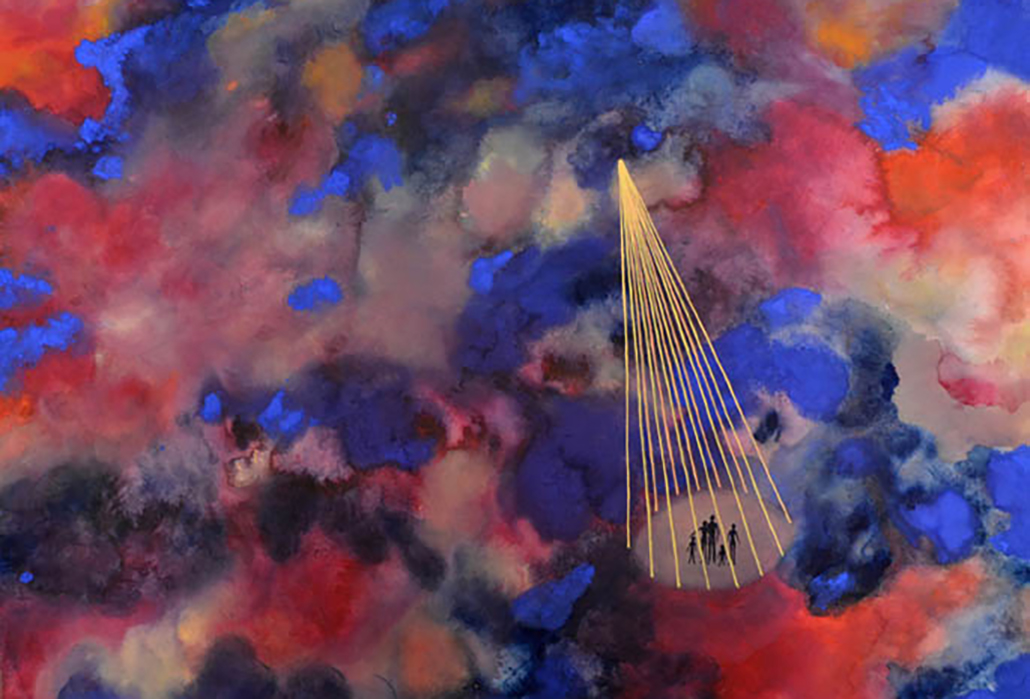 In April, 2018 she is ‘…presenting a talk about my paintings depicting militarized drones, or indications of their presence, at the International Studies Association annual conference, San Francisco. I have also been asked to be part of a panel discussing “War Art: Museums, Militarisation and Militantism”. 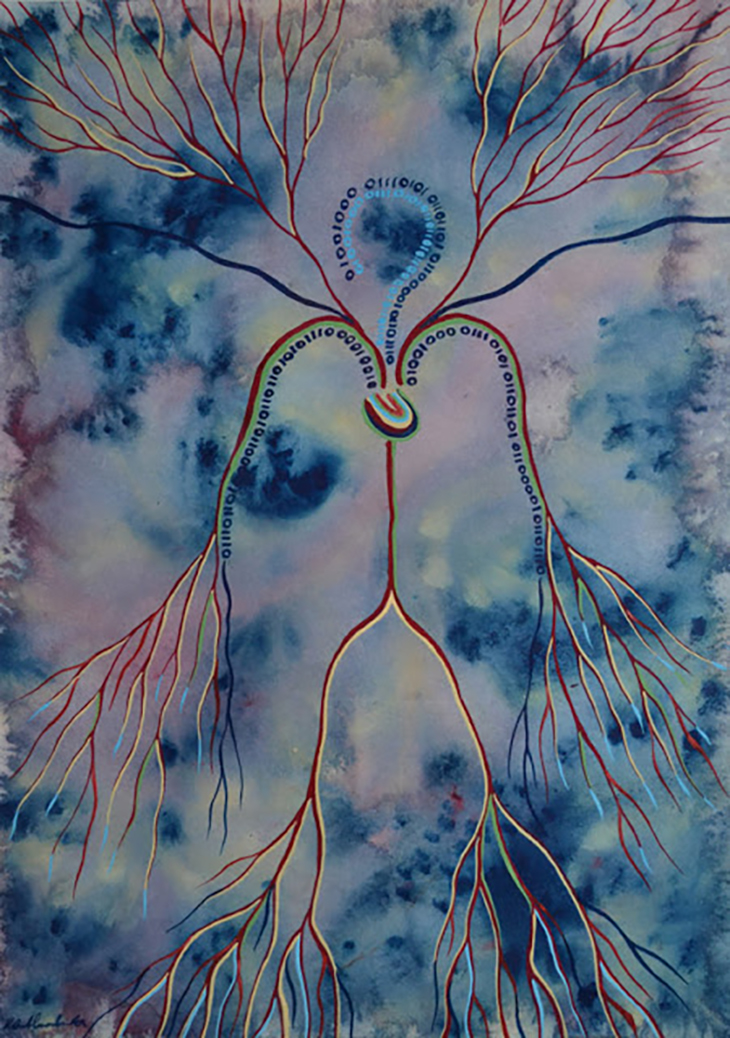 After that she’s off to New York for meetings at Bard College who have recently published her ‘Drone Year in Review 2017’, where she will talk at the Center for the Study of the Drone.

Then she’s onto London to where she has been asked to make a presentation about her dronescape paintings at Goldsmiths, the University of London..

Her next physical exhibition of her paintings in Australia will be Cosmological Landscapes at Dogwood Crossing, Miles in Queensland, opening Thursday 29 March – 22 May, 2018.

Cosmological Landscapes will be showcasing Kathryn’s concepts of landscape in an age where space and cosmological research are revealing more about the Earth aided by ‘drones’, and its place in a universal environment.

Kathryn says ‘I think it is important to look at landscape with the new perspectives cosmic distance affords us. This is particularly so in a world where conflict, changes in climate and the fast-paced development of new technologies mediate how we relate to landscape, environment and to each other.’ 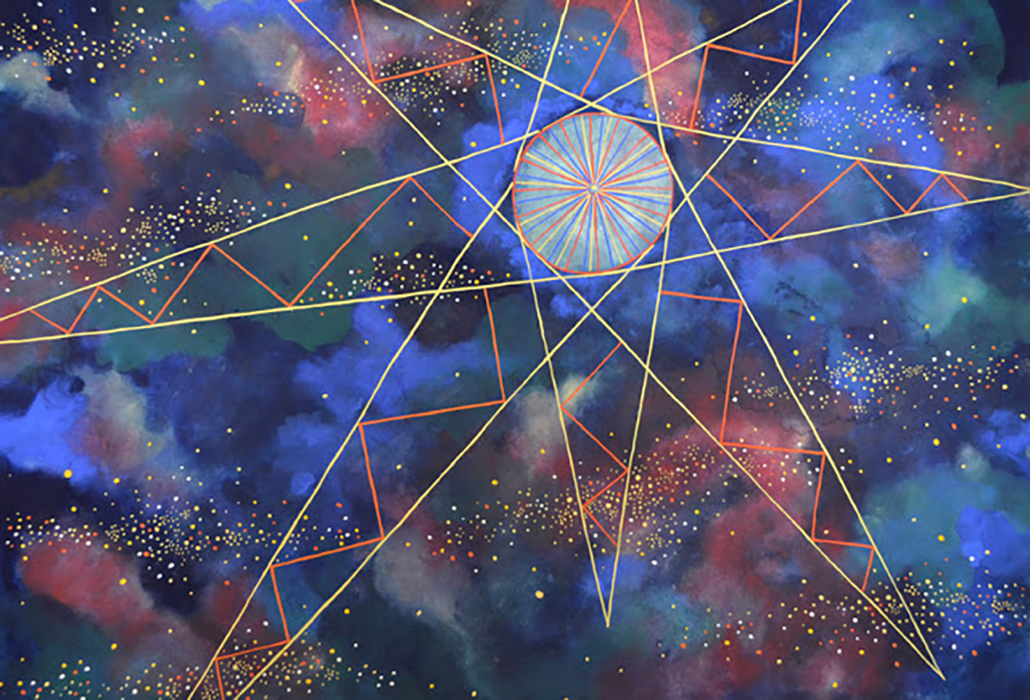 Landscapes, cosmic landscapes and Kathryn’s all new ‘dronescapes’ will be sure to create a lot of interest as science and technology begins to dominate as we move ever forwards towards the future.

She explains her works best with her own words; ‘… by taking roaming and cosmic perspectives, I attempt to demonstrate how movement and distance can help expose the invisible signals, and their networks, that enable contemporary surveillance and targeting capabilities. The figure of the airborne drone as a node-in-the-sky – rather than an eye-in-the-sky – is emblematic of this phenomenon’ 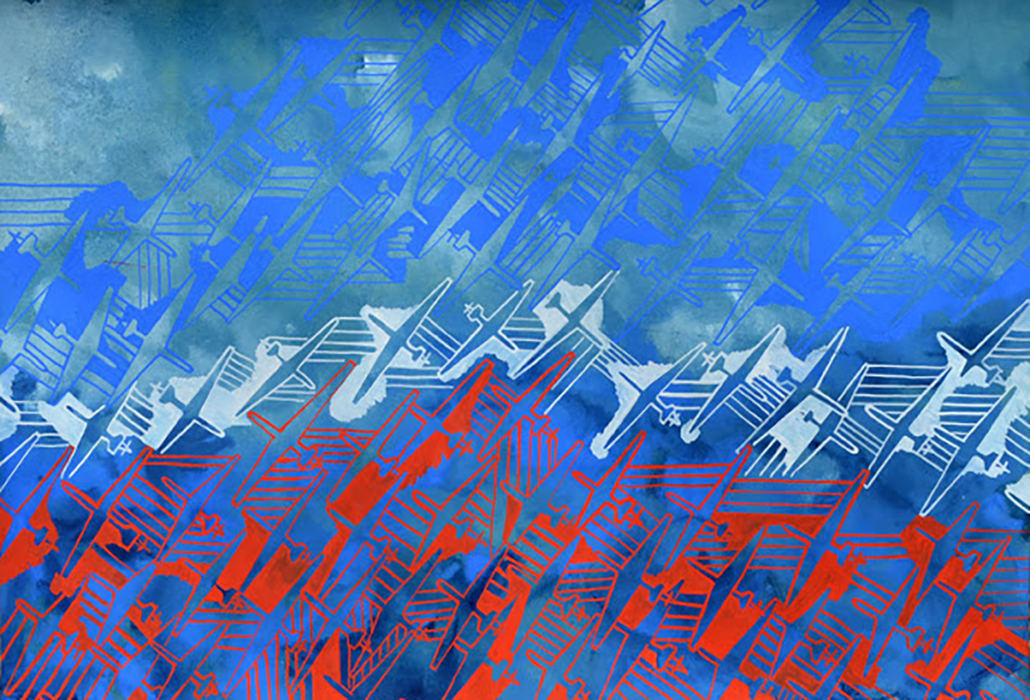 Her Droned Landscape ‘ she says …is a brutish painting, uncompromising in its visual proposition that the landscape and environment are changed – droned. It presents a possible new topographical layer imposed on the terrain and/or the sky. Alternatively, the viewer may be seeing a cross-section of a droned landscape, of land, horizon, and sky. If it is a cross-section, then the droning of landscape has infiltrated subterranean layers, as well as atmospheric layers’.

Katherine has an extensive BLOG in which she talks about her paintings in great detail, where you can expand your knowledge. 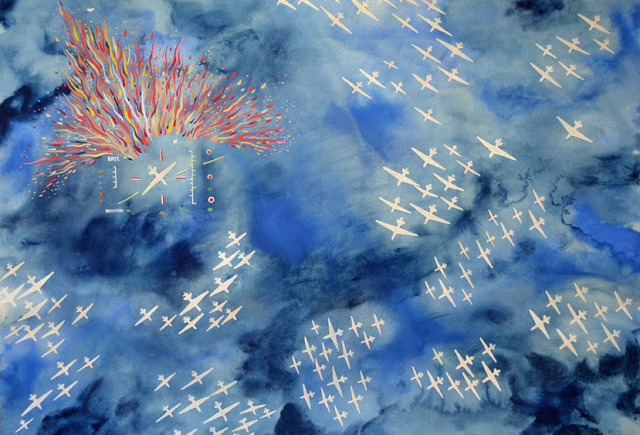 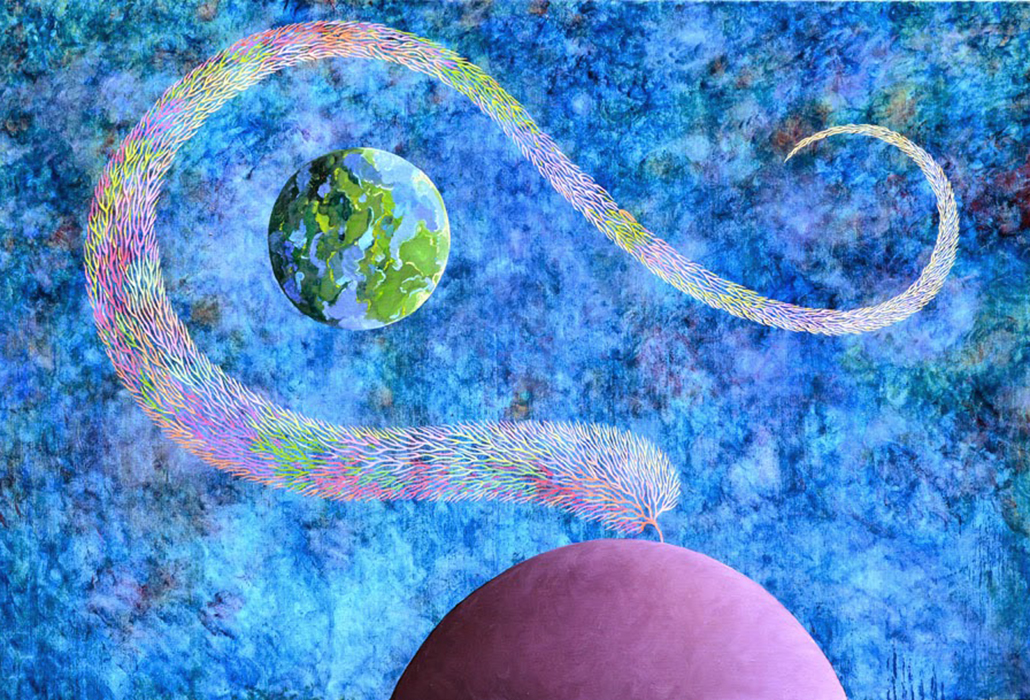