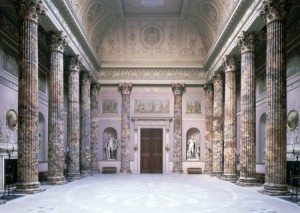 Two painters habitually employed by eighteenth century Scottish born English based architect Robert Adam (1728 – 1792) were Biagio Rebecca and Antonio Zucchi. They provided paintings inset into the Marble Hall at Kedleston, which he was renovating for Sir Nathaniel Curzon. Its design was based on ideas gleaned in Rome from the Pantheon, the only building surviving intact from Roman times, as well and other archaeological sites. Moving from one space to the other is a powerful experience. 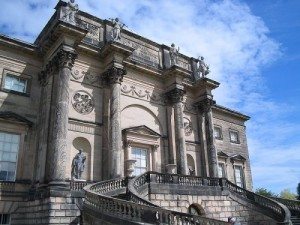 The Goddess Diana presides over the deer park and pleasure grounds which were the essential setting for such a great eighteenth century mansion. Robert Adam moved the scattered nearby village to a new site making way for ‘a natural landscape’ dotted with temples and garden buildings in the neo – classical taste. Landscape gardener William Emes worked under his influence, particularly in the layout of the pleasure grounds. Kedleston demonstrates the breadth of Robert Adam’s range as architect, garden designer and interior decorator. He was the whole package.