Stepping inside the Artarmon Galleries to view the diverse collection of Kilmeny Niland’s artworks was to be immersed in her watercolours depicting the world of animals and people with their idiosyncrasies, personality traits and physical quirks.

Kilmeny Niland (1950-2009) was a renowned Australian artist and illustrator, most widely acclaimed and loved for her children’s book illustrations.

She was involved in writing and or illustrating over thirty books.

She was the recipient of many awards, including receiving with her sister Deborah Niland the Visual Arts Board award in 1974 for illustrating Banjo Paterson’s Mulga Bill’s Bicycle.

This book remains a joy to children everywhere and is continuously being reprinted, it is a cherished Australian children’s classic. 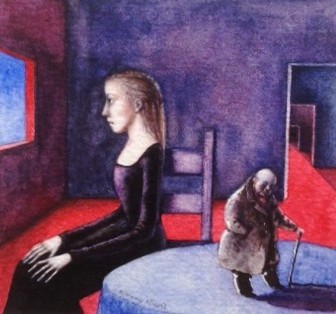 However she also worked in a very wide range of genres including graphic designer, artist, illustrator, cartoonist, animator and painter.

Kilmeny Niland was the daughter of Ruth Park and D’Arcy Niland and twin sister to Deborah Niland, a whirlpool of creative genes.

She was born in New Zealand and educated in Sydney later studying at the Julian Ashton Art School.

Artarmon Galleries located on the north shore of Sydney has been a major centre for Australian paintings and drawings since it was established in 1955.

This Australian tradition was continued in the current exhibition of Kilmeny Niland’s With the Animals.

This exhibition of ninety two works surveyed her artistic versatility, relished the delights of her sense of humour and revealed original narratives within her creations. Her affinity and passion with animals was palpable and her unequivocal ability to imbue her animal subjects with human personalities evoked a sense of wonder and playfulness.

The joy in her artworks was enchantingly captured in the illustrations for The Land and The Spirit (An Australian Alphabet) by Lydia Pender and Kilmeny Niland and several of the original artworks for the book were included in the show.

In Flying Fox (1992) a watercolour awash with lush vibrant green leaves that burst with life and the mystery of growth, were enclosed in a circle that pulsed with the cycle of life.

The flying fox hung blithely comforted and embraced by the placement of leaves.

The twisted branch meandered through the leaf arrangement and provided support and balance for the flying fox’s claws in their clutching position.

The expression on the animal’s face was one of unhurried abandonment and a shrewd contentment.

A wisdom that comes from vast experiences pervaded its facial features.

Kilmeny Niland’s ability to analyse strengths and weaknesses was sensitively manifested in the meticulously crafted and intuitive brush strokes that formed the animal’s expression and touched the heart of the viewer. The translucent folds of the skin covering the animal’s wings and the fragile bones beneath reflected her depth of research and attention to the painstaking execution of detail that was so evident in all of her work.

The vibrant colours of the birds in Lorikeets (1992) another illustration from The Land of the Spirit splendidly embraced the text.

“Look at the Lorikeets,
Chattering acrobats,
Dozens at once in the bottlebrush tree!
Clinging and wobbling
And feasting and squabbling,
Gaudy as clowns in a tumble of glee.”

The seven heads of the birds all tilted in different directions were firmly engrossed in the sequences of communication. The myriad tones of green, blue, red, orange and yellow of the feathers seethed with cheerful shades of optimism. The bird’s presence in the green bush and red bottle brush were assembled again in the splendour of a circle formation. Several feathers spontaneously floated outside the boundary of the circumference suggesting a fanciful freedom.

This watercolour was a glorious celebration of the bird world and Kilmeny Niland’s skill injected an enduring vitality into the illustration.

M was for the Magpie (1992) in the Book where the elegant bird flew over the cottage garden complete with fountain and angry cat below. The bird’s open beak and staring eyes suggested it was ready to pounce and laugh at the sport ahead.

The muted pastel hues of the garden, hedges and trees were softly contrasted with the solid salient lines of the black and white feathers of the magpie.

The translucent colours allowed the light to shine through producing a clean crisp and clear fluidity.

This watercolour was a fine example of Kilmeny Niland’s adroit understanding of patterning and applying it with finesse. She was very effective in creating a composition that captured the ambiguity a single scene.

A sense of the bizarre and the ridiculous was a feature of many of her artworks and the Colonial Tea Party (1992) was a charismatic and engaging example of this sensibility.

The grand foreground tea party was shared between four animal mates amid a background of Big Ben and the iconic red British double decker bus.

The warmth of company and the security of familiarity were evident in the characterisation of the animals. The joviality of sharing a cup of British brew slid across the impish grin of koala and the claws upheld in the Churchill victory signal by kangaroo and koala.

Dingo daintily reached across the table for a cup cake mimicking the gentility of a noble gentleman. A hilarious watercolour that must have given Kilmeny Niland many moments of laughter while she patiently concentrated on the endless details of the work.

The blue leaf pattern of the cups and teapot, and the matching blue edging on the white tablecloth enhanced the scene of the animals’ game of playing gentlemen.

This was a quizzical joyous composition that triggered a responsive broad smile on the viewer as the absurdity of the subject and the situation was observed.

Kilmeny Niland’s wide range of styles, subject matter and mood changes will be further explored next week in part two. The whimsical nature and subtle understandings of this enormous body of work was a heartening reminder of the rare talents of this extraordinary artist.

Kilmeny Niland
With the Animals

Egypt: Faith After The Pharaohs, an exhibition at the British Museum 29 October to 7 February 2016 presents the evolution of post-pharaonic Egypt to present day