The ‘Collection of Tompkins and Bush: Michael Jackson Wardrobe’ is set to go on tour of the UK as part of its schedule of exhibition events to be held in world centres. It will be then offered for sale on December 2, 2012 at the Julien’s Auctions Beverly Hills Gallery in Los Angeles in the USA. Michael Jackson (1958 – 2009) wore a splendid ceremonial black wool jacket embellished with a red armband, gold metal floral buttons, metallic embroidered crown patch at the chest and buckled leather straps at the right shoulder when he attended the 3rd annual Soul Train Awards in 1989. The jacket will be sure to attract special interest because it once adorned the man, who for much of his life never wore the same thing twice, and was feted and adored by millions of people world wide.

Introducing him on stage actress Elizabeth Taylor said that in her estimation he was the ‘King of Pop, Rock and Soul’. She and Eddie Murphy were presenting him with the Sammy Davis, Jr. Award and the 1989 Heritage Award, which were all about acknowledging and recognizing his great career achievement and contribution to the world of popular music. Michael Jackson singer-songwriter, musician, composer, arranger, dancer, choreographer, record producer, actor, businessman and importantly, a huge philanthropist, pioneered so much in his field, including his amazing ability to ‘moonwalk’. This was the momentous human movement that will forever be associated with his name. On the night he premiered the move on stage to his huge hit song Billie Jean in 1983 he wore one crystal glove on his right hand and it became an icon worn by an icon.

Like a King in his ‘court’ costume designers Dennis Tompkins and Michael Bush delivered Michael Jackson a whole new suit of clothes every morning to Neverland Ranch (1988 – 2005). This was when he was undisputed Pop Prince and the Peter Pan of the music world. Each item was an extension and reflection, of what increasingly became a more complex personality as his adult years advanced. 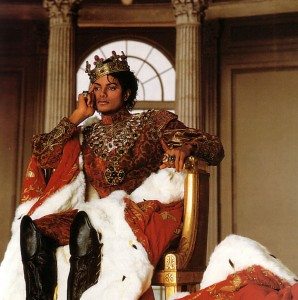 The striking costume he wore a the height of his career, cultivated the aesthetic of an international superstar trendsetter and helped to prove the power of threads in our society. Costume is all about who we are…where we have been and where we are going… it has become impossible for us to make a distinction today between styles that will last, trends that will grow and the passing fancies of a season.  Michael Jackson had an innate ability and vision to foretell, perhaps a bit like Steve Jobs did in the world of computers, what fans would want before they knew what they wanted and he maintained that ability and skill for well over two decades.

Then a great deal seemed to go horribly wrong in his world of celebrity, where so many people suspend reality, especially those advising and surrounding such a mega star as he was. Jackson as he got older seemed to descend into a place where truth and hope became lost, hidden in the murky muddy waters of fame.

In many ways Michael Jackson’s story reminds me of Alexander the Great, who also had to deal with being a legend in his own life time and his fate that of dying at an age when he should be enjoying life. At what seemed to be a positive turning point in his life, his dreadful death was indeed a tragedy. It will be released in October 2012 and is available in Australia through www.bookoffers.com.au

Taking us all ‘behind the seams’ it reveals, in accordance with Michael Jackson’s wishes, his extraordinary range of costumes: apparel, shoes, gloves, jewelry and hats.

He probably influenced more fashion trends than anyone in the ’80s outside of Madonna. His stylishness and inventiveness coincided with the dawn of music videos and MTV put both music videos and Jackson’s style on the icon map.

Michael Jackson became an important pop music icon in the life of my three sons when they were growing up. Our whole family admired the penultimate professional that he was, at least in terms of his outstanding musical career.

We could not help but admire the way he paid extraordinary detail to showcasing his style and the dedication and commitment he applied in always getting the details right. It was a very high standard of professionalism that he fought and strove to achieve on every level of his musical life.

In that regard at least, he was a role model for his generation.

When his album Thriller hit the streets in 1982 my eldest son was 14 and I remember us all crowding around the Television to watch excerpts from the video clip and then rushing out to secure the album. I think he still has it stashed away among his ‘vinyl’ collection, I must remember to ask.

Just the production of this one album of genius helped to break down the final ‘racial barriers’ and prejudices that existed and he helped to influence and transform both the society and the culture of his time. He won literally hundreds of awards including ‘Artist of the Century’ and sold an estimated 750 million + records, which is an amazing statistic.

He still holds the Guinness World Record for having supported the most charities of any pop star, and for echoing their themes in some of his most notable songs.

Jackson was involved in every stage of the production of his amazing music, videos and the costumes he wore, which extended all the way down to the buttons and fastenings on every piece of clothing including the battery powered lights that served to illuminate his person and his genius.

His vests were made with silk from India and elaborate jacquard designs from Europe with faux reptile fabric from downtown Los Angeles providing a local touch.

He loved the ‘military’ or a ‘regimented’ look because they were tailored with clean lines, much like ‘dance’ clothes his designers once reported. They were made from wool, silk, canvas, nylon, silver, gold, British regalia, police badges and even car parts.

They made a jacket for him with elements crafted from bonnet ornaments, and another festooned with badges from European racing car clubs. I just love that his ‘dinner jacket’ was hung with knives, forks and spoons, which reflected not only his innate sense of humour but also an important aspect of his humanity.

Bush and Tompkins created all his marvelous outfits by using a custom made clothes ‘dummy’ or mannequin, and every day was a challenge to come up with something he would approve.

His costume had a huge impact on fashion, cultural and societal development during the 1970’s and 80’s and Tompkins and Bush created all those on view and for sale. 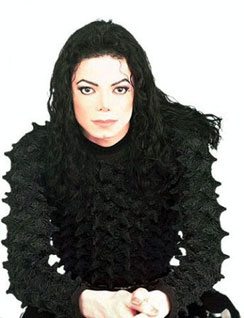 Sale highlights will include the 30th Anniversary of Madison Square Garden show signed prototype helmet, which was wired to illuminate a row of battery powered lights below the visor.

The helmet is signed in black marker to designer Michael Bush and states “To Bush Love Michael Jackson,”.

Then there is Jackson’s “Scream” video costume. This includes a pair of black spandex pants with matching long sleeve shirt and mesh tuck strap.

Each costume piece is marked on the interior in gold marker “2/2” or “2/2 M.J.J,” indicating that two costumes were created for Jackson’s famous video shoot. He received awards for his single and video for a ‘Man in the Mirror’, which highlighted the plight of those marginalized by society. He was without doubt an incredible philanthropist, giving without any thought that he should receive anything but the knowledge that he had helped others who were not as fortunate as himself.

Michael Jackson used a mirror well; as a metaphor for eye-catching deception in that he allowed us to see only what he wanted us to see.

A mirror in the history of art is the ‘matrix of the symbolic’ and accompanies the human quest to know and understand our identity. In Ancient Greece looking at one’s reflection could mean the losing of one’s soul, and the ancients put forward all sorts of hypotheses concerning the formation of images. Michael Jackson died in awful circumstances on the 25th June 2009.

This Michael Jackson Exhibition has toured internationally to County Kildare in Ireland, to London in the UK, Tokyo in Japan and Chile in South America.

However Australian fans will sadly miss out, perhaps they think there is not enough of them here. However I do have first hand knowledge of how highly he was regarded by many.

From early in the morning on June 27th I was in the Queen Street Mall at Brisbane, where my team was working on a huge community event The Big City Draw, which ran for 13 days as part of the Brisbane 150 celebrations.

People were drawing to live pop music in a number of areas, including on a massive canvas that we created on the Westpac Bank building wall with heavy duty cardboard.

During the course of the first few days it was covered in literally hundreds and hundreds of messages for and about Michael. His fans openly used it as a place to mourn his loss and we were glad we were able to oblige.

By the end of the event we had hundreds and hundreds of boards with words like ‘we love you Michael’ and other such messages all deeply etched upon them, some accompanied by wonderful drawings of the King of Pop. It was truly grief graffiti.

In the history of his art Michael Jackson will long be remembered and reign supreme through his costume, which documented his extraordinary life and was in accordance with his wishes.

Costume is a footnote to culture, and today remains both a changing and eternal form of human expression.

The ‘Collection of Tompkins and Bush: Michael Jackson Wardrobe

The fashion exhibit will continue touring throughout the remaining part of the year and culminate in an exclusive auction of the costumes and wardrobe at Julien’s Auctions, December 2, 2012. Visit www.juliensauctions.com for further details. 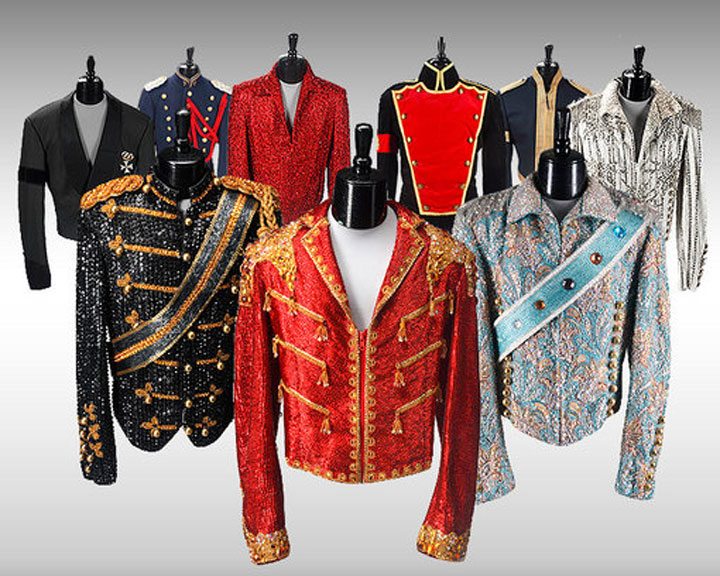 It is imperative humans re-learn how to think if we wish to achieve; thinking before acting must be the new black, so we can re-learn to plant a new apple tree