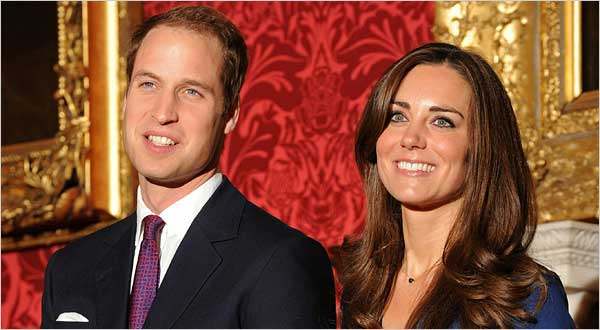 Well the world is agog this morning with the announcement that the favourite royal Prince, William, will finally marry the girl of his dreams after a long courtship.

Kate’s wait many believe is now over and she has finally nabbed her prince, but will she be a princess? It seems that Katherine, as she will now be known, will have to continue to play her waiting game if normal tradition and protocol is to be followed.

So what will Kate, now not waity be?

More than often the first son of a Prince of Wales is made a Duke, usually the Duke of Clarence, although that’s not completely set in stone.  With the title will come entitlements and responsibilities. It is not just royal window dressing.

As William has not been granted the title as yet, it may mean that for Christmas, or anytime in between now and their projected marriage in the Spring, the Queen will confer a ‘Duke’s title on William. This will make Katherine a Duchess when they marry next year. As she is essentially a ‘commoner’ this first step would seem the sensible way to go because it helps by giving her time to ease into a role that will eventually see her on the throne with William. But that is still a long way off. In between times she will need a great deal of training to become a royal, especially in protocol as she will now find herself representing Britain on the world stage as well. It is a huge responsibility for anyone born into the role, let alone someone who hasn’t. At 28 she will need now to learn and mature quickly as the newest member of a royal family. And, it seems that she will have all their support, which is a feather in her cap.

For any further advances on that role William and Katherine will need to wait for Charles to be King first.  Like his mother, the Queen, Charles would never step down once he is King. They have been born into royalty and real royalty just doesn’t act that way. If they do they are put aside as the former Duke and Duchess of Windsor’s would attest.

The Queen Mother would certainly have not approved of that course of action in any way shape or form and as they both respected her it simply would not happen in a family as traditional as the Windsors.

When you are a duly anointed King or Queen that position is not passed to anyone else until you have given up life on earth, except in extremely mitigating circumstances (such as being on life support or in a coma). Even then it would take an act through parliament.

So what that means is that Katherine, or Kate as she will remain affectionately known, will still be waiting. Although she will be enjoying some special privileges along the way. She will also be learning how to be a Duchess first and finally a Queen.

Whatever happens it is always good to see that romance and love is alive in the world. And it is wonderful that as a romantic he gave her his mother’s ring. They are both sure to become good role models for their generation.

In the meantime we can look forward to a media circus that will now be in play for decades to come. The wedding, well it is only phase one.

Catch up the Story William & Catherine, Wed at Last – From Romance to Reality