In France traditional smallholding farm practices are encouraged, including establishing good livestock and plant husbandry practices, with an emphasis on joie de vivre. The Charcuterie tradition of lightly smoked cured meats is an important aspect of the French way of life essential to their continuing health and wellbeing.

Charcuterie is generally made on a farm from animals raised on that single farm. Full circle farming is what published author, professional cook of 30+ years and teacher American born Kate Hill calls the process, that has seen the farmers in the Gascon region of France where she has lived since 1991, become efficient effective artisan butchers and producers of farmstead Charcuterie; bacon, ham, sausage, terrine, pâté, brawn and confit etc.

Kate Hill’s Kitchen-at-Camont in the countryside of south west France has become renowned internationally for its cooking and teaching classes on the art of Charcuterie.

The Gascon tradition is based on good farming, good cooking and good eating. For many people this idea is becoming integral to their own ‘new’ lifestyle as well, wherever they live in the world today.

Kate innovates her culinary delights in a 17th century farmhouse retreat complete with a tower catering to the medieval tradition of attracting fowl to milord’s table.

She works side by side with farmer butcher charcutier Dominique Chapolard and his wife Christiane.

They own a 100-acre family farm nearby to Kate where pigs are the primary herd. Together this passionate trio of friends will share their love for life Gascon style in Australia in Victoria 14 – 18 March 2014 at Jonai Farms.

Kate and the Chapolard’s will roll up their sleeves, tie on their aprons and share their skills in the age old craft of producing salt-cured Charcuterie via their French Pig: Farmstead Butchery and Charcuterie Workshops.

The culinary method they believe in has a holistic approach to farming methods; from farm to fork, from paddock to plate or as they say, from seed to sausage.

It is an important aspect of a whole new way of life being embraced by many more Australian families seeking to become stewards of the land by adopting ‘ethical’ farming methods including the Agrarian Kitchen, Tasmania.

They all aim to nurture the land for those who come after, while building a direct consumer-farm relationship today. Kate Hill and her friends don’t just cook haute cuisine in their chef’s whites, but they grow and buy seasonal produce from local farmers to make hearty Gascon food, based on traditional methods in her old stone Kitchen-at-Camont.

Kate said “I never realized when setting up my Butchery and Charcuterie program with the Chapolards in France how unique it was.

There are really no culinary programs teaching Butchery and Charcuterie today. The days of meat cutting schools and young apprenticeships are long gone.

At the Kitchen-at-Camont young adult and mid-career change students come from many different parts of the world looking for a hands-on experience … we hope to offer the basics and a clear over view of what is French Farmstead Charcuterie” said Kate.

Kate Hill and the Chapolards have a busy schedule while they are here. Over the past three years Kate has had many students from Australia at the Kitchen-at-Camont.

The Chapolard’s son is also currently in Sydney on a work exchange so they decided it was ‘a good conspiracy of opportunity and desire’ to come and enjoy a quick taste and look forward to meeting new students’. 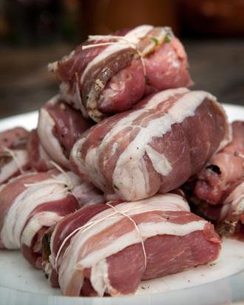 Kate will be making Paupiettes de Porc with Annie Smithers at du Fermier at Trentham Victoria, on Tuesday Mar 18th and has kindly provided the recipe for our friends and followers to download.

“It is an easy flexible pork roll that can be cooked in lot’s of different ways” said Kate.

They will also be making a prune and shallot Armagnac sauce to accompany the dish, which will be served with la cruchade- a Gascon polenta. Yum.

The French love nothing better than laying out a selection of Charcuterie with scrumptious fruit such as figs or delicacies like truffles, so that their guests have something to nibble on over a glass of wine at any time.

‘With her giant farm dog called Bacon, a trio of barn cats, a dozen chickens and a flock of ducks coming along behind her’, Kate Hill welcomes many eager culinary students and followers to her lifestyle in her part of the world, as well as whoever else happens to be stopping by. The pig is such a valuable tool for the small farm holder in France, because it’s such an efficient machine; able to prepare the soil for planting and to convert surplus and waste food into lean meat.

Kate and the Chapolards are holding their French Pig workshops down under in Oz to inform Australian chefs, cooks, butchers, farmers and home hobbyists about the merits and advantages of their system and how they can also embrace the holistic approach to producing Charcuterie for Australian consumption. The idea is to assist farmers understand how to work with slaughterhouse cooperatives, to share agricultural equipment and to also work with a viable community market system.

To achieve their goal they will start with outlining how they first grow the cereals, grains and seeds that are fed to their humanely slaughtered pigs.

Primary production is integral to a process that ultimately ensures the produce they sell is of high quality and selling the produce in a loyal local marketplace the final part of the equation.

The trio will also demonstrate and guide participants as they learn the skills necessary so that they can artfully butcher a farm-raised pig, make the preserved produce and then use it in innovative recipes.

In Victoria the Charcuterie workshops will take place at Jonai Farms and Meatsmiths, whose motto is ‘you are what you eat, so eat ethically’.

It’s sited on 69 acres of volcanic paddocks on the outskirts of the very picturesque former goldmining town of Daylesford in Victoria. Just like Kate Hill’s beautiful region of France (below), the stunning rich and beautiful countryside region of Victoria offers visitors the whole package. Jonai Farms is run by Tammi, Stuart, Oscar, Antigone and Atticus Jonas, who left their traditional suburban Melbourne environs behind in 2011 to become ‘ethicurian’ farmers. They raised rare breed large black pigs first, and then started adding to the mix which now includes grass fed beef, a diverse group of chooks and some rare ‘Lincoln’ sheep. They also added a Butcher shop to the farm in 2013 of which Tammi has recently become ‘Mistress of Meatsmithery’.

After packing their ‘heads and hearts full of book learning and knowledge, through practical experience on the job the Jonas family have in a very short time become an important aspect of a new group of farmers in Australia who seek to ‘ live on and with the land’, fast expanding the ‘ethical, biological farming movement’.

Participants attending the workshops at Jonai Farms can stay in Australian owned French style cottages nearby and dine out on food fresh from paddock to plate, while drinking refreshing natural mineral water gleaned from springs bubbling beneath the ground.

Daylesford is joined at the hip with Hepburn Springs, enabling you to pamper yourself while being professionally productive. You can also plug into the arts in a visit to the Convent Gallery.

The Jonai Farms are not far from the legendary ‘Hanging Rock’ in the Macedon Ranges so you will be able, weather permitting, to pack a picnic basket full of delicious charcuterie and go adventuring too. Be sure that you don’t disappear though.

This will be a food and wine adventure experience second to none and with vineyards and the gourmet village of Kyneton also nearby you can stock up on wonderful culinary delights to get you through the winter ahead. The workshops Kate Hill and the Chapolards are holding in Australia are all about true food craftsmanship; the considerable art of salting, smoking and curing to preserve food as items of beauty and taste.

It’s also about the ‘art of the table’ and ‘learning and feasting with like-minded people’.

If you do miss out, don’t despair, you can always plan a trip to the Kitchen at Camont.

“I coined the term French Farmstead Charcuterie to describe the ‘seed-to-sausage’ farming that the Chapolards (and a few other pig farmers in France) follow… the traditions of France, shopping at a village market, knowing the person that produces your food, are still a part of everyday life in the French countryside. There are many stories to tell and the Chapolard’s is but one”. The Kitchen at Camont in Victoria, Australia

Apparently this could expand due to demand!

Images: Special thanks to Kate Hill, the student, friends and followers of the Kitchen at Camont

Artemis is the daughter of the King of the Gods Zeus and Leto. Her twin brother is Apollo. She is the lady of the wild things. He is the god of music, playing a golden lyre. She is the huntsman of the gods and protector of the young. He is…