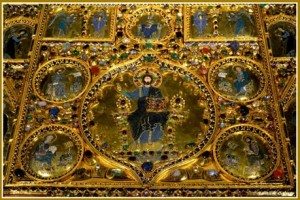 The history of Venice over its 1100 years is littered with wars, profiteering from other nations wars and counting the loot brought home.  An amazing statistic is that in all of history there has only been three million Venetians and it’s staggering to believe a city the size of New York’s central park was paramount in the conquest of Constantinople, the greatest and richest city on earth and then go onto become, by 1500 the largest empire in the west.  Inside St Mark’s Cathedral behind the high altar is an extraordinary assemblage. 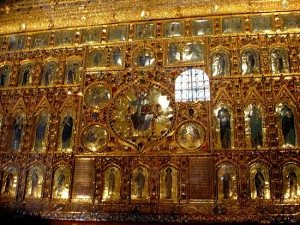 The present appearance of La Pala D’Oro dates from 1342 when a Venetian goldsmith created a Gothic structure in gilded silver enriched with 1,300 pearls, 400 garnets, 300 sapphires, 300 emeralds, 90 amethysts, 15 rubies and various other stones. These act as an architectural framework to hold finely painted Byzantine enamels of the saints and apostles together with a central figure of Christ. 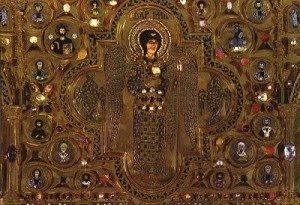 On a frieze at the top is a glorious panel featuring the Archangel Michael and other enamels looted by the Crusaders at Constantinople in 1204.

Actor Belinda Giblin now in Blonde Poison at the Old Fitz Theatre in Sydney, Australia until August 15 was interviewed by Rose Niland The Culture Concept Circle