Courtship is to marriage, as a very witty prologue to a very dull play reported English playwright and poet William Congreve (1670 – 1729).

His colleague poet Alexander Pope (1688 – 1874) observed that beauties in vain their pretty eyes may roll; charms strike the sight, but merit wins the soul.

He was warning those who ‘dream in courtship, can in wedlock awake’.

Labassa, a National Trust of Australia (Victoria) property recently had its so-called love seat restored to all its padded and deeply buttoned glory, courtesy of a Volunteer’s generous donation.

It is characteristic of the Victorian obsession for luxurious style with added comfort.

This love seat has a history…if only it could talk what tales would it tell?

Its development depended on a great deal more than just making a decision to build a couch for three people. A contemporary take on an old theme…

Love and ‘courtship’ did not really come into coupling for the sake of a household for a very long time.

Marital status was a dynastic and legal decision for nobility to beget heirs for centuries.

It was an important aspect of establishing a household for everyone else and not necessarily presided over by a religious person.

How it was conducted prior to the 20th century in the west, wholly depended on your place in society. 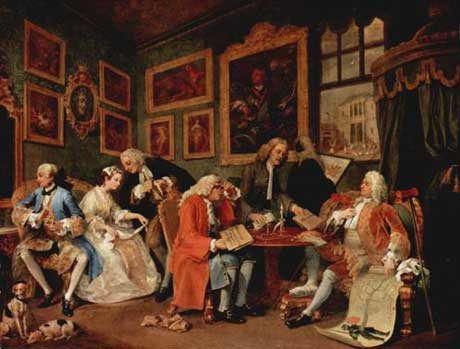 The satirical tale surrounding the series of works entitled Marriage à-la-mode or the ‘Marriage Settlement’ painted in 1743 by 18th century English painter and satirical commentator William Hogarth, was a series with a moralistic warning.

It revealed the disastrous results of an ill-considered marriage for money and satirized patronage and aesthetics.

Two dogs chained together in the bottom left hand corner, are symbolic the marriage being negotiated may have a bleak outcome!

The Earl’s son the young Viscount Squander is more concerned about his own image in the mirror, than the unfortunate young woman listening to the silvery tongue of the lawyer, who would become her lover.

The grand portrait in the French manner on the rear wall confronts a Medusa head, denoting horror, on the side wall. The rest of the series documents that the whole affair didn’t end well.

Expressing personal feelings in relation to the beauty and bountiful joys of women became the province of troubadours during the Middle Ages.

The first liturgical rituals associated with marriage appeared in France around 1100 and from then on everything associated with love, courtship and marriage began to change, albeit slowly down the centuries to our own time.

Since the onset of humanist principles the declining importance of ‘collective rituals’, religious concerns and promotion of liberating the individual, led to society dividing their considerations to do with, the home, business and the places and tools of leisure.

As with all social change that affected the nature and idea of private life, it came from the top down, and took a long time to evolve.

There was a persistent rumour for a long time that the English playwright Will Shakespeare and his lady Anne Hathaway had a ‘courting chair’ during the 16th century.

However it appears there is no real documentation to substantiate it ever really existed, save a letter about a delivery of an elaborately carved 17th century timber chair purporting to be the one; now owned by The Shakespeare Trust.

The design of a wider chair thought of as seat for two was perhaps not so much motivated by amorous considerations, which later generations credited them for. 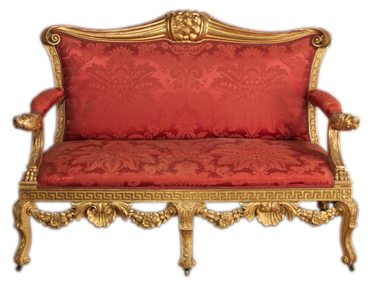 A notable example are the two seater settees, which were designed by English architect, landscape architect and furniture designer of the early 18th century.William Kent (1685-1748). It was from 1730 onward however that ‘two seater’ and ‘three seater’ chairs began to be fashionable.

Made by craftsman James Richards the settee was part of a suite of furniture designed and made for Sir Robert Walpole in the ‘Salon’ at Houghton Hall.

Kent used the new rage timber mahogany extravagantly and gilded it with 24 carat gold as well.

Many believe that its development at this time was really about having a wider seat to allow more space for the ample dresses worn by fashionable aristocratic women of the period. By the beginning of the 19th century they were found in cottages in the French, English, American and Australian countryside, having filtered through society as a desirable piece of furniture. In France and French colonies they were known as téte a téte and in England and their colonies, the courting chair, allowing as they did for greater intimacy of conversation. They could be found in the house or in the garden. To emphasize presumptions of duality, the luxurious padded and buttoned Victorian love seats, like the one at Labassa, had three sections presented together in an elegant S-shape curved form.

One writer compared the button with the navel, suggesting it was the emotional centre of a bourgeoisie and domestic society

It was also a clever device for using up the short staple cotton and wool combings which were the by products of mechanical spinning and held in position the large quantities of filled required in overstuffed sprung furniture.

This style of three seater spacing saving courtship chair or ‘love seat’ allowed a couple to sit together but not too closely. This highlights the fact that the Victorian family at all social levels was interested in controlling a young couple’s courtship.

A Chaperone also becoming involved, allowing them no privacy at all. 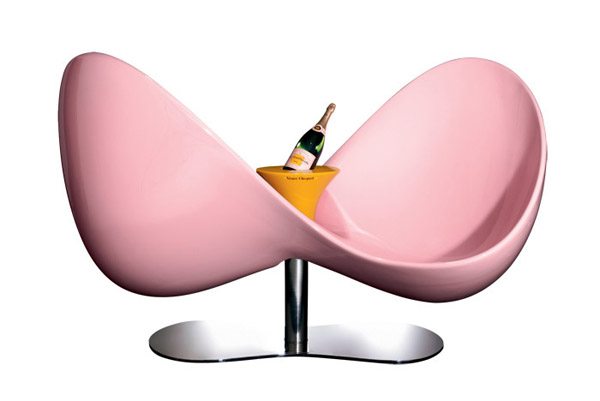 Cute as it is, can’t really see a love seat coming back into fashionable style, rather remaining a curiosity worthy of a ‘tete a tete’.

Kate Grenville in The Case Against Fragrance reports Rose, is acknowledging the negative impact of artificial fragrance on a significant number of the community