Labassa is a house in the grand manner, with its ornate French influenced Italian inspired design style whose many motifs come down to us from antiquity. The Labassa estate is an illustrative example of the social and cultural development of Melbourne.

This happened when the countryside where it had been built suddenly gained easy access to Melbourne city following the establishment of a railway line in 1879. Looking up at the facade, Labassa photo Carolyn McDowall

The National Trust of Australia (Victoria) is currently slowly and painstakingly restoring the house, to the format established when it first became Labassa

The house began its journey in style as Ontario following re-modelling in 1890, of an earlier house named Sylliott Hill, which had been built in1862-3 for a Melbourne lawyer Richard A. Billing. The original house reflected his status and success, which included being appointed Queen’s Counsel in 1878 and he lived there until 1882. It sold in 1883 to Melbourne businessman Alexander Robertson.

He commissioned Melbourne’s official architect for the City appointed in 1873 John Augustus Bernard Koch (1845-1928) who turned it into a house that reflected his client’s ideals and the status of the society of their day.

Koch remodelled it into the grand house that still stands, albeit the majority of it still in a sad state of disrepair.

It’s facade features a panoply of Roman arch style arches, which define the surrounding ‘verandah’s and grand entrance porch as well as interiors inside.

In its glory days Labassa’s opulent interiors were very much admired, and the main salon with its elaborate mouldings and columns, highlighted with gilding, are available as a special event venue to contribute to ongoing costs.

It also houses a unique costume collection, which can be viewed by appointment.

The garments epitomize the joys associated with living in marvellous Melbourne during the boom decade of the 1880s when the effects of the Goldrush was at its height.

Despite an extraordinary occupation history the main features have mainly remained intact. Koch excelled at creating a house in the French Renaissance design style. It is a huge project, and progress depends largely on the generosity of donations.

Contrary to what the majority of people in Australia seem to think The National Trust, and its various State branches, DO NOT have a basis in wealth given to them by government.

While the government may support individual initiatives from time to time, that’s the full extent of their involvement

In fact the not-for-profit, but for social profit The National Trust’s very existence relies on the contribution and enthusiasm of corporate and community supporters.

They have members, volunteers and sponsors who enable the administration staff in each state to present fabulous examples of our heritage to the local public for their benefit

It is the premier heritage and conservation organisation with museums and historic properties open to the public who need to continue to contribute if both its potential and community value is to be fully realised.

In Victoria the culture of The National Trust was being driven by a new and youthful generation, headed up by CEO Martin Purslow. Following his appointment in 2006 there has been many changes, all for the better and it was sad he left Australia after a coup on the board early in 2016. He was putting together new strategies for public engagement and, with the help of a loyal staff, was casting off old cobwebs to ensure highly creative innovators in service drive and deliver its many and varied programs going forward. Rather than just opening grand houses for the public to walk around, the plan was to ensure many people had an opportunity to meet and view them through a social occasion, or by hiring them to hold landmark events in their personal or professional lives.

This included Tasma Terrace, the home of The National Trust in Victoria, a splendid group of terraces at the top of the city, whose wrought iron embellishments are particularly relevant to their current offering, The Antipodean Steampunk Show

The Italian influence on style and design which the architecture of Labassa projects gained a real foothold during the reign of François 1 (1515-1547), the second king in the House of Valois-Orleans. He was the last product of chivalry as well as the first modern King of France. This was during the period when they were building the many and varied chateaux of the Loire valley, which was rich in agriculture.

Successful military campaigns against Italy conducted during the reign of Louis XII (1498-1515) had meant he laid claims to the Duchy of Milan, through his grandmother Valentina Visconti.

France at that time occupied Milan and Genoa for a period of 25 years and courtiers were coming and going between the Italian cities and the court of France during that time, reporting on all they had seen.

During the middle of the sixteenth century François moved his court to Paris converting the medieval hunting lodge of Fontainebleau to a royal residence. A six-piece series depicting the History of the Francis 1 and the renovation (1528-32) of his residence at Fontainebleau had included the creation of the so-called Great Gallery. The Fontainebleau Tapestries represent a woven repetition of the decoration of the south wall of the gallery. Restorations have revealed that the Italians artists Giovanni Battista Rosso and Francesco Primaticcio’s talents were brought to bear in a full opulent expression of the French Renaissance as he carried out the sculptural surface decoration of 1533-40. Its combination of stuccowork and mural painting concealed wall surfaces, making the Gallery memorable. Gradually aspects of Italian culture influenced French intellectual ideas, as well as the moral and social mores of the court.

Italy’s humanist ideas were reinforced and aristocrats were attracted to the Italian’s luxurious manner of living; their gardens, dress and manners were real discoveries.

When French nobles visited Rome they filled their trunks with marble and bronze statues, ancient medals, books and paintings and took them home.

They regarded images of ancient heroes and their deeds as a means of stimulating a desire for military glory, impressed as they were by the vision of Imperial Rome.

The architects of Italy and France respected stone enough not to treat it with unnecessary prodigality, often using it to dress brick structures. 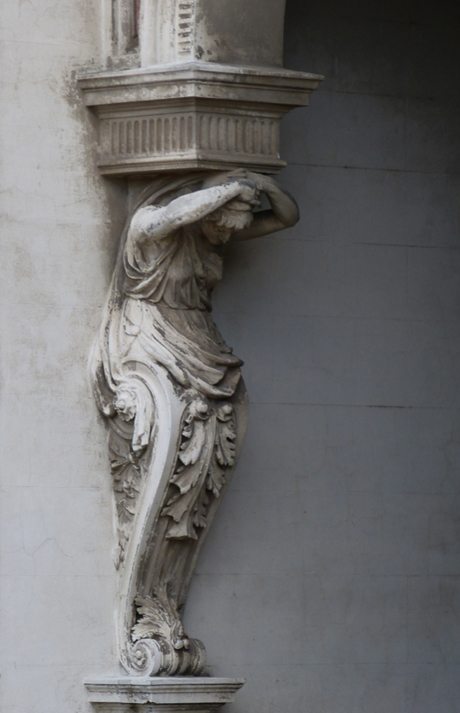 Labassa certainly offers in its exterior, respect to that idea.

His peers in Melbourne admired John Koch for his progressive attitudes, ideals, imagination and distinctive work.

He pioneered the new science of heating and ventilation, employing earlier Hellenistic motifs in his work, including the Greek key pattern, classical masks, acroteria and foliated scrolls and consoles.

This is not surprising as the ancient Roman architects had borrowed all of these ideas from earlier Greek temple models and made them part of their own heritage.

Koch located a lot of these on parapets highlighting the skyline.

Labassa is considered his most striking achievement.

It was finished with unpainted cement render dressed with bluestone with the mansard roofs covered in slate.

A truncated conical roof is a special feature, with a helmeted head incorporated in the parapet over the east bay window.

These two lovely ladies are supporting the weight of the dosseret under the arch. They are a unique feature their foundation in the ‘caryatids’ that hold up the Porch on the Erecthion a small building on the Acropolis at Athens.

They turned into what are called ‘terms’ in architectural styling, their legs removed they have been incorporated into a console shape, used frequently in Roman architecture. The original caryatids from ancient Greece with legends and stories attached that gained popularity during the women’s movement of the late 19th century when Labassa was being built.

The house incorporates sculptures, elaborate cornices and deep mouldings for its interiors to simulate French boiserie panelled rooms for its formal rooms.

In the main salon huge Corinthian style columns embellished with glorious floral swags, the cornice and chimneypieces have been highlighted with gilding that served at the time to reflect the light. Labassa also has extensive outbuildings, including stables (1873), a conservatory and tennis pavilion (c1890) all of which survive.

The house eventually became a residence for a succession of enterprising, prosperous families, one of which was mining millionaire John Boyd Watson, who moved in 1904.

Watson gave it the name Labassa and carried out extensive repairs and redecoration work, which stood it in good stead until his death in 1911.

After his death, with the pressure on large estates to be subdivided, great portions of Labassa’s land were offered for sale.

Mrs. Watson retained only the portion containing the house as forty-six allotments of land were auctioned off as new suburban streets were being formed

World War I and II would mean Labassa’s fortunes would change again. It was converted into a myriad of flats that survived for sixty years.

Many people have lived in it, or have been married from it, held extravagant parties in it, enjoyed Christmas and Easter together in it while sharing their dreams.

The apartments were occupied at first by immigrants from Europe and then later by bohemian artists and hippies during the swinging 60’s and 70’s.

A modern house was also built in the front of the house at this time. Thankfully it has been demolished since, allowing a vista of it from the street. It was certainly an example of poor public planning. Productivity and profit is a by-product of ensuring our  heritage becomes a mainstream element of local, national and international social and economic life. It is all about encouraging the development of a principled and prosperous society by identifying and releasing human potential.

Visit Labassa soon. That way you can also discover for yourself its relevance and contribution to our heritage today. Consider donating towards Labassa and its rescue and restoration.