A labyrinth is an ancient symbol relating to wholeness, with powerful circular patterns within a sphere that merge the sublime and beautiful at the point where heaven and earth meet. It is meant to be a complex pattern of great meaning. Starting on March 1, 2015 you can learn how to walk the spiritual path of a labyrinth in Centennial Park, Sydney, from a trained facilitator. It is FREE and open to all. The circle is fundamental, containing the essence of many other symbols; it is all about the sun and earth, the heavens and the moon and the movements of the sky, which happens in repetitive cycles. It suggests the eternal and infinite and means that a labyrinth today has become universally acknowledged as a symbol for both the human essence and the spirit. 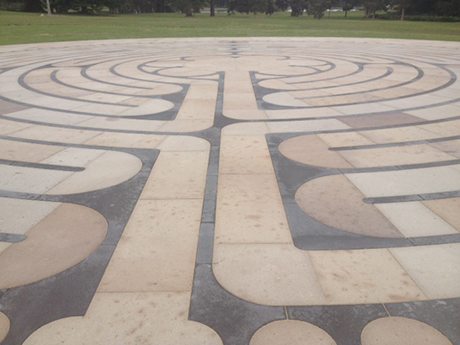 Walking the labyrinth is a deep letting be of self so that you can remind yourself what it is to simply be in community in a peaceful, harmonious way. In a nutshell, it is meant to enable humankind and to awaken the knowledge already encoded into our DNA. It is at the threshold of life, positioned between ‘the metaphysical and mundane reality’. It is a traditional symbol, one that provides support for a person’s faith or can help the uninitiated in any religious order to find a way forward. To prepare, you may want to sit quietly and reflect before walking the labyrinth.  If someone is walking more slowly than you, feel free to overtake, which is much easier at the turns. Patience is something to acquire. Participants will learn the three phases of walking the labyrinth by Releasing on the way in – letting go of distractions and that which no longer serves, Receiving a sense of calm as you pause in the centre and Returning by the same path – resolving to engage with your world in a new way. 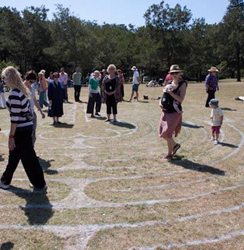