All hail the Ladies in Black, MTC presents the QTC production

Have you ever had a dress that changed your world?

Lisa Miles believes she has found hers in the Model Gowns department of the prestigious department store, where she recently gained a job on her own merits.

Like all of the gorgeous haute couture dresses on display, the fabulous frock has a name, the Lisette, and the lovely Lisa longs for the day she might be able to make it her own.

Fashion meets art, and life is a work of art in the making, a sentiment entirely proved when the brilliant production by the Queensland Theatre Company (QTC) of Ladies in Black toured Melbourne in 2016.

A truly delightful heart-warming and very simple story, it is based on Madeleine St John’s well-known novel.

This life-affirming adventure, one imagined with marvellous music and meaningful lyrics by Tim Finn, was a huge hit in Brizzie in 2015 with its smoothly operating set and gorgeous costumes by award winning designer Gabriela Tylesova.

She was inspired to produce garments with that feel good 50’s Dior feel, which show off our Ladies in Black’s figures and their considerable style to great effect. Sarah Morrison as Lisa, with Carita Farrer Spencer as Mrs Miles in Ladies in Black, a QTC production presented by the Melbourne Theatre Company, 2016

It is musical theatre at its best, a laugh out loud comedic gem punctuated by moments of serious heart rendering emotion, as the Ladies in Black are brought to vibrant life by an exceptional ensemble cast.

They expertly craft their characters, infusing them with a great deal of love and understanding.

Directed by Simon Phillips, this very special piece of performance art brilliantly captures the Aussie psyche and social attitudes that prevailed during the 1950’s in Australia.

Set during the era when Australia was on the verge of becoming multi-cultural, everyone drops more Aussie slang phrases than Nino Culotta managed to do in his novel ‘they’re a weird mob, published in 1957.

This was a legendary social commentary, which highlighted the attitude of men belonging to the working class of that period.

Here the alternate view espoused by St John offers the women’s viewpoint and it has been beautifully translated by Carolyn Burns.

She imaginatively met morphs our Ladies in Black through her rare insight of who they all are, into our modern world providing connections we can all invest in.

Lisa Miles (Sarah Morrison) is an unworldly young girl in her late teens with a delightful naivety to her nature. She’s longing for the time when soon ‘I will be me’.

She has changed her name from ‘Lesley’ to Lisa in anticipation of moving forward, and as a mark of her leaving a suffocating life at home behind. Lisa is working at the fictional ‘Goode’s’ over the Christmas season while she is waiting for the results of her exams for the ‘leaving’ certificate, hoping the results will give her a chance to spread her wings.

She’s hoping with all her heart to gain enough marks to go to Sydney University, despite the outraged objections of her father (Greg Stone).

Like most of the men of his age (and still some in ours), he earnestly believes that ‘higher’ education should only be available to men.

Out in the ‘real world’ Lisa soon discovers that some of her female colleagues at Goode’s are in their own way, all headstrong heroines not wanting to bow down to convention. Which way will she choose to go? Well it will all depend on those exam results!

Growing up as an only child, Lisa’s life to date has been spent with her head in books enjoying the escape from reality and her parents constantly fussing over her.

Reading widely also offered a bonus, providing an opportunity to excel at her studies, at least until she is old enough to take a job. Goodness, how close to the bone it all was for me.

I could feel those around me at the Wednesday matinee shifting uncomfortably on their seats in recognition of this once all prevailing put-down attitude. It’s made all the more painful when in the face of his opposition to their daughter’s wishes, her mother (Carita Farrer Spencer) disappointingly falls into line. In the opening number our gorgeous girls are caught wearing brightly coloured glamorous gowns, like those movie celebrities such as Grace Kelly and Audrey Hepburn were wearing at the time. Black is slimming and chic for Ladies in Black, a QTC production presented by the Melbourne Theatre Company, 2016

They contrast strongly with their smart ‘black’ outfits, the necessary uniform for all shop girls of the day, black being both sensible and chic. 50’s prints rule the day, in Ladies in Black, a QTC production presented by the Melbourne Theatre Company, 2016

Then there were, if you were married, the ubiquitous floral cotton house frocks topped with full-length aprons, which formed the domestic uniform at home – the norm. 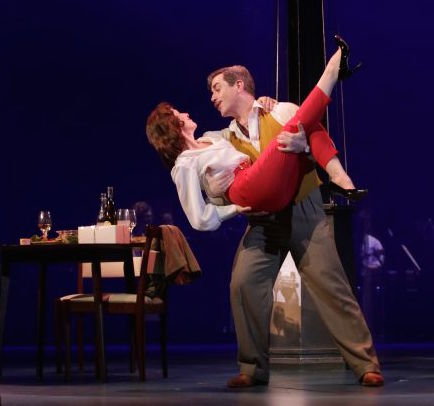 However if you were considered exotic by your colleagues, much like our much loved European refugee Magda (Christen O’Leary) whom we meet in charge of Haute Couture gowns, you couldn’t and wouldn’t be that dull.

She’s so slim and gorgeous Magda can get away with wearing anything really, including high- waisted bright red peddle pushers on the weekend

When Lisa first arrives at Goode’s department store she is assigned to working in the Cocktail Gown department with Patty (Lucy Maunder) and Fay (Naomi Price) who do their best to educate her how their leader Miss Cartwright (Kate Cole) would like her to be.

Lisa is particularly urged on to succeed by the soft-hearted Miss Jacobs, the frock department’s seamstress played with pathos by Deidre Rubenstein, who cautions the lovely young woman to put all those who oppose her plans noses out of joint, by being as clever as she can be. Sarah Morrison as Lisa, with Christen O’Leary as Magda, Ladies in Black, a QTC production presented by the Melbourne Theatre Company, 2016

Meeting the mighty Magda from Model Gowns, who all the other ladies fear (she’s Continental) will change Lisa’s life forever. 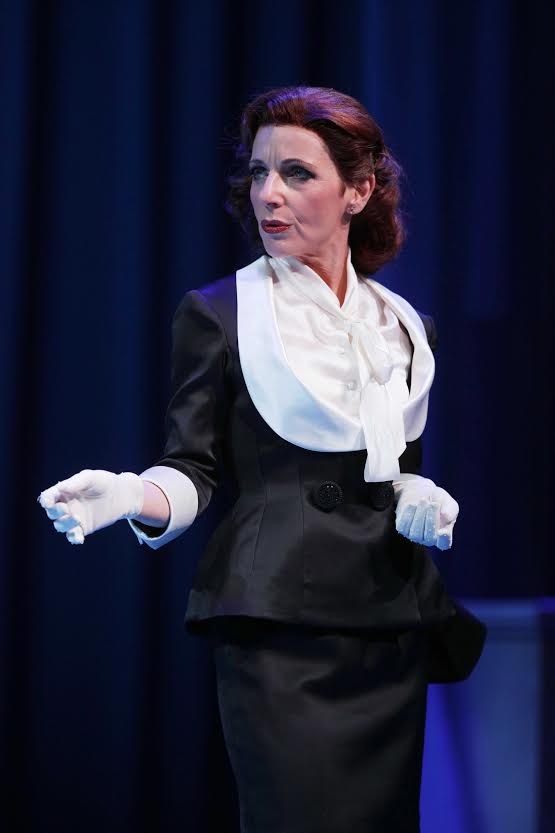 Her awakening will be a somewhat painful affair, as she realises the people she will be spending all day every day with, at least for a few months, all have complex lives she cannot help but be drawn into.

Her parents worry about her being out in the big wide world are alarmed at her making all new friends, especially when Magda invites her to come home to Mosman on the ferry for tea.

Very racy, Magda is such an ‘exotic’ name and Lisa’s parents do not know how to cope with her meeting people from other culture’s, which has not ever been a part of their own experiences in life.

The mature Magda has a loving relationship with her partner Stefan and mentors her young charge, not only in the delightful ways of the world, but also how to go forward and live her life with integrity.

The men who feature in some of our ladies lives could have seemed more like accessories, except they are not.

Their many different roles are played with great sensitivity and flamboyant flair by Andrew Broadbent as Frank and Joe, Bobby Fox as Rudi, Lloyd and Fred, with Greg Stone as Mr Miles and Stefan.

One of the aspects of the production I absolutely loved, was that the Ladies in Black are supported by a marvellous mini orchestra, magically performing the delicious music of the score. Its presence at the rear of the stage adds both a visual and performance enhancing, dimension.

Lisa being a ‘bookworm’ for such a long time, shares the joy with her new best friends, none more grateful than Fay (Naomi Price) who is seeking real love.

She is finally caught out ‘kissing a Continental’ with the accent being on the fact that his strong lips are indeed gentle, bringing cross cultural marriages into the equation. Haute couture by Gabriela Tylesova for Ladies in Black, a QTC production presented by the Melbourne Theatre Company, 2016

With a delightful nod to Anna Karenina and Middlemarch, serious novels both, plus Christian Dior, Chanel, Hardy Amies, Hartnell, Yves Sant Laurent and other fashion gurus, including Audrey Hepburn wearing Givenchy, Lisa and her colleagues enjoy exploring the lives of their characters Magda and Lisa, Ladies in Black, a QTC production presented by the Melbourne Theatre Company, 2016

The working class and indeed blue collar men of this era wanted their women at home and at their ‘beck and call’… a ‘standard for bastards who come home plastered’, lyrics of a song the girls accentuate.

This was a sentiment many present understood only too well.

Tradies of the day often spent from knock off time at 3:30 until dinner time at home at the local pub, grabbing a chook or two that had fallen off the back of a truck, before arriving worse for wear to not spend quality time with their family. At the time European refugees, all of whom had to have ‘white skin’ to be admitted, were arriving daily on ocean liners endeavouring to find a new life after the war to end all wars, one that had taught them the true value of family.

They were very good at their craft and didn’t take an ‘easy life’ for granted, often unwittingly and unwillingly putting their Aussie colleagues in the shade with their efficiency, commitment and competence, ensuring tension abounded for all.

Nicknamed reffo’s, while there were those who embraced their arrival and welcomed their input, there was just as many frightened and fearful of their different looks and cultural differences, and gave them more than a hard time.

Ladies in Black, a QTC production presented by the Melbourne Theatre Company, 2016

Thankfully their arrival would challenge us to all change our lives for the better and give insular Aussies of that time, a reason to aim at expanding their horizons beyond its borders nationally and the isolation of their island home, internationally.

The age of travel then began.

Director of the show Simon Phillips balances the dance scenes and musical numbers with great skill, and despite Ladies in Black being some 150 minutes in length, the action moves along at a breezy up-tempo pace, capturing and holding our attention admirably.

A few are definitely fleet of foot, especially the exotic continental Rudi (Bobby Fox), who seems to skim across the stage effortlessly due to some light fantastic and very nimble footwork. Ladies in Black, a QTC production presented by the Melbourne Theatre Company, 2016

The songs with meaningful lyrics are all delivered with the courage of their convictions by the eight girls and three guys with insightful style.

At the end Lisa not only passes her ‘leaving’ certificate, but comes first in the state making the headlines of the daily newspaper where her father works. Predictably this spotlights his attitude, forcing him to finally embrace change.

With the January sales almost over and her new day about to dawn at University, Lisa is also able at last to purchase her Lisette, her first haute couture gown with the prospect of wearing it to Fay and Rudi’s engagement party.

Must say I loved every minute of the Ladies in Black, a wonderful example of art reflecting life.