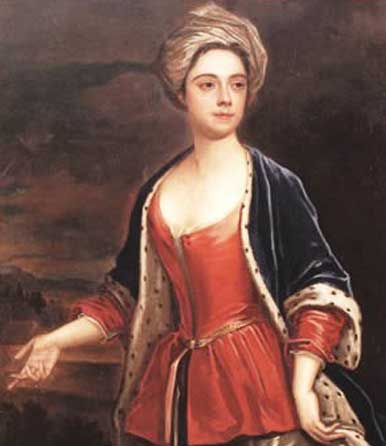 Lady Mary Wortley Montagu (1689-1762) nee Pierrepont was one of the so-called Augustan age in England’s most colourful adventuresses and an interesting woman of influence. Born into wealthy surroundings, Lady Mary’s mother died when she was three and her father the 1st Duke of Kingston upon Hull and a despised governess then raised her.

A self-confessed poet and lover of verse by the Roman first century poets Virgil, Horace and Ovid, Lady Mary self educated in her father’s library at Thoresby Hall in Nottinghamshire, teaching herself Latin, which she loved, a privilege only reserved for men at that time.

During her teenage years she began writing poetry, which was not published for the public, circulating widely however among members of her aristocratic social circle.

Intelligent, a brilliant wit with considerable skill, Lady Mary also wrote verses, satires, epistles, essays, ballads and songs in response to the extraordinary experiences and expansive events enjoyed throughout her lifetime. She gave public form to feelings satirizing the vanity of women during the first half of the eighteenth century, a time for many firsts. The toast of the notorious ‘Kit Kat Club’, a haunt of Whig grandees ‘who gave lustre’ to the parliamentary Whig party in her youth, Lady Mary’s outspoken adult opinions and prejudices presented as ‘polished malice’.

Her father was extremely proud of her precocity and proposed the members should toast her aged eight years and so they asked to meet her, and she arrived to delight the gentlemen with her beauty.

She declared later in her life that it was the proudest hour of her life for statesmen, poets and wits petted her and, as customary, her name was engraved upon a drinking glass’.

She corresponded regularly with her friend Anne Wortley and eventually eloped with her brother a member, the Whig Member of Parliament Edward Wortley Montagu (1678-1761) to extricate herself from a marriage arranged by her father who was furious.

Edward was attracted by her looks and her literary gifts.

Writers wanted the right to have a voice and speak in what became a relentless search for ‘truth’. In her essays and poems Lady Mary often described the benefits of providing women with an education and offered her thoughts on marriage.

Lady Mary’s was the age when the focus on private life and the family became the centre of emotional life. Imagining, experiencing and protecting private life became an important pursuit with clear boundaries drawn between ‘the function of public representation and the private sphere of intimate retreat’.

Lady Mary’s boast that she and her husband were the first Christians from Europe to journey across the Hungarian plains in 1716, where he was to be ambassador to the Sultan’s court, was a valid one.

At the very least Lady Mary was undoubtedly the first Englishwoman to do so, clad as she was in rose coloured pantaloons and wearing rose-tinted spectacles.

Consequently she inspired many women travellers and writers who came after her.

Appointed Ambassador Extraordinary to the Court of Turkey, Lady Mary’s husband Edward was also a representative of a London-based company.

They traded in such desired goods as tulips, coffee, and silk, which in this day and age would be called ‘a conflict of interest’. His role was to keep trade functioning smoothly and he was charged with being able to affect a truce between the warring nations of Austria and Turkey.

During their stay in that exotic place Lady Mary like many women of her age tried to use the highly expensive Balm of Mecca, which contained among other things, turpentine and aromatic oil.

It made her face swell and skin turn red and so she gave it up but did however as promised, sending pots of this fabled balm to her friends back in England. In Turkey Lady Mary had her son inoculated by Embassy surgeon Charles Maitland against smallpox in 1717 and following her families return to England after her husband had been replaced in 1718, she inoculated her daughter in 1722.

From Constantinople she wrote to Miss Sarah Chiswell ‘The small-pox, so fatal, and general amongst us is here entirely harmless by the invention of ingrafting, which is the term they give it… and that ‘the French Ambassador remarked that each September, thousands of the ‘Turks took their smallpox by way of diversion’, just ‘as Europeans took the waters’

Having had smallpox as a child herself and losing her beloved brother who died from it, as well as her eyelashes permanently, Lady Mary pioneered the idea of preventative medicine in England.

Against considerable opposition she introduced smallpox inoculation in 1722 by convincing the Princess of Wales to secure a pardon for felons in prison, if they would submit to the operation

They had nothing to lose, so they gave it a try with Charles Maitland also back in England, performing the variolation, as it was known.

After trial and error inoculation was strongly approved by the College of Physicians in 1754. It was a happy ending for the prisoners who all survived and were released

After that all opposition declined and Lady Mary shares the honours with Dr. Edward Jenner, who performed the first vaccination in London using cowpox rather than smallpox as a vehicle in 1798.

It was the greatest medical achievement of the age, which developed the century later into the science of immunology. Lady Mary was a prolific correspondent who set a standard in style for all other women of her age and beyond to live up to. In 1739 she went off to Italy where she lived until 1742 and then she settled in the papal state of Avignon in France, staying there until 1746.

Entirely unconventional, she lived with a younger ‘Count Ugo Palazzi’ for ten years in the Venetian province of Brescia, moving to Venice in 1756. The Turkish Embassy Letters of the Right Honourable Lady Mary Wortley Montague, written during her travels in Europe, Asia and Africa to persons of distinction, appeared in 1763, published the year following her death.

She had charged the Rev. Benjamin Sowden in 1761 when she was heading back to London following her husband’s death, to do with them whatever he decided and today they are the basis for her literary reputation.

Lady Mary had commented when reading the letters of Marie de Rabutin-Chantal, Marquise de Sévigné and asserted that ‘… without the least vanity, mine will be full as entertaining 40 years hence’.

They were a best seller and became a model for lively letter writing, inspiring and influencing sensibilities about what constituted an effective and entertaining personal letter.

Her description of life inside a harem would go on to influence the work of Orientalist painters, illustrators, and writers in the nineteenth century.

Would have loved to have read her diaries but her daughter burned them after she had died of cancer seven months after arriving home.

At the Sydney Opera House the creativity of eight youthful Australian composers as expressed in Fanfares, are now alerting patrons that shows are about to begin