Radiant in red, on Saturday evening August 24th Sydney musician and teacher of music Jenny Eriksson, surrounded and supported by her wonderful team of talented musicians and singers, wowed the crowd packed into the intimate space at the old ‘Independent’ Edwardian theatre in North Sydney, recently renovated for such special music events.

It was highly appropriate for playing music from 1300 to the contemporary age, 700 years of songs for voice and viols. It was marvelous music that resonated long and lingered softly, bouncing of the grand Victorian ‘Baroque’ style ceiling.

What was wonderful about the show was the diverse mix of instruments, particularly the various viols that worked so well with the Theorbo, an instrument originally played by none other than the master of baroque music himself, French composer Jean Baptiste-Lully (1632-1687).

The audience and enthusiastic and happy group cheered and clapped as their ‘viol’ heroes and heroines proved once and for all that in the making of music no hard and fast rules apply.  The musicians were all enjoying the pieces they were playing and it showed.

The singers and their voices were all amazing, each in their own right.

They were perfectly chosen by Jenny who they acknowledged is a powerhouse of inspiration.

For the music they were performing, their voices were wonderfully ‘in tune’ if you like with not only the music itself, but also with the composer’s and lyricist’s intent. 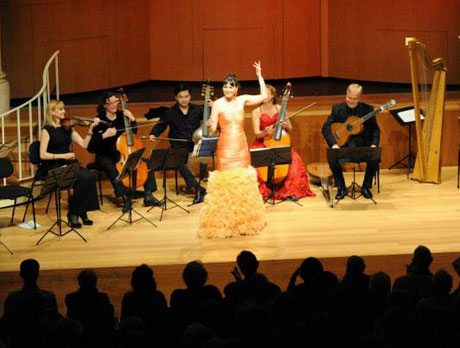 Narelle Evans - a powerhouse of singing style in a fabulous frock!

Narelle Evans had superb strength, a richness of tone not often encountered but once heard can never be forgotten.

Megan Cronin was all delight, her high notes sounded with such clarity and exquisite purity they made you ache to have lived at such a time when music was all about beauty and joy.

Mara Kiek comes loaded with character, deep, throaty and delightful. Loved it and her get up and go girl style.

Belinda Montgomery sang La vie en rose followed by Ave Maria not an easy transition to make, but accomplished flawlessly and with buckets of feeling.

Then there was Nicole Thomson who sang ‘She was Beautiful’ the famous ‘Cleo Lane’ song, and she was. I particularly liked her rendition of Hanachpachpa cussicuuinin, composed by Anonymous around 1630. It reeked of eastern mystique and magic. There were many  new versions of old songs played on viols, violin, theorbo and percussion, classical guitar. And not to forget the delightful ‘mandolin’, which I would have liked to hear making many more such marvelous sounds.

Tommie Andersson, an all round muso genius moved effortlessly from theorbo to both classical and renaissance guitar with great aplomb, wit and style. So great to hear these instruments played with so much soul.

There were a number of highlights of the evening including the stirring and beautifully rendered version of Padam Padam arranged by Jenny Erikkson and sung by Narelle Evans to start the show. She looked amazing too in a ‘feathered dress’ that would have had fashionista’s envious.

For me the Chacona by Juan Aranes who died in 1649 was very special. A combination of voice, viola da gamba, double harp and renaissance guitar, I loved this piece. It was stylish, moving, superbly sung by Belinda Montgomery and Megan Cronin, whose voices blended beautifully together.

Then there were Muzette 1 and 11, pieces de violes composed by the master himself Marin Marais (1656-1728) at Paris in 1717. Played by Jenny on solo viola da gamba; Cathy on continuo viola da gamba, Tommie on theorbo and Alex on the double harp, they were truly double the joy. Jenny performed her solo beautifully playing with her whole heart and soul and the passion of someone for whom music is integral to life.

Mara, Narelle and Belinda came together to have some fun as the Marin-ettes singing the jazz classic Chattanooga Choo Choo, with Jess and Mara hamming it up on the snare drum. The finale was the memorable George Gerswin piece Summertime, which had been arranged especially by the young Australian composer Alice Chance, of whom we will hear much more.

Everyone was on stage including narrator of the piece baritone David Hiden, who joined the singers for their version of this classic American favourite.

We were advised it was ‘very fresh’ the whole group only having had one opportunity to come together to practice that very afternoon.

Most people would be horrified at the thought of learning something only hours before they were to go on stage, but not our stars who took it all in their stride as an aspect of life on the musical roundabout.

It was a great finale, the audience enjoyed it so much they had to perform it once more before leaving the stage to join all the fans for a drink in the foyer after the event.  The CD’s were selling fast and the mood relaxed and happy.

ABC announcer and official launcher of The Marais Project CD for the evening Christopher Lawrence flew up from Tassie to join in, giving Sydney followers a chance to catch up. As the audience acclamation proved the simply irresistible sounds of music enjoyed by all those who attended this delightful concert were led with grace and beauty by Jenny, the Lady who definitely ‘Sings the Viol’.

Jennifer Eriksson originally founded The Marais Project in 2000 to perform the complete works of Marin Marais an 18th century genius of the viola da gamba. Over the years their repertoire has greatly expanded and now includes a huge range of wonderful vocal and instrumental music for the viola da gamba from the 1300’s to the present day. They also commission and arrange new music for the ensemble.