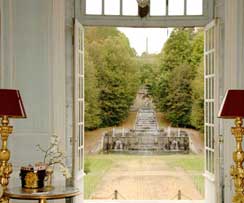 The spectacular cascade and fountain at Chateau Villette designed by royal gardener Andre Le Notre is one of the few in France today still in working order. Artists were, and still are regarded as interpreters of truth. French gardener Andre Le Notre (1613-1700) was certainly one. Witty, and much admired, contemporary descriptions characterize him as vivacious, exuberant and enthusiastic.  He began with the spade and hoe, developing his abilities until he was invited to design some of the finest parks in Europe. In the process he became a close friend of Louis XIV (1638-1715). They shared the same vision and ambition to beautify France to glorify Louis’ reign. As well as being in tune on matters relating to art and design they were both keen collectors of botanical specimens in a wide range of fields. The Chateau Villette, near Paris has retained and enclosed the light of Italy in its stone, keeping the sobriety of an architectural project worked on by two of the most illustrious architects who also worked with Louis XIV at Versailles, Francois Mansart and his nephew Jules Hardouin Mansart, wit gardens by Andre Le Notre. Viewed from inside the Chateau the cascade is set into 185+ acres of garden that spread out behind it in the central axis with two rectangular lakes filled with swans, ducks, birds and fishes. Villette is often called ‘Le Petite Versailles” 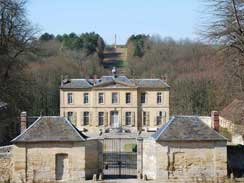