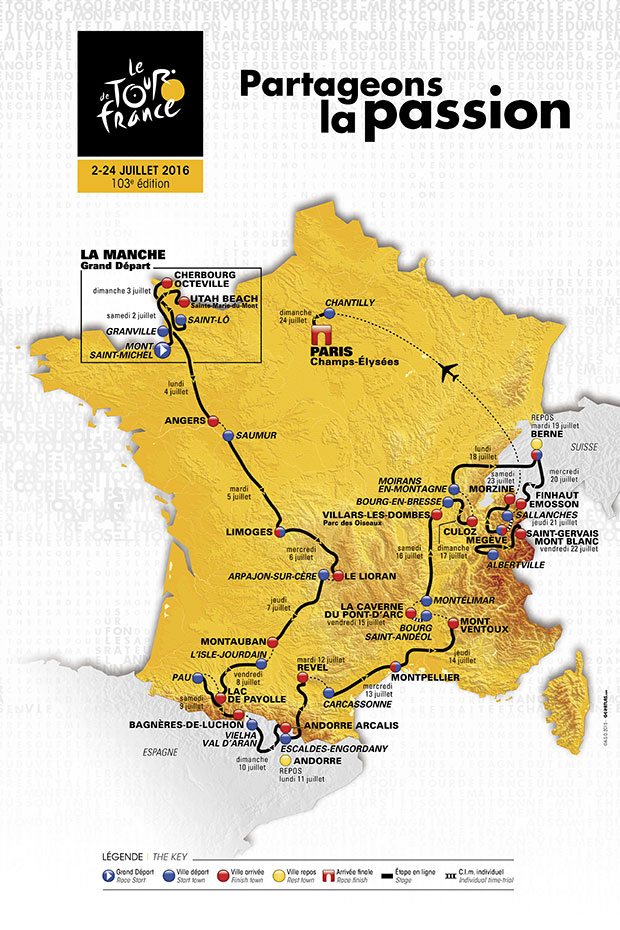 What time is it; well it’s Le Tour de France time, that time of year when the biggest global event on the cycling calendar is underway. The boys in Lycra are busy battling it out to win one of twenty one stages, to have the honour of wearing the yellow jersey, to be first across the line on the Champs Elyssess in Paris on Sunday 24th July, 2016 and-or ultimately, to win the race.

Endurance, patience and above all persistence are required from the outstanding competitor who wins overall, as did Australia’s cycling hero Cadel Evans back in 2011, following a performance of great éclat. He had all of Australia ‘yelling for Cadel’.

There are 198 participants in this the 103rd Le Tour de France, which will visit three neighbouring countries: Spain, the Principality of Andorra and Switzerland with everyone attempting to avoid pile-ups, crashes and chaos along the way.

Thank heavens for SBS Australia, as they strive to keep us ‘live’ and in touch with the daily adventures taking place, along with the Aussie sharpshooter photographer who is in part a yarn-spinner, part cult icon, part mountain goat and all round good guy, the indomitable Beardy McBeard and his Caravan.

Together they keep all the cycling enthusiasts down under well informed of all the carry on; it’s like being there.

My afternoons are currently packed with excitement as great visuals of the cyclists from all around the world are beamed ‘live’ as they take ‘centre stage’ with a backdrop of some of the most exciting built environment scenery there is to be found, much of which I have travelled through back in ‘my day’.

The charm and the strength of the French countryside gives everyone watching an uplifting experience, dotted as it is with a rich inheritance of weathered buildings that please the ‘eye’ and keep faith with a diverse and dramatic rural landscape, in a captivating array of beauty and timeless quality. From rustic barns, whose additions were made according to needs to superb manoirs of bricks made from the earth and those stunning stone chateaux along the way, for me it’s like having a feast for all the senses every day for nearly a month while standing here at my Varidesk writing and publishing.

The buildings come in a pastiche of styles, many based on classical architecture with influences from Italy combining with the local and very strong regional traditions. The stunning lavender fields, which surround the ancient Abbey at Senanque nearby the village of Gordes, in Vaucluse, Provence

They offer a glimpse of the beauty that comes from combining the local materials of earth, stone and wood, set against the natural colours of the landscape and the elusive light of countryside rich in its diversity, helping them to maintain that great physical presence of France – ‘la difference’.

A big drawcard, France’s seductive spell remains elusive, in look, feel, taste and spirit it is a country like no other and despite inevitable modernization it remains unique and Le Tour a very special event.

A pale iridescent sky provided a superb starting setting for this year’s rich tableau, one that enchanted on viewing and is sure to linger forever in the memory. The incomparable St Mont Michel island, which until the 1960’s it was accessible only at low tide, with many a weary or unsuspecting traveler caught in lethal surprise by the return of the high tide, which happens at lightning speed.

Stage 1, 2016 was predicted to be flat and fast as it began in the shadow of France’s most majestic landmark, which has inspired writers for centuries, the tiny granite island of Mont Saint-Michel with its incomparable Abbey built as a monument to god, which has since become a monument to man. The Abbey that surmounts the island is a phenomenal piece of architectural ingenuity and skill and one of the most visited places in the whole of France. A Gothic extravaganza, it was created between the eleventh and sixteenth centuries of stone that came from as far away as the English coast.

On the first day or two the cyclists travelled from Saint Michel through picturesque parts of Normandy where the sky and the interplay of sea and sky enraptured Impressionist painters such as Eugene Boudin (1824-1898), Gustave Courbet (1819-1877), Jean-Baptiste-Camille Corot (1796-1875) and Claude Monet (1840-1926). Normandy’s colours featured in an impressionist painter’s palette; misty greens of the wheat fields, blush pink and creamy white of the apple blossoms, softly mottled blues, mauves and lavenders in the fields and the shimmering golden haze over an orchard in the setting sun or on the sun flowers that blossom at this time, although they are sometimes overwhelmed by the extraordinary rainbow array of colours worn by the peloton.

Modern day knights without armour on man made steeds the riders and their incredible racing spirit and performance thrills both the local populace and the visitors who come from near and far to witness this stunning event and to urge their favourites on.

The peloton among fields of golden sunflowers – where is Van Gogh!

As we go online the popular Mark Cavendish from Britain’s Dimension Data team has already won three stages, with four of the first seven stages won by British riders who perhaps with Brexit’s result, have a lot to prove to their European neighbours with whom they have a long history.

One of France’s great hopes for success this year is the nine-man pro team of Ag2r-La Mondiale (Fra) while Italy has one to watch in the Nine-man team of Astana (Kaz) with leader Fabio Aru, supported by fellow Italian Vincenzo Nibali within weeks of the multiple grand tour winners being successful in the Giro d’Italia. After two days they left Normandy behind heading southwest into the lower reaches of the glorious Loire Valley, in central France where they were about to be bombarded by more cultural luxury, especially on Stage Four: Saumer to Limoges.

The latter became famous for its fabulous enamels in the Medieval and Renaissance periods and stunning porcelains in the nineteenth century, not forgetting, making wine casks for Cognac and Bordeaux production. Stage Five had everyone climbing up famous mountain passes the Pas de Peyrol and Col du Perthus from Limoges followed by a climb heading to Le Lioran and I could feel my own legs aching in sympathy with the riders, who fortunately are trained for this sort of thing.

Spectacular is not really a good enough word to describe how awesome it all was, especially when they had to race downhill at terrorising speeds.

Stage Six was back on the flat and saw a brief-but-intense trip through the Pyrenees and Andorra. Mark Cavendish made it three out of six stages when he won again in scintillating style.

Le château fort de Vieillevie a perfectly preserved world heritage site built in the year 1000, looked suitably impressive as a backdrop in the images of the race on this date. If you visit you can meet the squire, discover the castle including, the remains of a Romanesque church, its defences, carved decoration of great rooms with fireplaces, among the oldest in France.

Britain’s Steve Cummings certainly celebrated as he crossed the line to win a stunning solo stage seven victory at Lac de Payolle in the foothills of the Pyrenees on Friday July 8.

It had been another drama filled day with an inflatable arch 1km from the finish line deflated and collapsed by a spectator, which in turn caused a British rider to crash and require stitches to his chin. The next day during Stage 8 Britain continued its great run with their professional road racing cyclist Chris Froome leading Team Sky over the mountain from Pau to Bagnéres-de-Luchon although an altercation with a fan who came up to close and personal threatened to mar the event.

Seems amazing to me that some people let their excitement completely override their common sense, as its been proved time and time again terrible tragedies happen this way.

It seems extraordinary fans would want to harm the cyclists they claim to support. Pity they can’t fine citizens as well as the riders who react in fear of their lives. We didn’t see that one coming…

The incident came just days after governing body Union Cycliste Internationale president Brian Cookson commented “I don’t want to overstate it but ultimately we have a unique sport; it is a privilege to be able to get up close to the race and to the event. But people have a responsibility to respect that as well”.

Chris Froome wore the yellow jersey proudly following his on fire descent to take the stage so dramatically. His breakaway just before the descent started was an extraordinary ride, especially when he placed himself into an aerodynamic pose so he could pick up time.

The ride was brave and completely awesome. Stage 9 of France’s great adventure in cycling and design style, saw us still in the mountains with the peloton wheeling its way from Vielha Val d’Aran to Andorre Arcalis, a distance of 184.5 km. This would be the day Spain’s Alberto Contador pulled out, battling fever and still recovering from two crashes on the opening two days of the race.

Dutch professional Tom Demoulin led out and once he gained a gap, was gone setting up an advantage of thirty seconds, dramatically finishing the race battling hail in horrendous conditions as he crossed the finish line. This was yet another day with gendarmes failing in any attempt to keep some unruly people from running excitedly alongside the riders, trying to touch them as they tear by. Its a recipe for disaster in the making.

Chris Froome may not have won this stage, but he still holds onto the lead in his bid to win his third Le Tour de France. A winter wonderland, but isn’t this summer?

Monday 11th saw a rest day for everyone in a tiny kingdom where old stone streets and Romanesque architecture abounds.

This tiny independent principality with tax haven status is sited in the Pyranees between France and Spain, and remained virtually unknown since the 13th century, when French and Catalan sovereignty first emerged, its constitution only formalised in 1993. Wish I had packed my thermals…

As we sign off from this report, we are assured the highlight of this second week will come as riders ascend to the barren landscape at the top of Mont Ventoux. All I am left to ponder with the riding still ahead, who will mount that podium in Paris? So exciting is cycling!

The 103th Tour de France is made up of 21 stages and will cover a total distance of 3,535 kilometres. These stages have the following profiles: