Catherine II of Russia, Masterpieces from the Hermitage: The Legacy of Catherine the Great will showcase some 500 + great works until 8th November 2015, National Gallery of Victoria

The legacy of Catherine the Great (1729-1796) is celebrated with great pomp and circumstance and reflected in the Masterpieces from the Hermitage on show at the National Gallery of Victoria (NGV) until November 8, for all Australians and visitors to Melbourne to engage with and enjoy.

The State Hermitage Museum in St Petersburg is today is one of the world’s greatest museums, having grown from one wing of a building Catherine the Great created as her private domain, to being six buildings filled with the wonders of humankind.

They have been carefully chosen to reflect the changing nature of our world.

Innovation and vision go hand in hand and Catherine the Great was well able to assess the value of art in her time through its reflection of the evolution of civilisation and its social and cultural growth.

Her intellectual pursuits defined who Catherine II of Russia really was,

‘… one of the people who love the why of things’

We are invited to assess the works from The Hermitage at the NGV within the light and bright colour-filled and gilded recreation of a bold beautiful eighteenth century interior, much like Catherine and her peers right across Europe, England and in America would have enjoyed. 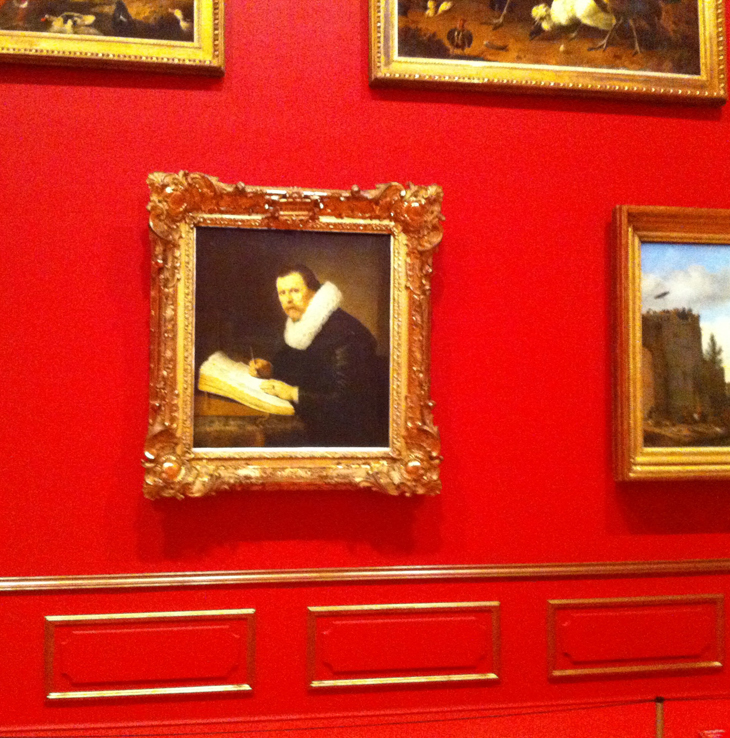 Rembrandt van Rijn’s superb portrait of a Scholar in its gilded frame set off so wonderfully by the rich red and restrained gilded backdrop which renowned English painter Joseph Mallord William Turner declared the only colour suitable as as background to showcase great works.

Collecting art for her took on a much higher purpose; she seeked to improve her countries own image abroad and also wanted to encourage her people to innovate, invent and imagine a very different future.

She also wanted to ensure her collection would continue her influence well into the future.

It eloquently tells the story of the child bride from Germany who led the Russian people into the European modern age.

She is known to have said “I am building, I will build, and will encourage others to build”.

Catherine II certainly encouraged Russian artists and manufacturers to look beyond their own borders at countries like France, where intellectuals were raising eyebrows and challenging entrenched ideas.

She admired the brilliant progressive achievements of the English, which were being fuelled by the seeming success economically of the Industrial Revolution and, she particularly liked English country house garden style. Dr Mikhail Dedinkin, Deputy Head of the Western Art Department State Hermitage Museum St Petersburg at the NGV with the portrait of Catherine the Great by Alexander Roslin

Her passion for Anglo Chinese fashion also meant that Chinoiserie interiors became a feature at Tsarskoe Selo, the summer retreat of the rulers of Russia where many great events took place.

A strikingly unified Baroque styled ensemble of palaces of extreme exuberance in style, in the gardens she commissioned a marble bridge based on the designs of sixteenth century Italian architect Andrea Palladio.

It was inspired by a trio of such bridges in gardens across England, where renowned eighteenth century landscape gardener Capability Brown worked, including Wilton House home to the Earls of Pembroke since the 1540s, Prior Park and Stowe House

During Catherine’s lifetime the French Revolution (1787-1799) ruptured the prevailing aristocratic way of life through the enlightened arguments of the philosophes.

Their ideas spread through the ‘educated classes’ in salons, drawing rooms and in the many ‘societies of thought’ established at the time.

The works Catherine gathered around her included an early sixteenth century work from the school of Leonardo Da Vinci. It is a female nude, a woman of great character who boldly gazes directly at us perhaps challenging us to know ourselves and giving us cause for reflection. The painting looks very like the enigmatic Mona Lisa by Leonardo da Vinci to whom it was attributed for more than a century. However it is now known to have been completed by assistants in his studio, also known as the School of Da Vinci. Artist Jean-Baptiste Simeon Chardin (1699-1779), known and admired by encyclopaedist and philosopher Denis Diderot, provided posterity with images of domestic realism with a focus on morality.

During this period in France men were scientists and thinkers and despite having divergent personal viewpoints, Chardin with his imagery managed to engage and empower the population across France to question the world around them.

His work The Laundress (1730’s) is an exercise in thoughtful reflection, one where the viewer is invited to consider their own options in life in relation to the subjects. This happened in well-equipped reading rooms or the intimacy of the salon, where friends gathered to openly to question standards of living and how the structure of society should be reformed.

French painter Jean-Baptiste Greuze (1725 – 1805) focused his works on subjects of both melodrama and morality. 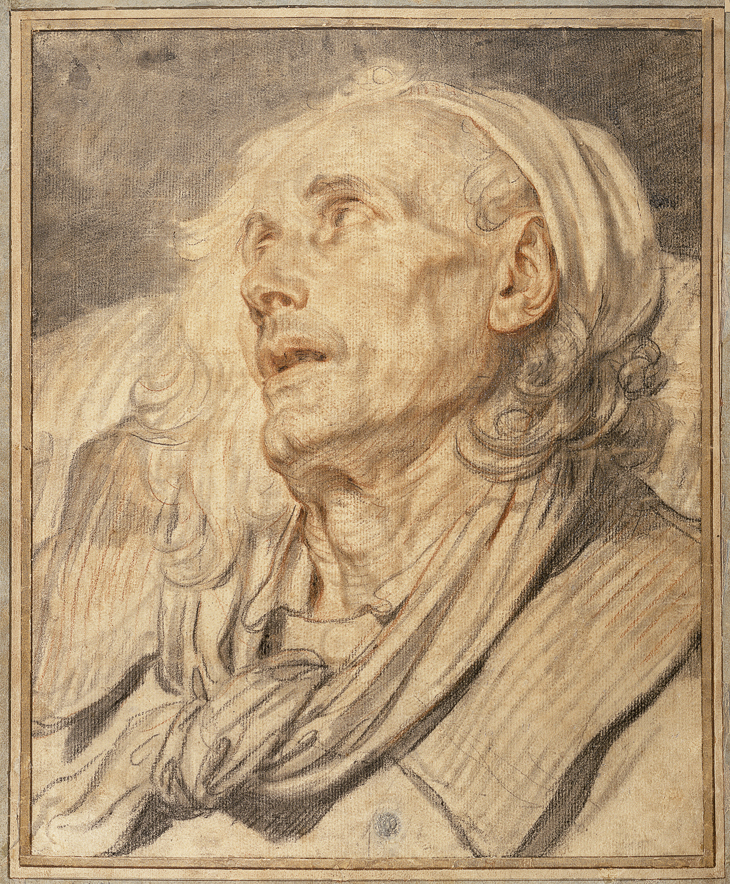 By the time of the French revolution they had gone out of fashion.

A master of drawing, his Head of an Old Man gives us an insight into his great technical gifts.

The world was changing rapidly and while Catherine may have agreed with the French philosophes in both theory and principle, she still basically failed to implement reforms practically in Russia.

Among many of her wealthy and powerful countrymen, the feudal mentality still prevailed.

She knew that in order to keep the peace she must pander to the authority of the nobility who would only keep her people in work if they flourished.

She manipulated the system and was praised for her considered generosity and caring nature.

It includes pen and black and brown ink washes, drawings by architectural masters such as France’s antiquary, artist and architectural draughtsman Charles-Louis Clerisseau (1721-1820). Charles-Louis CLÉRISSEAU, French 1721–1820, Design for the paintings in the cell of Father Lesueur in the Monastery of Santissima Trinità dei Monti in Rome, 1766–68, pen and black and brown ink, brown and grey wash, The State Hermitage Museum, St Petersburg (Inv. no. ??-2597), Acquired from the artist by Catherine II on 5 May 1780, Provenance: before 1797

A teacher of architects in the neo-classical style, Clerisseau was a vital and important link in the chain of architectural excellence that prevailed during the eighteenth and nineteenth centuries in England and Europe. Carlo GALLI-BIBIENA, Austrian 1728–87, Design for the interior decoration of a library (1770s), pen and ink, grey wash and watercolour over pencil, The State Hermitage Museum, St Petersburg (Inv. no. ??-231) Acquired before 1797

Scottish born London based architect Robert Adam who was a master of the neoclassical style (1728-1792), noted on his Grand Tour of Europe that he was at Florence so that he could meet a ‘most valuable and ingenious creature called Clerisseau, who draws ruins in architecture to perfection’

“I have found a gentleman who I am to carry to Rome with me, who will put me on a method of improving myself more in drawing and architecture than I ever had any ideas of’. He took a liking to me”.

He gained a bonus in that Clerisseau also gave him knowledge of the antique, taught him the craft of watercolour and, as he said himself, ‘he rais’d my ideas, he created emulation and fire in my Breast, I wish’d above all things to learn his manner and to have him with me at Rome, to study close with him and to purchase of his works’.

Both Peter and Catherine the Great in the great building works completed at St Petersburg engaged many of Clerisseau’s contemporary Italian architects to complete their vision for the city. A Pen, ink and watercolour work by Giacomo Quarenghi (1744-1817) reveals the Façade of the Hermitage Theatre designed in the 1780’s. Her patronage of all the arts and the Academy of Sciences was valued and she founded over four cities a year throughout her reign.

She died near the end of 1796, the year the Qianlong Emperor of China stepped down to make way for his son the Jiaquing Emperor and just after Napoleon Bonaparte had arrived at Nice to take command of the Army of Italy.