“A life is like a garden. Perfect moments can be had, but not preserved, except in memory”. So stated poet, photographer, performer and director Leonard Nimoy (1931-2015) in his final tweet to the world.

Leonard Nimoy has ridden in his last space ship into the sky to become a forever-twinkling star on the firmament of the universe. Now there will be many theories evolved about why his most famous character was so popular.

Nimoy won everyone’s hearts as the pointy-eared Mr Spock on the Star Trek original television series. First created by Gene Roddenberry, it was in production 1966 – 1969 and then cancelled after only three seasons, while having an enormous impact that would grow and last all the way through until today. Over the years it quietly became a cult phenomenon. slowly evolving into one of the biggest science fiction entertainment franchises, spurning many other sci-fi shows and focusing our attention on the universe.

Spock’s appeal for me as a young woman, having being just married at the time and a huge fan of the TV series, was that he was an odd man out.

He didn’t know it but we had a connection because it was often how I felt. Then for me there was also his voice.

Great voices can resonate long and loudly and in lofty places and as Mr Spock Leonard Nimoy’s was indeed impressive.

Apart from his unusual appearance Spock had a courageous commitment to his own belief system, which went to the heart of both his moral and logical self and was admirable.

Spock’s obsession with logic struck many chords and it was interesting to think the ‘father of logic’ Greek philosopher and scientist Aristotle (384-322 BC) , who presented the theory that all logic revolves around one notion: deduction, would have enjoyed to have debated it with Spock.

Captain Kirk aka William Shatner didn’t, and back in the day when they both lit up our screens together they were a dynamic duo on screen while off screen, were reported to be having difficulties. Spock’s cool rational nature was the perfect counterpoint for Kirk’s emotional heart over head approach that meant he constantly met morphed them into all sorts of trouble that Spock sometimes had to extricate them from.

They certainly provided research students of psychology disciplines at university with great personality characters to get their teeth into. My three sons were born in 1968, 1971 and 1973 and grew up in the ‘space age’ watching rockets racing off to the moon and enjoying the notion of being Trekkies. They also struggled to learn the ‘two-fingered Vulcan salute’, which Nimoy developed as elements of his own character.

By the time the Star Wars phenomenon broke in 1977 followed by Star Trek; The Motion Picture in 1979 and all the others that followed my sons were, as I was, completely hooked.

They watched the daytime re-runs of Star Trek on TV from toddlers to teens. They loved everything to do with the show and with space travel in general. Telescopes pointed skyward and space parties were integral to the family growing up experience as they collected memorabilia and immersed themselves in the universe.

There is no doubt like all young boys of their time, they developed a real affection for the characters of Spock, Kirk, Scotty, Sulu and McCoy and that would continue each decade of their growth to adulthood all the way through to today. We all need to know how to appreciate the way in which friendship, pleasure, virtue, honour and wealth all fit together providing us with a holistic approach to the life we are seeking and these guys certainly helped.

Practical wisdom conceives it, emotional and social skills embolden it and expanding our knowledge help us to understand it.

By sharing with others we put into practice an art of wellbeing one that is supported by reason. It’s all about new age enlightenment.

It is no coincidence America’s President Obama who is my eldest son’s contemporary commented, on the passing of this particular actor.

“Long before being nerdy was cool, there was Leonard Nimoy…Leonard was Spock. Cool, logical, big-eared and level-headed, the center of Star Trek’s optimistic, inclusive vision of humanity’s future. I loved Spock” President Obama said. Leonard Nimoy as Mr Spock in Star Trek the Movie (2009)

When Leonard Nimoy became an elderly Spock we all cheered when he featured in the new reboot movies, providing a physical link from the past to the present and future. As my youngest son remembers, Spock was all about peace and prosperity. 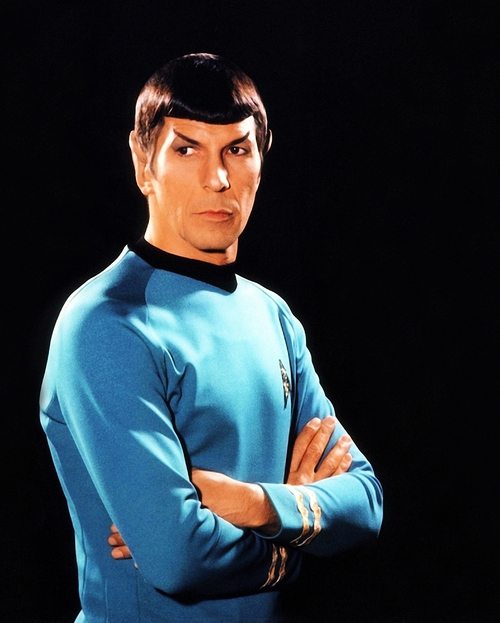 Leonard Nimoy gained the attention of Gene Roddenberry when he was casting his risky sci-fi series in the first instance, following his roles in Dragnet and the Twilight Zone popular TV shows too.

Leonard Nimoy and William Shatner became stars overnight when the show started. Shatner said in his book, Up Till Now: An Autobiography. “I was supposed to be the star, but Leonard was getting more attention than I was. It bothered me.”

Despite the show’s cult popularity, Star Trek closed down production and was taken off the air by 1969 because back in the day the moguls thought they knew everything.

They were not listening to the ratings or the voice of the people or the fact that the whole idea of Star Trek plugged into their dreams of a better future for all.

Like many good actors of his age Nimoy received an education in which the spoken English language was very important.

Wanting to be an actor from when he was a young boy as an adult when he was on screen it wasn’t just those pointy ears that had you listening to every word he said. His annunciation was glorious.

While he would have many other roles throughout his career for Leonard Nimoy however, it was Spock who became his nemesis. He wrote two biographies denying and accepting his fate.

Leonard Nimoy then transposed to the television series Mission Impossible for a while and during the 70’s went through challenging times.

He and William Shatner it is reported, had an on again off again relationship that mellowed as we all do with age.

When he died on Friday February 27th 2015 Shatner is reported to have said “ I loved him like a brother – we will all miss his humor, his talent, and his capacity to love.”*

When Star Wars became a blockbuster hit again and fans of American sci-fi demanded more. He reprised his role as Mr Spock in 1979 and 1982 and directed the third and fourth instalments in 1984 and 1986.

His biggest triumph was reprising Spock yet again in 2009 with JJ Abrams reimaging of Star Trek and in 2013 with Star Trek Into Darkness. It was also good to see him pass the baton to Zachary Quinto, who seems a natural successor to the man who, while trying every form of action tempered it with the maxim of ‘nothing in excess’.

There is no doubt Quinto has to date played Spock with exceptional grace and versatility setting small store by his own gratification. He is also bringing an inherited wisdom and gravitas, a sense of responsibility to the role.

LLP – live long and prosper in paradise Leonard Nimoy, Mr. Spock has got your back. You were and will always be our friend.