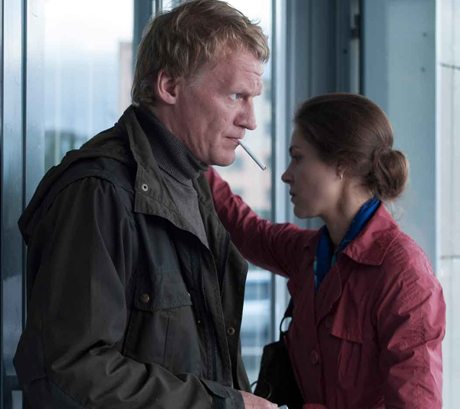 Creating an environment, which will protect, nurture and benefit the well being of society at large can seem like an impossible task at times for people on a personal level, or on a political level as well.

Throughout history humankind has fought many battles, but as yet we have still failed to win the war against individuals who seek to impose their self-serving agendas on others through violence and force.

Black humour, love, tragedy, moral decay, jealousy, judicial nightmares, feudal power plays and patriotism are aspects of Leviathan, a film that is a complex examination of human lives in Russia today that is coming to Palace Cinemas, Australia in March, 2015.

Director Andrey Zvaginstsev ensures we are squirming at times, as we empathize with the adults who find themselves unwittingly, and unwillingly part of dreadful events over which they have no control.

Above all we feel their lack of hope in a story that in reality could happen anywhere. Alexey Serebryakov as Kolya in Leviathan, soon at Palace Cinemas

Leviathan is a word synonymous with monsters, and in this case it is the Russian state, a complex institution in which corrupt officials, cooking the books and stealing from it seem integral to the system.

The film was 2015 Winner of the Golden Globe Award for Best Foreign Language Film, Winner of the Prix du Scenario at the 2014 Cannes International Film Festival and Nominee for both 2015 BAFTA and 2015 Oscars, Academy Awards.

It also won Best Film in three festivals as well as the Asia Pacific Screen Award for Best Film. With these credentials understandably there is a great deal of attention surrounding its release on the big screen here in Australia – be aware spoilers follow.

This serious dramatic ‘art’ movie is intended by its Director to be a parable of our times.

Make no mistake this is a terrible tale of torture, suffering, rage, resentment and violence that paints the characters of its people in an unflattering light. Zvaginstsev is meticulous in his detailing, intent on making his point about how everything we hold dear can and will end up being eroded or eaten away more quickly than we can possibly imagine, especially if we are not mindful of learning how to appreciate, value or cherish what we have.

Vadim (Roman Madyanov) is a thoroughly obnoxious completely corrupt local Mayor of a town in Russia on the shore of the Kola Peninsula on the Barents Sea coast. He has a portrait of his hero, its president above his desk.

He is trying to evict one of the locals from his home with the aid of the local police and courts. He wants it for his own purpose.

The target Kolya (Aleksey Serebryakov) is a small time mechanic whose friends seem to only like him for his talents and how they can be turned to their own advantage.

He lives life with his attractive second wife Lily (Elena Lyadova) whom he loves unconditionally and troubled teenage son Roma (Sergey Poikhodaev) from the earlier marriage, not far from the seashore of which they have a view. 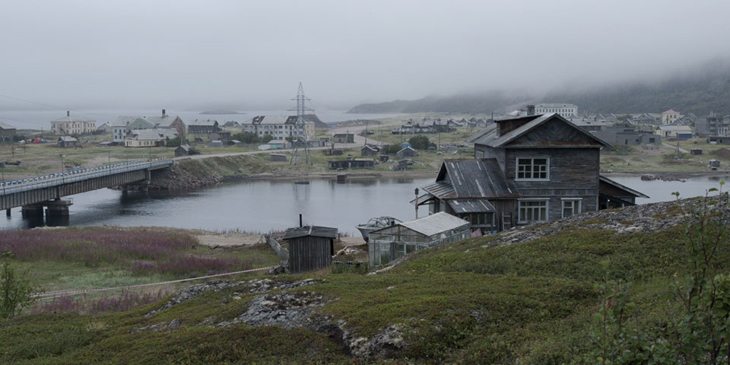 The land surrounding where he lives is in decay and desolation, rotting boats, rotting corpses of sea life only adding to a bleak atmosphere of erosion and despair, spotlighted perhaps by a promise of yet more to come. This is a place where the idea of a rule of law seems to have been completely abandoned, serving only its corrupt masters.

Kolya is offered only a pitifully small compensation payout for his property. He believes the local mayor Vadim wants to build himself a luxury mansion on the site of his house, and so decides to fight him in the courts.

He believes that he knows he has right on his side in his fight against his property being falsely repossessed.

The extraordinary opening scene has a member of the judiciary rapidly reading out in a deadening monotone voice a ruling in favour of the local Mayor against Kolya.

The way it is delivered is menacing to say the least. 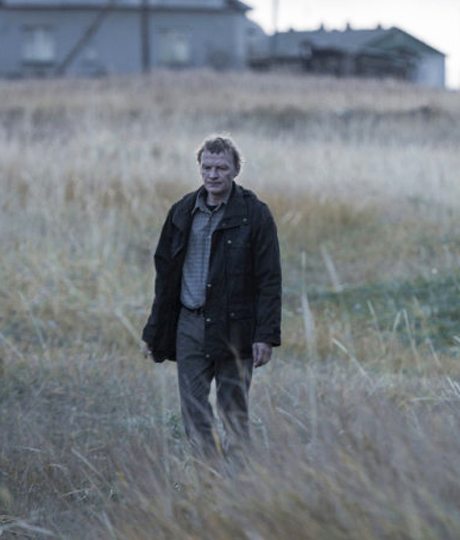 Kolya’s rambling timber house is set on a reasonably large parcel of land with associated sheds and outbuildings.

The house has been in his family for generations. Despite his handy industry and maintenance, it all has an air of sadness and suffering about it that seems to be intrinsically infused within its fabric.

The furniture is a mixture of old and new, highlighting country practicality and functionality. Around a large aged kitchen table the small family share meagre meals and confidences with each other and their friends.

All the actors turn in outstanding performances. They make us believe their character’s lives, like so many others of their age and circumstances, are indeed challenging on every level. We also understand they can be ended at any point and without much impact on anyone else’s conscience.

An ability to be patient and to accept the status quo of the local and an even larger bureaucracy without complaint is a fait accompli, reflecting an atmosphere of a place where a belief in hope is all but unknown.

The family enjoys some lighter moments, as do we all, especially father and son. They are at times playful or completely at odds with each other and their seemingly awful life.

The difficulty for me was at dealing with the ‘drinking’, which is overpowering at times, sickening in the extreme. Russians have a reputation for being hard drinkers, but nothing really can prepare you for watching this group of adults imbibe Vodka, putting it away like cyclists drinking water on the Tour Down Under. It is awful.

The extraordinary thing is that no matter whether they are police officials or no, they all get into their cars to drive where they are going without a thought for anyone else.

This alcohol fuelled state also leads to the men on a supposed family outing, shooting weapons off at will, at first using as targets a row of bottles of which they have a plentiful supply.

When they run out, portraits of former Soviet leaders will do on this picnic whose outcomes will end up defining all their lives. 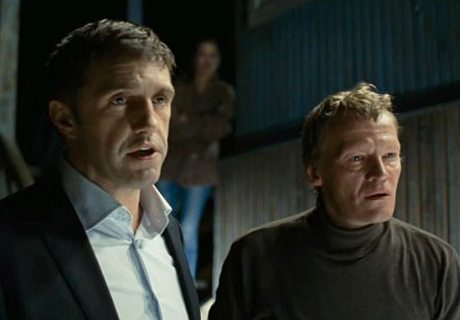 Kolya’s handsome friend and lawyer dressed in a suit and tie is the only sophisticated element about this movie. From Moscow Dmitriy (Vladimir Vdovichenkov) arrives in town with a quiet promise to help his friend fight the unrelenting Vadim in court so that he will be able to keep his family home

Dmitry is dashing to a point in that in his arrogance he believes he has the mettle of these local thugs, having completed a research dossier on the mayor and his activities before arriving, one he will seek to use if things go wrong.

In the meantime he lures the lovely Lilya his best friends wife into bed. She concedes because anything that would take you into another realm where you could forget the hopelessness of your life for even a few moments in time, seems desirable.

Dmitry like so many before him completely underestimates Vadim and his propensity towards violence. He does not realise he may turn out to also be the prey before it is nearly far too late. However only given a warning because of his important Moscow connections, he flees without a backward glance for Kolya, his former friend. Despite Kolya forgiving her, the focus turns to Lily who is confused and Kolya’s tormented teenage Roma.

He is a boy in trouble anyway. Now he’s full of resentment too because he knows what his stepmother has done. Betrayal at every turn.

He spends most of his evenings in the ruins of an orthodox church with other young adults learning how to drink hard, although you gain the impression that for him it is only a form of escape from the lack of hope he rightly feels.

Perhaps not really a choice he would otherwise make.

The Christian Orthodox church priest Mayor Vadim consults does not come off well either.

He not only advises Vadim on spiritual matters, but also encourages him to use his power of his office to achieve what he wants, feeding his narcissism with his own. This ensures that events end as they both want.

We are left with the sight of a bulldozer destroying the house.

Kolya’s wife the lovely Lilya has been permanently removed, we are unsure whether it is suicide or not, but there is a lot of evidence dredged up by Vadim against Kolya.

This successfully puts his Kolya into gaol, convicted on false evidence of Lily’s murder. As he enters the rusting gates we know he will stay in gaol for the rest of his natural life. His lonely son Roma is left alone to ponder on a Leviathan: a monstrous skeleton of a whale washed up on the seashore.

His father’s friends arrive to take him in. They are Judas figures, both informing on his father.

We are left knowing they will receive state benefits for offering him a home.

The boy is indeed a victim of more than one horrendous crime.

Then there is the priest’s chilling delivery of a rousing sermon at the climax of the film. This takes place in the richly glittering gilded surroundings of an all-new Orthodox Cathedral, which we slowly realize has been built on Kolya’s land.

Leviathan is as bleak a commentary on the truths attached to Christianity as the wasteland that surrounds it and the people who worship in the building. And yes, the mayor Vadim is there with his family.

The recently revived moral high ground of orthodox Christianity has indeed seemingly fled this ‘barren’ land, twisting the gospels for gain. All I could think is that perhaps even Jesus himself would have a hard time forgiving their failures.

This film is about the fate of just a few citizens among millions. Basically they are un-regarded, not respected or valued in an way.

The Director’s point is well proved, that the state and its failed system may be the biggest monster of them all.

On our You Tube Channel you will find our mini-documentaries, which provide an insight into the evolution of art, design, music, fashion and style.