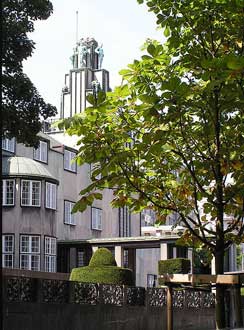 Austrian architect Josef Hoffman (1870 – 1956) was a rare individual, who could design in many mediums. He created a sense of ‘liberated living’ when he completed the Palais Stoclet at Brussels between 1905-11.  It has been described as a ‘flawless masterpiece of a thousand years of architectural history’. Harmony governed every facet of his work of art that was an ambitious accomplished achievement of the arists and artisans of the Wiener Werkstatte, (Vienna Workshops), founded by Hoffman in 1903. A strange astonishing edifice, if from another planet, it exemplified in embryo the coming Art Deco movement and became one of its great founding monuments. It was a Villa built for a private financier who loved the arts and gave his designer free reign.