Crowd-pleasing movies tug at the heartstrings, although perhaps not as strongly compelling for quite a while as the Australian produced film LION, which completely took me apart.

LION tells an amazing tale about a lost young child in India, who as an adult takes a voyage of the heart to find his way back home. A deeply affecting true story vast in scope and intimate in delivery, the brilliant adaption for screen LION by Luke Davies, is from the book A Long Way Home by Indian born Australian businessman Saroo Brierley about his life.

The film is directed with gentle sensitivity and great skill by Garth Davis who keeps LION cracking along at such a pace in the first hour, that I found myself forgetting to breathe.

Featuring British born award-winning actor Dev Patel as Saroo Brierley, since debuting at the Toronto International Film Festival 2016 in Canada, the film has won many accolades. Dev Patel and Nicole Kidman have also both been nominated for Screen Actors Guild Awards for this engrossing story about tragic loss and the optimism attached to hope. Sunny Pawar who plays the young Saroo Brierley in LION

The youthful bright-eyed Sunny Pawar as a young Saroo steals every scene he is in, setting the stage for the brilliance of Dev Patel as an adult Saroo Brierley, who not only nails an Aussie accent perfectly, but also endears his character to everyone. Saroo is only 5 when he is adopted from a Calcutta orphanage to be raised by adopting parents Sue Brierley (Nicole Kidman) and John Brierley (David Wenham). This was when he became part of a statistic of 80,000 children who become lost or orphaned each year in India.

Sunny Pawar who plays the role of the five-year old Saroo entirely captivates, ensuring the audience invests all their emotion into the plight in which he finds himself. Wide eyed and resilient and with the ability to convey without words, the most extraordinary degree of inner strength. His performance is valiant, the Director based on his role alone, has done an amazing job of inspiring such an incredible performance. If only there was an Oscar for such tiny actors!

Saroo came to live in Australia, surrounded by the beauty of the setting of the city of Hobart in Tasmania, a gentle place in which to live and as far removed from the life he had formerly known, as you would find.

His new mother Sue and her husband John decided not to have children of their own, seeing it as a selfish act when there are so many unwanted children in the world in need of their, and indeed all our help.

They don’t just adopt Saroo, who has one year alone with them before his new brother another very broken child also from India named Mantosh (Keshav Jadhev) arrives. Mantosh (Divian Ladwa) has not survived his ordeal by keeping his optimism as intact as Saroo has done, but has suffered such an enormous trauma that will affect all their lives until he can conquer his own demons as an adult.

Saroo Brierley despite adjusting well to his new surroundings, doing well in his studies over the years and while enjoying every moment of his growing up ‘down under’, has also never been unable to forget his real and very loving family back home in India.

Saroo has his memories triggered when he encounters a plate of Jalebi, a sweet dessert popular in India at a party he’s attending. It’s a treat his brother had always promised him as a small child.

After talking to some of his friends at University about what he remembers, he then follows a suggestion to use Google Earth to begin tracking down the family he became separated from when at five years old he became lost. Encouraged by his girlfriend Lucy (Rooney Mara) he sets about looking for his home village in the vast landmass that is India, which can only be likened to looking for a needle in a haystack.

Following a disparate bunch of scanty clues and remembered childhood words, Saroo is hoping against hope he will find his mother again. Now as an adult he can finally imagine the pain she, his brother and baby sister must have suffered because of his loss.

Although the family he can only just remember have become a distant childhood memory over time, they begin to take over his daily thoughts to a point of obsession. 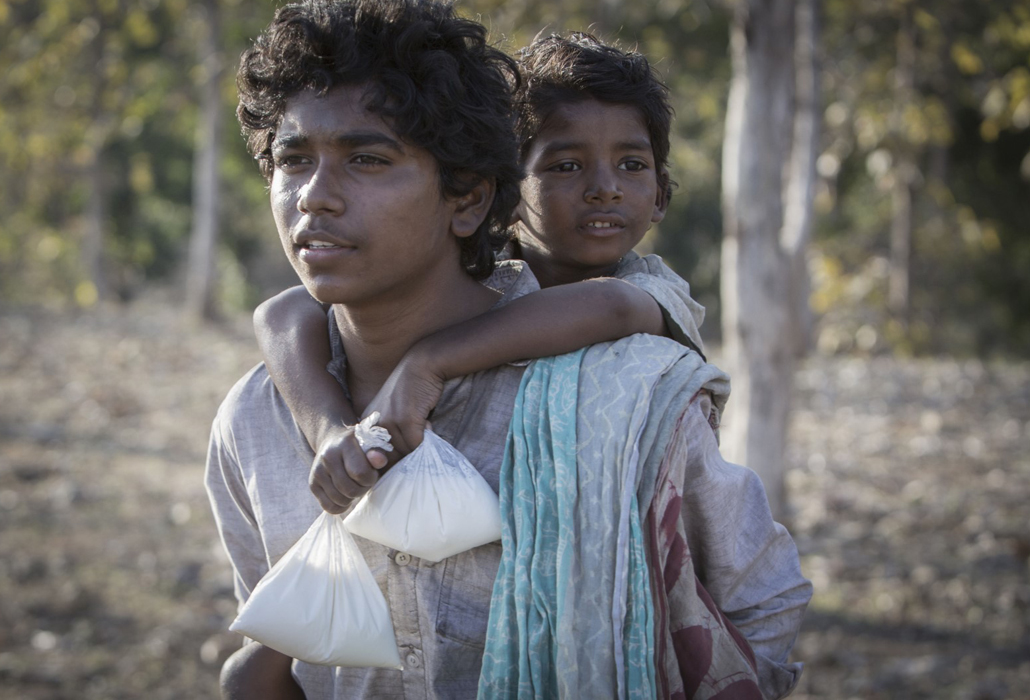 As one of the two men in the family with his older teenage brother Guddu (Abhishek Bharate), also a fine performance.

Saroo and Guddu spend their days together on the hustling’s as they both endeavour to help their mother Kamla (Priyanka Bose)  who moves rocks for a living, keep food on the table.

They do this by performing many jobs including one that has them leaping on and off moving trains to retrieve bags of coal to sell to a local merchant. 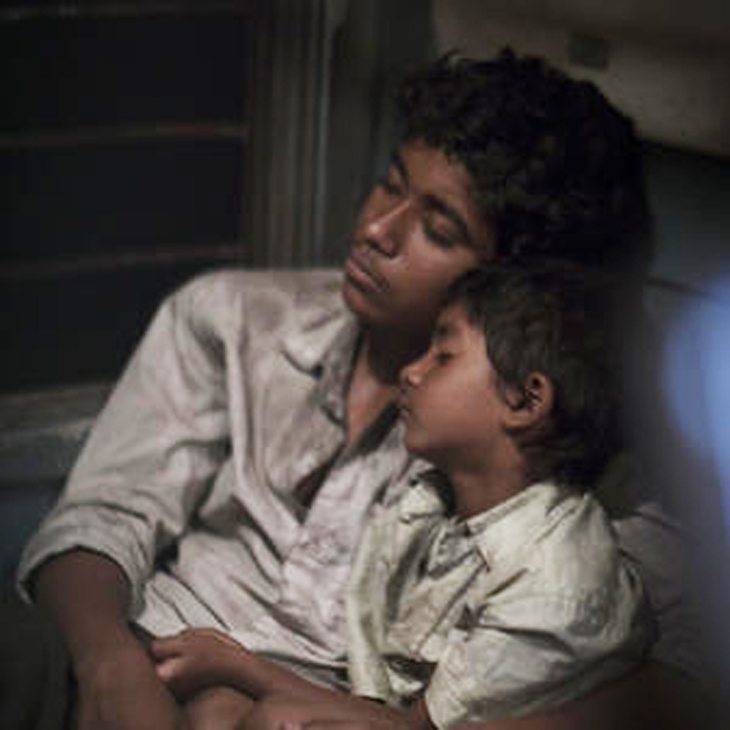 One night Saroo insists on going with his kind and loving brother Guddu to take on night work as well.

However when he falls asleep on the job Guddu realises his mistake in bringing his young brother along and leaves him on a railway seat to sleep, telling Saroo he will come back for him.

When Guddu fails to return, Saroo climbs into what seems like a deserted train to sleep in safety on its seats. When he wakes he finds himself in a moving train that is now miles away from his home. He is locked in until it reaches its destination, Calcutta some 1600 miles away.

The dangers he faces when he arrives in such a big city are very real, but at five he has a strong survival instinct that serves him well when a friendly woman who offers him kindness, a bath, food and a fizzy drink picks him up.

A male friend of hers arrives to check him out and still young and innocent he somehow realises something is very wrong and runs far away when he hears she is being paid for finding him. Sunny Pawar as Saroo, surviving on the streets of Calcutta in LION

Surviving by eating food offered to the Gods, he’s picked up again by those rounding up orphaned children on the streets.

The young girl he befriends warns him that they are in a bad place, where children disappear in the night never to be seen again.

Luck is with him though, his being so young means he fits the criteria to be adopted internationally. One day a lady comes to tell him about his new family and to help him to get ready to travel abroad.

She teaches he and a small band of chosen children words of English to get them by in their new home.

Wearing a T Shirt saying Tasmania, he’s also treated to his first ride on a jet plane. We remember what it was like to have our first ride on a plane too, such is the delight and awe on Sunny Pawar’s face. The real Saroo Brierley author and businessman with Sunny Pawar and Dev Patel who play him as a 5 year old and adult respectively in LION the movie, 2016

LION is truly majestic, just like India itself and its people. Wonderfully profound, this stirring storytelling is entirely moving infused as it is with both the extremes of despair and charm.

I went to see this gem early on New Year’s Eve, along with a packed out preview that saw many people sitting for a long time in their seats when it was over, no doubt trying to get their own equilibrium back for their own journey home.

This is indeed a movie about people you would not have ever heard of had Saroo not written his story down. It is particularly poignant surrounded as we are in our land of plenty.

The music in particular is outstanding, superbly matched to the tale and integral to its telling.

When Saroo finally finds the village he grew up in you feel ever moment of his joy as he walks the same familiar streets he used to run along as a child on his way back home. Dev Patel as Saroo and Priyanka Bose as his mother in LION, 2016

As he finally greets his now ageing mother, superbly brought to life by Indian actor Priyanka Bose who exudes goodness and grace, you share in his elation.

Saroo’s dedication to finding his first family, but not at the expense of the Aussie family he loves, reveals that his heart is big enough to embrace and celebrate them both.

I must say that I felt very privileged to have shared Saroo’s memories, his journey and his joy.

Visiting Canberra to view the Treasures from Versailles at the National Gallery of Australia, on my way to Sydney for Xmas, was an encounter of the richest kind