This morsel of man I’ve held –
What potency it has,
Though strengthless still and naked as
A nut unshelled! *

The Bodleian Libraries at Oxford in England hosted a special one day symposium on the 30th October 2012, to celebrate the generous gift of an archive of papers that once belonged to the scholar and Anglo Irish Poet Laureate of the United Kingdom (1968-1972) Cecil Day-Lewis CBE (1904-1972) and his 2nd wife actress Jill Blacon (1925-2009). They were donated by the children of his second marriage, Tamasin and Daniel, following their mother’s death. Apart from letters and manuscripts dating from 1968 until his death in 1972, correspondence includes letters to and from such giants of the theatre and literary world as Sir Kingsley Amis, Dame Peggy Ashcroft, W. H. Auden, Sir John Betjeman, Sir John Gielgud, Robert Graves, Sir Alec Guinness, Christopher Isherwood, Philip Larkin, Sir Stephen Spender all of which are included in the valuable gift. When C Day-Lewis was named Poet Laureate in 1968 the headline on The London Evening Standard read ‘A Swinging Laureate for the Swinging Sixties’. Today an official ‘C Day-Lewis Website‘ worked on by Jill Blacon before her death, and now maintained by admirers, contains the full texts of some of his best known poems.

Cecil Day-Lewis was a talented, witty and humorous man, who wrote parodies on other poets ranging from Thomas Hardy (1840 – 1928) to Dylan Thomas in An Italian Visit (1953). He was not just a poet, to supplement his income and ‘to put butter on the bread provided by poetry’, he penned some twenty-one crime novels as Nicholas Blake, his pseudonym. The fictional character of ‘Home Secretary Nicholas Blake’ in the popular British TV Series Spooks was named for Day-Lewis’s alter ego. His ‘mystery’ stories, except for four, featured a fictional gentleman detective who was a would-be poet, the dishevelled and shortsighted Nigel, Inspector Strangeways (also the former name of a prison at Manchester),  C. Day-Lewis also wrote two children’s novels Dick Willoughby (1933) and The Otterbury Incident (1948). Back in the day - Cecil Day-Lewis with W.H. Auden and Stephen Spender - 'Poets of the 30's'

Some of his four children have gained a fairly high profile of their own. Daniel Day-Lewis is a double Academy Award winning actor admired and known for his brilliant betrayals of both fictional characters and men of history. He will portray Abraham Lincoln for Steven Spielberg in a movie simply titled ‘Lincoln’ to be released in November 2012.  His daughter Tamasin was a director and documentary filmmaker and has carved out a niche as a well-regarded television chef in Britain. Tamasin also writes for the Daily Telegraph, Vanity Fair, Vogue and Food Illustrated and has written numerous cook books. She is on the Board of Governors at the Bristol Old Vic Theatre School. His son Sean by his first wife is a well known journalist at The Daily Telegraph in England and his son Nicholas, from whom the first name of his father’s pseudonym sprung, keeps a low profile. Talking about why they chose to bequeath their father ‘s papers to Oxford’s Bodleian Libraries, Tamasin and Daniel announced:

‘We are thrilled that our father’s manuscripts are going to be housed at the Bodleian and certain that he would have been honoured and pleased that they had been accepted. Oxford played an important part in our father’s life. If the manuscripts had ended up outside the country it would have saddened us all as a family as the poets who became papa’s lifelong friends and peers all met up at Oxford as undergraduates. We know that future generations will now have easy access to the manuscripts for research, scholarship and the simple joy of seeing how a poet worked at a poem; the pit-face of the pen and its scratchings out and correcting, shaping and forming, in what is the most succinct, spare and specific form of writing in terms of both meaning and use of language.’ 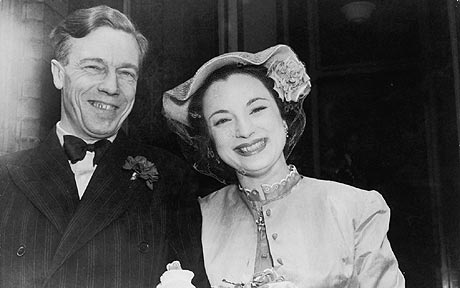 Wedding of Cecil Day-Lewis to his second wife Jill Balcon

Born in Queen’s County (County Laois) in Ireland, Cecil Day-Lewis was educated at Sherborne School and Wadham College Oxford and was part of the circle surrounding another brilliant English poet W.H Auden during the 1930’s. It was in the Fifties that Day-Lewis found the height of his fame. An Italian Visit (1953), Pegasus and Other Poems (1957) meant major headlines and his detective novels popular and admired.  He was also a distinguished broadcaster on the BBC, reading his own and others’ poetry.

It was in 1951 that he defeated CS Lewis and became a Lecturer and Professor of Poetry at Oxford and then went onto be appointed UK Poet Laureate in 1968. A radical in his youth and a member of the communist party he sang their tune for a very short time (1935-38). However disillusioned he left, and in his autobiography, Buried Day (1960), renounced his communist views.

Daniel and Tamasin’s mother Jill Balcon was an actress on film, radio, and the stage known for her voice, ‘a rich, expressive, finely modulated instrument’ in the words of Peter Stanford, and for verse-speaking. Cecil Day-Lewis and Jill Balcon shared a love of poetry and frequently gave readings together. After Day-Lewis’s death Jill Balcon continued to read in public and promote her late husband’s work.

During the symposium Tamasin Day-Lewis discussed the life and work of her father Cecil Day-Lewis with known scholars of English literature today. 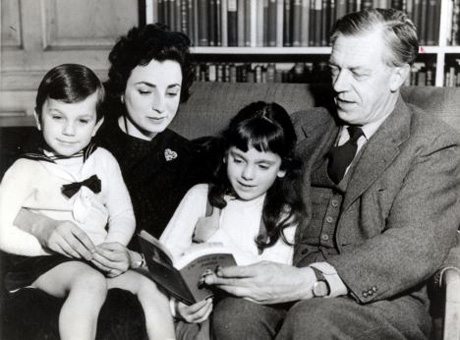 Participants also had the opportunity to listen to recorded readings of Day-Lewis’s poetry by her mother, who continued to support his work following his death.

There was also a live reading by actor Gabriel Woolf. Photographs, manuscripts and correspondence from the archive, never seen in public before were on display throughout the event. David Whiting, Co-literary executor, Estate of C Day-Lewis and Jill Balcon:

‘The family papers now given to the Bodleian encompass the wide ranging work of Day-Lewis not only as poet, but as novelist, critic, academic and public servant’

The extensive archive is a kind of microcosm of Day-Lewis’s professional and private life encapsulated in a short period of time amd offers a real insight into his world and that of his wife Jill Balcon, via their correspondents from EM Forster to Alec Guinness.

There are amongst much other material, manuscripts and typescripts of Day-Lewis poems, and the detective fiction, which was written under his alias of Nicholas Blake, much of which is now also being republished. Currently occupying fifty four archival boxes, the collection includes: letters to both Cecil Day-Lewis and Jill Balcon; letters and papers regarding the award of the Poet Laureateship; correspondence with publishers; manuscript and typescript working drafts of poems, lectures, essays, television and radio scripts, and readings; printed items (including articles, awards, and ephemera); audio/visual material (including recordings of readings, dramatizations, and interviews); also some manuscript and typescript drafts of the later detective novels written by CDL as Nicholas Blake. The letters will be sure to be both welcome and precious gifts, with the art of letter writing now in serious decline and the great days of a pride in prose desperately in need of a Renaissance.

‘We are really delighted to add this important collection to our growing holdings of modern literary papers.   The family has been extremely gracious and generous and we are delighted to be holding this celebratory event in honour of Cecil Day Lewis and Jill Balcon.’

Shall I be gone long??
For ever and a day?
To whom there belong??
Ask the stone to say?
Ask my song 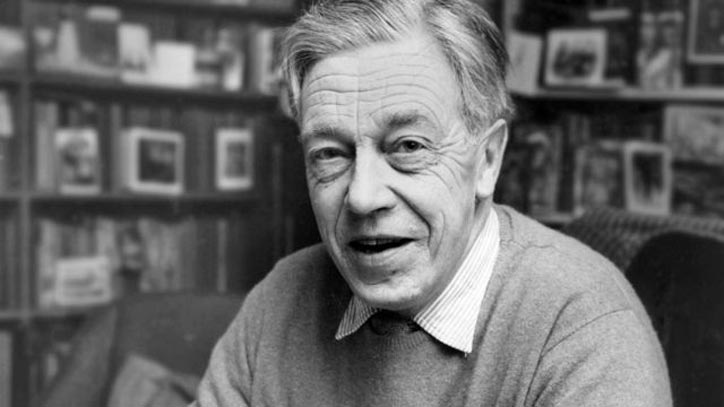 About the Cecil Day-Lewis Day at the Bodleian – Program: 30th October 2012 About the Bodleian Libraries

The Bodleian Libraries of the University of Oxford form the largest university library system in the United Kingdom. They include the principal University library—the Bodleian Library—which has been a library of legal deposit for 400 years; major research libraries; and libraries attached to faculties, departments and other institutions of the University. The combined library collections number more than 11 million printed items, in addition to 50,000 e-journals and vast quantities of materials in other formats.

The Bodleian Libraries are currently seeking funds to catalogue the Day-Lewis collection so that it can become easily available to students of poetry and literature in the future. www.bodleian.ox.ac.uk

*The Newborn, Cecil Day-Lewis 1957 to celebrate the arrival of his son Daniel in the world.