I was first introduced to Liz Shreeve’s artworks in 2007 at the Stella Downer Gallery at Waterloo, an inner-eastern suburb of Sydney. This was Liz’s first exhibition apart from student organized group shows. I loved this exhibition for its gentle alignment of grids that were sculptured from paper and explored the principles of colour, contrast, tone, shadow and light.

My passion for white on white artworks was truly nurtured by Light Grid 1 [2007]. The precisely constructed artwork was quiet, tranquil and communicated an inner peace that was comforting to absorb.

While Regular Square [2007] used colour and more complex tessellations that cast shadows and generated a flutter of perceptions about the power of pattern and light. I was drawn to this work because it opened up possibilities about innovation and creativity, challenging me to appreciate Liz’s perceptive understanding of her flexible material. She has continued to exhibit at Stella Downer’s Gallery. I also saw her works at the Incinerator Art Space in 2012; she was part of the group show Paper Now where “each artist explored scale, repetition and the simplification of form to develop finely crafted and beautiful works”. Her most recent exhibition Liz Shreeve: Paper Tiling was at Factory 49, this is an artist run space that shows contemporary abstraction [non-objective] art.

The fifteen small works of curled paper on paper squares eighteen by eighteen centimeters explored geometrical imagery and the fragility of paper.

Horizontal and vertical cuts were applied to construct a uniform pattern that resembled the surface of a shell and the three dimensional curving of its shape was evident in Paper tiles 1.

In Paper tiles 2 the tilting of paper at the top and bottom of each perfectly cut square structured the simplicity of petals.

The inspiration of nature was palpable and replicated the sensuality of the forms.

I could almost feel the quivering passing of petals in the breeze creating patterns of movements interlaced with flickering shadows in Paper ties 15.

Softly rolling the paper to fashion a tiled roof captured the architectural reference that is such an influential theme in Liz’s artworks.

Water spouts carved from straight sides that almost spilt water was magically shed in Paper tiles 5. I felt that water flowed in a rhythmical wave across the surface of Paper tiles 6 shedding a cyclic regularity. 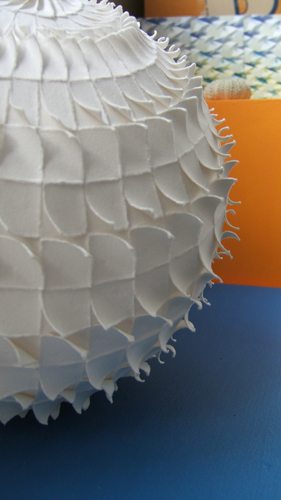 In Paper tiles 9, 10, 11 and 14 flocks of birds were soaring and hovering. The captured fleeting moments of airborne balanced formations mirrored the powerful pull of nature. The image of the wonder of the sky and the mystery of flight was etched across the works. The perfect juxtaposition of flight and stillness engraved a balanced serenity that was soothing to observe.

Cobbled streets scuffed with the footprints of time, solidarity and history permeated the tessellations of Paper tiles 12.

The ethereal lines of the curled paper lingered and floated with a tender fluidity that was calming. The mellow rhythm of harmony waltzed gracefully across the curves in Paper tiles 13.

The fifteen smaller works were poetic in essence and the simplicity of complex work executed with finesse was a verification and interpretation of the world observed by Liz Shreeve.

Nine larger works on 600gsm paper forty two by forty two centimeters where through patient observation Liz has mysteriously transferred the intricate patterns in nature to artworks of beauty that have been tenderly crafted in the curls and placement of the paper.

Her focus on the details of patterns is enhanced by her explorations of light and shadow. As I stood viewing the nine artworks from the side I was mesmerized by the diverse patterns of light fused with changing shadows.

The moment was magic. 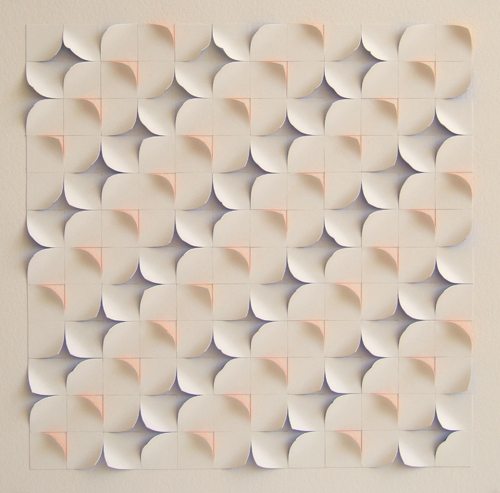 An optical illusion dance of patterns and textures was choreographed by regularity, balance and a serenity that evoked the philosophical underpinning of her work that was quietly confident.

The distinct patterns were shaped through the interactions of light, shadow and colour. The front surface of the paper was white and the undersurface an assortment of colures that varied in each artwork.

The use of colour in the larger works added another dimension and reinforced the sculptural nature of her work.

On the drive away from Factory 49 I was constantly reminded of the architectural nature of Liz’s work.

The patterns of windows, concrete formations, glass framed exteriors on buildings and skyscrapers were evident in the single square paper curl tessellated on the two and three dimensional surfaces of Liz’s artworks.

She is not only inspired by the patterns in nature but is also fascinated by the designs of contemporary and past structures. Currently Liz Shreeve is a finalist in the 2014 Woollahra Small Sculpture Prize exhibited at The Woollara Council Chambers. I look forward to sharing insights from an interview with Liz in my next week’s article.

From Cupid to Cartier; Rome to Renaissance, Restoration to Revolution, Regency to Revival, or the Romantics to Retro, for centuries we have created love jewelry