Black and white, the official ‘non-colours’ of Melbourne’s lifestyle

The French style bible L’Officiel recently established their headquarters at the so-called Paris end of one of most famous admired precincts of power and influence in Australia; the very modish boulevard Collins Street, Melbourne,

The street is named for former British naval captain David Collins (1756-1810) whose story is all around us here in Melbourne.

He established the first, although short lived English settlement at Sullivan Bay, in what is now known as Victoria.

Apart from being four times voted the most ‘liveable’ city in the world, Melbourne is the home of fashion, arts, society and culture in Australia.

The city has also always valued its notable French connections and so it’s the perfect place for the magazine to be.

It is not surprising to those who live here, although it may be to those in other states of Australia. This state was first known as Terre Napoleon for Napoleon Bonaparte, who as first Consul of France supported the proposal explorer Nicolas Baudin put forward to mount an expedition to antipodean shores in 1800.

Napoleon and Josephine were in their day also both leaders of style and living luxury icons and Baudin’s achievements added enormously to the sum of knowledge of Terres Australes. 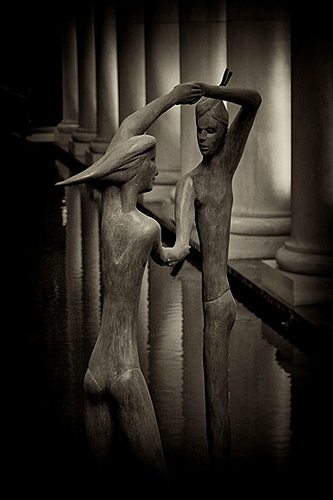 This is a fact still acknowledged and honoured here today.

While the British claimed Terre Napoleon after they defeated and exiled the French tyrant (hero), it was the French who made known the richness and diversity of all the State’s life forms to the world.

The French connection ensures Victoria is constantly presenting art and style at the forefront of fashionable museum practice. Napoleon: Revolution to Empire was an outstanding exhibition in 2012 and currently the Jean Paul Gaultier show proves fashion’s enfant terrible is still shining brightly, wowing crowds at the National Gallery of Victoria.

L’Officel is one of the world’s most enduring fashion magazines; founded in 1921, during the style era we know now as Art Deco, which derived its name from the 1925 Exposition Internationale des Arts Decoratifs Industriels et Modernes, held at Paris.

This elegant French design style of cool sophistication in architecture and applied arts specialised in luxurious objects made from exotic materials to an ever-expanding bourgeoisie.

The show celebrated living in the modern world and confirmed Paris’s place as the home and centre for modernity and the magazine certainly has its parallels.

Superbly designed, with timeless décor, the offices of L’Officel are in the too divine 101 Collins Street building, surely the ultimate address for business chic.

The creative team at L’Officiel are wanting to appeal to our flourishing avant-garde marketplace. 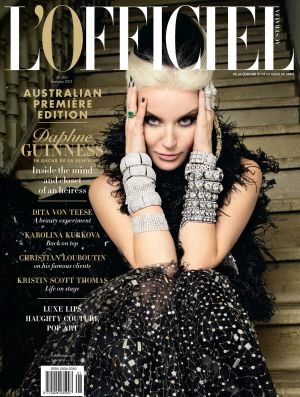 L’Officiel is a stunning publication, perhaps the ultimate magazine for the ultimate woman and a subscription, the ultimate gift. For this brand new edition, Daphne Guinness is on the cover dressed by Oscar de La Renta!

L`OFFICIEL Australia magazine is the 46 th. International edition of the Jalou Media Group Paris France.  L’Officel and L’Officiel Hommes is distributed in 24 countries around the world including Italy, the Netherlands, Morocco, Brazil, India and China.

The team of creative forces put in place will also be launching Les Editions Jalou into the digital sphere with Jalounet orchestrating the online strategy of conquering the web and dominating social media.

They will customize their product, which represents ‘the je ne sais quoi of French style’, for those people who stand at the forefront of new ideas questioning tradition and established ideas while embracing art ahead of its time, innovative and trendsetting.

The woman they are hoping to appeal to most will be from 24 – 50 years of age and cultivated, either living or aiming at what many would regard as a perfect life style.

This is provided by her own independent success and attitude as she embraces the world’s iconic hot spots, while seeking new destinations.

L’Officel is all about empowering a woman to reach her full potential in life, love and society. She will help others to thrive in the future by discovering unique aspects of new communities and help to bring them to the world Candescent Moon by Marion Borgelt in the foyer of 101 Collins Street represents change in many forms. She’s not meant to be dwelling in fantasy this lady and while she is sophisticated, she also has her feet firmly planted on the ground.

She embraces change, is informed, inspiring and emboldening for those around her and she’s in touch with getting the timing right through instinct.

It’s an ideal concept, one perhaps that has little basis in mainstream reality, one focusing on the individual self-assured woman and her dreams.

We all need role models and high ideals to work towards or nothing would ever be achieved. Ideals to reach for keep us on our toes, in touch with life and its many blessings.

This ‘ideal woman’ will have a reason of her own to want to keep in touch with the world through L’Officel. It’s as personal to her as the magazine is to the band of creatives who bring it to fruition each month.

Just like their model woman they want a better life too, one raised above urbanity and in a place where we can affirm our role as a member of an elite society, although not elitist, an individual leading progress who balances the past and present to invent the future. 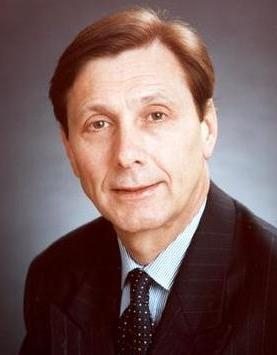 Peter Hammond, manager for the sole exclusive commercial agency in Australia and New Zealand, helping the contractual agreement between the licensor JMG Paris and the licensee in Australia!

But how do we know today what ‘better’ looks like? L’Officel wants to show us all the nuances of how this woman presents herself.

They want to help us all to metaphorically to inhabit a creative mind set, painting the picture or moulding our enterprise, one we want to present to others as part of our own inner and outer décor.

From the 20’s through the turmoil of the war years, L’Officel featured the stories, faces and fashion of France, bespoke for the European marketplace.

It’s perhaps fitting that in the very stylish Dior oriented 1950’s the creative typesetting visionary in his field Georges Jalou took over the magazine and established the high standards and values that today the corporation sees as its trademark.

His legacy is being carried forward by his daughter Marie-José Susskind-Jalou, who perhaps epitomizes the L’Officel woman herself, as she carries out her responsibilities. It was during the 90’s when the business came under the leadership of Georges’ heirs Laurent Jalou and Marie-José Susskind-Jalou who have since diversified, ‘focusing their brand on consumption sociology’.

She seeks to retain the publication at the heart of fashion, where high end European chic is celebrated as it remains connected to community, provides entertainment value, emboldens success and provides expertise in style selection.

While sophisticated, the lady that L’Officel appeals to is not a snob or a shackle of fashion. Quite the contrary.

She instinctively knows that to achieve the best result past, present and future must come together as a chic whole, both functional and directiona.

She’s at the heart of all she surveys, connecting art, commerce and creativity, while helping to reinvent 21st century enlightenment.